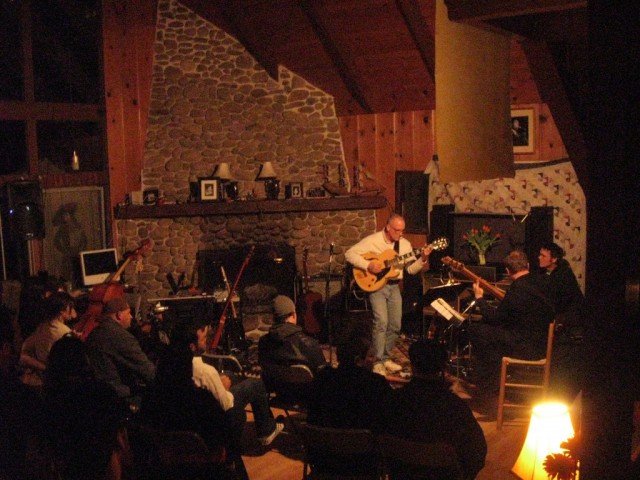 Depending on which Saturday night you decide to stop by Dan Fairchild’s house, you could be treated to a string quartet, a Brazilian guitar trio, or a Balkan brass band. Fairchild is one of several hosts of house concerts in Boulder and has been bringing artists and audiences together for almost 10 years. Fairchild says he first decided to host house concerts to hear more of the music he likes, especially music that may not be accessible anywhere else.

“We also like discovering new music. We learn about other local artists from the musicians [playing at the concerts],” Fairchild says.

Seeking out new and interesting music is a talent of Fairchild’s, as he is a musician himself. Fairchild has also joined musicians on stage, making for an inclusive and impromptu performance that adds to the individuality of these living room shows.

While house concerts have been a popular venue worldwide for independent artists for many years, Boulder’s scene is still in its infancy and has experienced its own setbacks. However, with more hosts, as well as online resources for attendees and musicians alike, house concerts are being resurrected and filling a missing piece in Boulder’s cultural community.

Not your typical house party

A few distinctions separate house concerts from just another party with live music.

The first distinction revolves around the musicians. As opposed to coffee houses or small bars where music takes a backseat to the guests, house concert goers are there to see the music first and socialize second. The other distinguishing characteristic is that these events are open to the community and feature potlucks and donations to the artists.

Sandra Wong, a
professional musician who plays the violin, fiddle and nickleharpa (a
Swedish folk instrument), describes the audience as attentive and
interactive. While the listeners may not be familiar with her music,
she says that it is obvious they are there to experience new music and
possibly find a new connection within their community.

“House
concerts are a very safe place to try new things,” Wong says. “Three of
the last house concerts I did were prior to recording new repertoire.
It was new material and a safe place to give voice to this material in
front of an audience who is in total support of what we are doing.”

One
of the performances Wong uses to illustrate her experience was a
concert she played a few years back. The concept was simple yet
innovative: have a group of Boulder folk musicians play an all-Bach
concert on nontraditional instruments. Wong said that although this
event was far beyond the musicians’ comfort zone, “… people told me it
was one of their favorite concerts.”

Joao
Junqueira, a Brazilian guitarist, agrees that performances at living
room shows can be more creative and daring, given the intimate
atmosphere.

“The
concert was three guitarists; they liked a lot of improvisation,”
Junqueira says about a recent show he performed at Fairchild’s house.
“They don’t play the music that resembles the music you hear in a
commercial circuit. It’s the kind of music that doesn’t draw more
peoplebecause it’s more artistic. It’s hard to relate to it in mass society.”

But
this is not mass society; this is a grassroots community dedicated to
bringing friends, family, neighbors and coworkers a unique experience,
hence its growing popularity among attendees and performers alike.

Fairchild
ascertains that some of the importance of these intimate shows lies in
both the exposure the musician receives as well as the community that
revolves around it.

“The
social connection and potlucks have been great,” Fairchild says about
the house concert dinners. “I have met more people this way than any
other I can think of … That includes meeting, and in some cases
becoming good friends with, the musicians. There are a lot of people
who don’t typically go to clubs to see music, but they are comfortable
visiting someone’s home … It ends up being quite a party before the
music and during the breaks, but [during the performance] people are
rapt. It’s a moving experience for a lot of those who come.”

Before
the show begins, guests bring a myriad of foods to share and have a
chance to meet each other as well as the musicians playing that
evening. There is also a collection taken up for the performers as well
as opportunities to purchase albums after the show.

Junqueira
speaks of how artists in his native Brazil play at these informal
events frequently. He says that in this way, the community is rewarding
the artist for their contribution and talents. As for the independent
artists playing at U.S. house concerts, he says, “[U.S.] society
doesn’t really give an artist all the possibilities to make his work or
do his job as an artist.”

Wong
also agrees that the community and donation component is as important
as playing at widely publicized venues. Wong estimates that house
concerts make up approximately 25 percent of her revenue as a
professional musician, and that they serve as a complementary element
to the rest of her performances. She adds, “if they weren’t there,
there would be a missing hole.” With the high overhead cost of
producing a show at a private club, Wong maintains that house concerts
enable both the emerging musician as well as support of the independent
music scene. “If I do a concert locally, I gravitate towards house
concerts almost exclusively,” says Wong.

Landowners and the law

Even
with its growing popularity, house concert hosts have had their own set
of challenges. In 2007, several complaints were filed against
homeowners in Nederland regarding their frequency of house concerts, as
well as concerns about abuse of the land.

“We had some complaints that home concerts and events were going on. After some
zoning and rule investigation, we found that these concerts were not
allowed to be occurring at the level they were,” says Dale Case, land
use department director for Boulder County.

The
hosts of the events then appealed the determination, which then went to
a board of adjustment. The director’s determination was upheld that one
host did, in fact, violate a rule regarding land use. That led
homeowners and officials to look at ways to mitigate land use and the
potential impact on neighbors. Regulations were discussed, and a
resolution was finalized in March 2008.

“It
gave some guidelines for folks and helped protect neighborhood
character,” Case says of the new regulations, which include a
stipulation on group size (no more than 99 individuals), and frequency
(no more than 12 times a year per residence). Case adds that since the
determination and resolution has been instituted in Boulder County, his
office has not received any similar complaints regarding rules or
zoning.

Because
both hosts and neighbors have made those compromises, house concerts
are now clearly defined and protected for the enjoyment of the
community. These living room events are as organic and evolving as
Boulder itself and offer an excellent alternative to be shared.

For information on finding a concert to attend or hosting one yourself, visit www.concertsinyourhome.com.