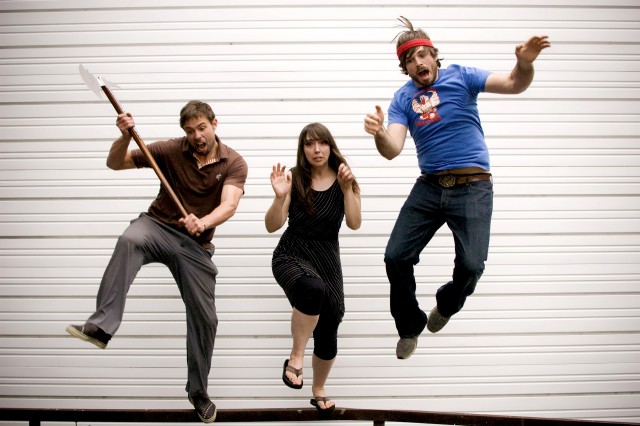 Idaho indie wunderkinds Finn Riggins are
on quite a roll, touring sizeable venues this fall with the likes of
Built to Spill and showcasing the trio’s diverse and wonderful new long-play Vs. Wilderness.

Multiinstrumentalists and University of Idaho music graduates Cameron Bouiss, Eric Gilbert and Lisa Simpson having been playing hundreds of shows a year since their inception in 2006. Finn Riggins, with their joyfully eccentric indie-pop workouts that juxtapose XTC, Blondie and the Poster Children, might not yet attract the kind of scenester crowd that flocks to the latest Sonic Youth- or Slowdive-inspired outfit, but the band’s calculated harmonies and impressive poly-rhythms are irreverent and beautiful, as are the group’s quirky lyrics.

And as keyboardist/guitarist/singer Eric Gilbert told me in a recent interview, Finn Riggins’ word-ofmouth momentum and rampant touring (which brings them to the tiny Laughing Goat coffeehouse in Boulder on Sunday) makes the blossoming young band “a sustainable project.”

Boulder Weekly: First off, how did this band get together and how have the initial stabs at touring gone?

Eric
Gilbert: We all met at the University of Idaho in Moscow, Idaho, around
2000 and collaborated in several projects before moving to Hailey,
Idaho, in August of 2006 and forming Finn Riggins as our new full-time
focus. The name was loosely inspired by two small Idaho towns we often
drove through, but the vision was to create a character name for which
we could write the story to. Since then we’ve been touring the U.S.
pretty heavily, and it’s been going great. The last couple of years
we’ve played over 500 shows in 37 states and one Canadian province.
It’s all been pretty incredible on multiple fronts and the project has
grown a lot over this relatively short time due to the amount of
playing we’ve been doing and the focus we’ve had. We tend to take one
step at a time. Our general goal is to make this a sustainable project
so that we can continue to write and record albums and continue to play
our music all over North America and beyond.

BW: What impressed me straight about Vs. Wilderness was the inability I had to immediately pin down your influences.

EG:
This is something we struggle with as well. We truly struggle to
pinpoint any direct influences, musical or otherwise. [Finn Riggins]
came out of about seven years of gestating in a very free-form and
open-minded music scene in Moscow, where we experimented with all kinds
of different takes on writing and performing original music. Combined
with a lot of broad listening — I was a DJ at KUOI (the college radio
station at U of I) — we were all in music school and Lisa and I were
taking writing classes and art classes and whatever else, as well as
seeing tons of touring bands coming through. When we moved to Hailey
and began this project, we all agreed on a couple of things: we wanted
to only perform music we wrote, we wanted to tour and play live a lot,
and we wanted to be open to opportunities and ideas of any sort. And
from there what we’ve created has been a product of us as filters for
all that we had consumed and experienced. That’s always changing,
especially with all the travel we do and all the different bands and
artists we come in contact with. From the get-go we considered it a
sort of art project more than a band … I would agree that it’s morphed
pretty clearly into being a band, but our attitude and openness toward
it hasn’t really changed. Things just seem to keep happening, but a lot
of that obviously has to do with thefact that we keep paddling this boat and keeping our eyes and ears open.

BW:
Your lyrics are curious: giraffes and a whole load of other presumably
zany but effective things. Who writes them and what would you say is
the overall vision for what Finn Riggins’ lyrics have to say?

EG:
All three of us are very involved in the writing process, and it’s very
balanced when it comes to the music, [but] Lisa and I tend to write
most of the lyrics. Our approach to lyrics is as varied as our approach
to the rest of what we do. There’s no overall vision. It’s a very
case-by-case basis. However, Lisa and I both studied writing to
differing degrees in college and take lyrics very seriously … even
when they’re not serious at all.

EG:
Lisa usually takes the lead with most of the crafting of vocals, and
coaches Cam and I through our parts if necessary. Lisa’s been singing
since childhood; [she’s] by far the most adept at singing, both lead
and harmony, but all three of us were in choirs in college and have
been singing “professionally” for several years now. We don’t tend to
overwork our vocals too much; most of it tends to be what comes out
when writing the song and what feels natural.

BW: What’s the funniest thing that’s happened on the road so far?

EG:
Impossible to claim one as the funniest. So many random and incredible
things happen on tour; it’s a constant challenge to convey it to
others. Sorry I can’t come up with something simple like my pants
falling to my ankles in the middle of a set or one of us getting locked
in a truck-stop bathroom or something like that. We’ll keep working on
it.