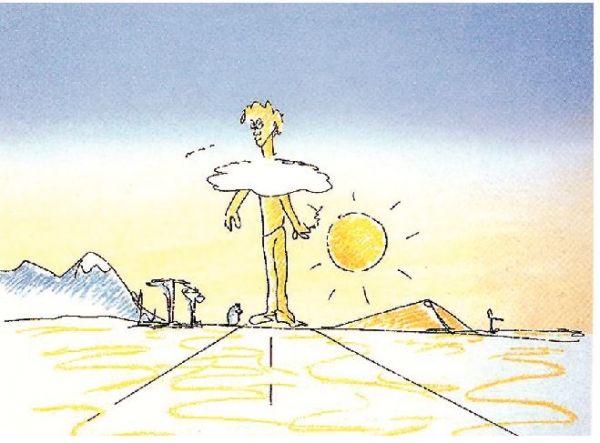 Now, 30 years after his death, a touring show of nearly 100 of Lennon’s drawings and song lyrics will be in Boulder Nov. 5-7 as part of the exhibit IMAGINE — The Art of John Lennon.

“Many people know Lennon as a Beatle, a peace activist, a spokesperson and a luminary, but few know him as an artist,” says Rudy Siegel, a producer at Legacy Productions, who works in conjunction with Yoko Ono and Bag One Arts to bring Lennon’s artwork to the masses. “It’s yet something else to discover about the man, the myth and the legend.”

The show, which will benefit the Boulder County AIDS Project, consists of a limited edition of lithographs, serigraphs and copper etchings of drawings done by Lennon between 1964 and his death in 1980. The simple, expressive lines of his whimsical drawings in pen, pencil and Japanese sumi ink chronicle Lennon’s life, with a heavy presence of self-portraits.

“There’s a lot of similarities between how he wrote his songs and how he drew,” Siegel says. “With a few strokes he was able to capture an entire phrase or draw a point in time in his life. He got down on paper what he wanted to say very simply and quickly, both lyrically and with his artwork.”

Lennon’s interest in visual art dates back to his early childhood, when he created a collection of his quirky drawings and satirical writing in a fictitious newspaper he called The Daily Howl. He went on to attend the Liverpool Institute of the Arts between 1957 and 1960, before being catapulted into stratospheric levels of fame as part of The Beatles.

“People like me are aware of their so-called genius at 10, 8, 9,” said Lennon in an interview with Rolling Stone in 1971. “I always wondered, ‘Why has nobody discovered me?’ … Why didn’t they put me in art school? Why didn’t they train me? A couple of teachers would notice me, encourage me to be something or other, to draw or paint — express myself. But most of the time they were trying to beat me into being a fucking dentist or a teacher.”

Lennon found the artistic encouragement he desired when he met Ono in 1966 at one of her art openings in London.

“He started to feel like he wanted to do a gallery show,” said Ono in an interview with the Boulder Weekly in 2008. “He said, ‘Well, I can’t do it because I’m a Beatle.’ I said, ‘What kind of nonsense is that? Of course you can do it!’ But he was right. … There was a kind of art-world snobbery of, ‘Oh, he’s just a pop star. He’s dabbling. We’re not going to show that.’”

For the past 18 years, Ono has worked with Legacy Productions to organize and coordinate 15 to 20 shows of Lennon’s art per year across the United States. Ono has faced criticism from those who claim she is exploiting the work of her late husband, especially after she added color to a number of prints of Lennon’s drawings, including several that will be on display as part of the Imagine show. According to Ono, gallery directors had suggested years ago that she add color to the pieces to bring more depth and vibrancy to Lennon’s simple line drawings. She has defended her promotion of Lennon’s artwork, stating that her goal has always been to share his work with his fans and spread his message of love.

“Hundreds of thousands of people have come out over the years to see John as an artist in the true sense of the word. That’s really the essence of what this whole program is about — allowing people to come together, pun intended,” Siegel says. “We’ll have the wealthiest person in town standing next to someone who doesn’t have a penny in their pocket and they’ll be hanging out, enjoying the exhibit. Wherever we go, there’s usually a lot of peace and love in the room — from Portland, Maine, to Portland, Ore., and everywhere in between. It’s a powerful gig.”

IMAGINE – The Artwork of John Lennon will
be at 902 Pearl St. from Nov. 5 to Nov. 7. Proceeds benefit the Boulder
County AIDS Project. A suggested $2 donation will be requested at the
door. For more information call 303-444-6121 or visit www.bcap.org.