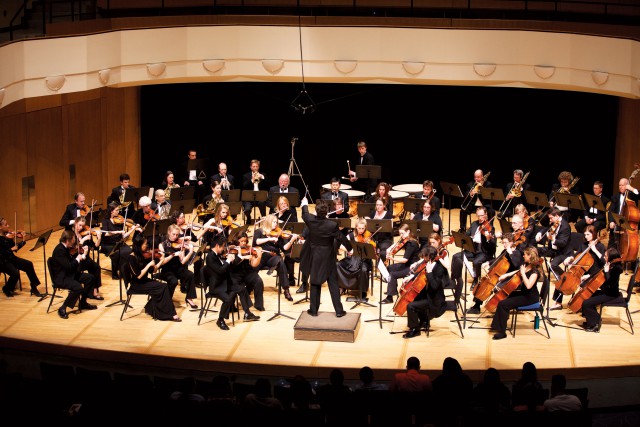 It wasn’t really planned that way, but the Boulder Symphony’s next concert arrives just in the nick of time.

Only days after Boulder descended from record highs to record lows, into what feels like the depth of winter, the orchestra and conductor Devin Patrick Hughes are offering to bring listeners “Out of the Darkness” Saturday evening (7 p.m. Nov. 22 in Boulder’s First Presbyterian Church: http://bouldersymphony. org/category/tickets.html).

The program features two particularly sunny and affirming works that are ideal antidotes to winter shock: Beethoven’s Symphony No. 4, and Aaron Copland’s Appalachian Spring, performed in its original version for 13 instruments.

The concert’s title refers specifically to Beethoven’s symphony, written in 1806. At the time, Beethoven was coping with the onset of his deafness and facing the isolation from society that resulted. Considered one of the darkest periods in Beethoven’s personal life, he nevertheless produced a cheerful and uplifting symphony.

“The Fourth Symphony shows that although he’s going through all the health and the social problems and anxieties that he was having because of his deafness, he’s showing what his heart reflects,” Hughes says. “Even though people are calling him a misanthrope, he’s showing what he has to share, and how he feels about everything.

“He really kind of stepped aside looking toward a simpler time, and Haydn is even evoked in the last movement, which is this really fast, upbeat dance movement like Haydn would have written.”

Copland’s Appalachian Spring similarly serves to lift us out of the gloom.

“It has this essential American purity, sort of a longing for a simpler past,” Hughes says.

That is particularly true, he says, of the original version for 13 instruments. The score was written in 1944 as a dance piece for choreographer/dancer Martha Graham. After the successful premiere of the ballet, Copland was asked to rescore the music for full orchestra, and it is that version that is better known. But Hughes believes that the original chamber version captures the essential spirit of the piece better.

“Copland wanted a simple elegance that I think the work just begs for,” Hughes says. “That comes way easier [with the chamber ensemble], as opposed to when you have all of this brass and all of these extra percussive things that kind of jam it down your throat.”

If overcoming darkness is one theme of the program, the character of chamber music is the other. The original version of Appalachian Spring is literally chamber music — only one player on each part with no larger sections to fill out the sound — but the Beethoven will be performed by a reduced ensemble that is close to chamber music as well.

“In many ways, this is a chamber concert that we’re doing,” Hughes says. “I think that’s way more effective [for the Beethoven symphony] than a big romantic sound. There’s just a great purity and elegance, and connection that you can bring with the audience when you have a smaller orchestra.”

Performing in the style of chamber music, there is less for the conductor to do than with the full orchestra. In smaller groups, the players are able to interact directly with one another and may not need a conductor.

“These [chamber] concerts are really always enlightening to me, because they make me re-imagine what my role is,” Hughes says. “Less of a time beating is necessary. Here it’s more an idea of OK, we’re all making music. You don’t really need a conductor to keep the group together.”

Chamber performances also help to build ensembles. They give the individual players performance opportunities that they don’t have in the full orchestra and give them a more independent role in the interpretation. Hughes is clear that this is part of the reason the Boulder Symphony has a chamber music series and that he programs works for smaller orchestra.

“We conductors don’t want the players to feel like they’re relying on us,” he says. “If all conductors tried to get orchestras to play without them, maybe our profession would disappear — but that is actually kind of the goal.”

The point is not to put himself out of a job, but to make the players in the Boulder Symphony, most of whom are amateurs, more self-reliant. But is it working?

“’In the first rehearsal, I would say everybody was 70 percent more prepared than they normally are at the first rehearsal,” Hughes says, smiling. “I think people know that it’s a smaller group, [and] we have less rehearsals to get it together. The smaller the group, the more demanding it is and the more responsibility there is on each individual player. So it’s a really good exercise for the orchestra.”

All that, and a little musical sunlight to pierce the gloom.