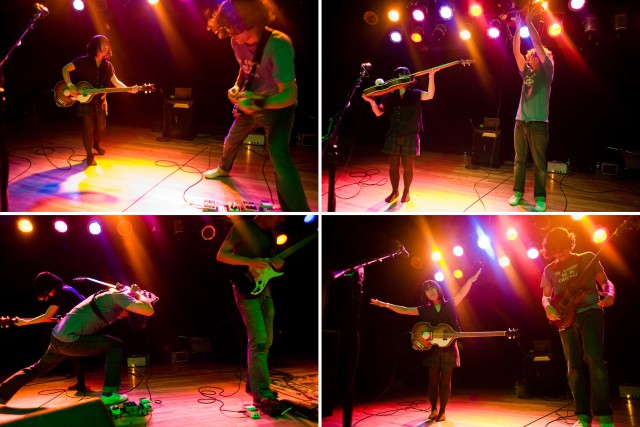 Deerhoof concerts have always been uniquely fun, but lately more of a festive connection between band and audience has been on the quartet’s mind, according to singer/bassist Satomi Matsuzaki, who lived in her native Japan until the mid-’90s.

“For Breakup Song [Deerhoof ’s 10th album, released Sept. 4], we tried to create a feeling of party dance music,” she says. “When we played shows in the past, I noticed that sometimes our music is not easy to dance to. Then, [when] I moved to New York this year, I went to dance parties and enjoyed it very much.

“Questlove [of the Roots] plays DJ every Thursday at Brooklyn Bowl. Once all the Deerhoof members went there for the after-party of the show, which we played with Questlove. We had so much fun. Questlove’s DJ style reminded me of our music. He uses short clips of popular dance hits to make audiences keep dancing and just keep going. Kind of busy and mind-bogging in a way. I got a hint from that when we made this album.”

Deerhoof formed in San Francisco in 1994 and acquired its energetic and brilliant Japanese-born frontwoman Matsuzaki in 1996. The sweetly bombastic quartet juxtaposes explosions of dark indie madness with sincere Japanese cuteness and deft musicianship.

Drummer Greg Saunier, who has struggled with Tourette syndrome, spastically throws himself at a comically small drumkit like Keith Moon channeling Gene Krupa. Guitarists John Dietrich, a founding member, and Ed Rodriguez (who joined Deerhoof in 2008), joyfully trade staccato licks not unlike Adrian Belew and Robert Fripp on the classic King Crimson tune “Neal and Jack and Me” (sans soloing). And Matsuzaki, standing at around 5 feet tall, holds it all together with a tasteful, thumping bass that appears larger than she is. She defines the band with the creative, loveable and sometimes bizarre lyrics she sings in a babyish (yet deeply beautiful) voice.

Matsuzaki has bounced around from San Francisco to Tokyo to London and New York the past few years, and the rest of the band has lived apart as well. Intra-band drama and ossification often make it difficult for any band to attain or sustain musical success, so it’s incredible that Deerhoof, which achieved some mainstream exposure in the past decade with the critically acclaimed album The Runners Four and by opening a few shows for Radiohead, has been able to continue to evolve, “working together like a family.” The band continues to play stripped-down, intense concerts while taking its studio work as “out there” as possible.

“We don’t treat live shows and albums same,” Matsuzaki explains. “We make an album as if we create a sci-fi movie. There is no technical limit, like making Transformers! It’s a fairy tale and you can make it up as far as your imagination goes, but we don’t try to recreate those sounds for shows. We are trying to rearrange all the songs from scratch. We even change the structure. The idea and bones remain.

“Why would audiences wanna listen to exact same music when they have already listened to [the recording]? That doesn’t sound fun to me. I expect thrilling liveliness and improvisations from live shows. We strip down the songs to leave spaces for us to be able to throw our current sparkle ideas on stage. Every show is different for us.”

Romantic tales like the sprightly “Flower” — with its “Let it go / leave it all behind” chorus — will surely show concertgoers at the Hi-Dive in Denver on Tuesday a different, more personal side of Deerhoof.

“Relationships matter is the simplest theme that everyone relates to,” Matsuzaki says. “I think about communication all the time. [Breakup Song] is not just about love relationships but also friendships. We all had breakups in the past and moved on. The album encourages you to move on, be happy and dance! It’s time to party. Fun!”