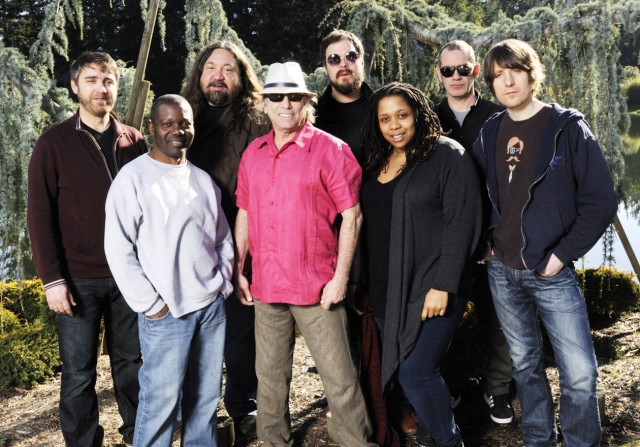 In the wake of the pitiless thrashing that Sandy delivered to Northern New Jersey and the NYC metro area last November, plenty of musical artists rallied together for benefit projects (most notably the 12/12 Concert) to aid families and towns along the coast. A few of the big-name artists, of course, have famously drawn from the uniquely calloused mythos of boardwalk towns, strip-mall suburbia and big city borough life and woven it into their careers — Springsteen, Billy Joel, Bon Jovi — but add to that list Mickey Hart, who is mostly closely associated with a band from San Francisco.

Hart still carries a pretty salty Brooklyn brogue, having been born there and grown up on Long Island. The real-time images of Sandy’s massive surge and its mind-bending destruction prompted Hart to write a piece about his old hood as a benefit download for Sandy relief.

“Mickey was watching the news reports of this storm unfolding on TV, literally while was it was happening,” Schools says, “and it all pretty much came to him at once. Lyrics, song structure, the whole unifying idea. It all happened just like that. We got in and arranged it and — presto, change-o — the thing was done. We set up the release and that was it. We just got it out about a week ago, and it’s doing some good already — we’re really happy about getting it done so fast.”

The single spearheads a full two-hour release from the Mickey Hart Band, which also includes four tracks from the band’s last studio effort Mysterium Tremendum, a 2012 recording project that Hart based on the processed signals of galactic and intergalactic light waves captured through observatories and labs at Penn State and Lawrence Berkeley, as well as some live cuts from the band’s last appearance at the New Jersey coast in August 2012, including Dead covers like “Scarlet/Fire” and “Brokedown Palace.” Proceeds from the release go to Clean Ocean Action, a relief organization that has organized more than 3,800 volunteers since last November.

Fans catching the band this time around on tour will likely hear some of this material as well. Schools got the job of picking out which Dead covers to include in the set.

“You know, I’m not sure how I got that mantle,” he says and laughs, “except maybe because I’m the guy who accepted it in the first place.

“But the real motivator for me, I think, in picking out which Dead songs to do was figuring out which ones the vocalist can really sell. And I don’t mean that in the commercial sense, necessarily. But … like when you hear Crystal doing her sort of bluesy, gospel-y take on ‘Brokedown Palace,’ you really believe what she’s singing and feeling, that she’s communicating the song the way it was meant to be sung.

“Crystal really wasn’t a Dead fan when she joined the group, but over time she’s been listening more and more to the stuff, and she’s really getting into it, finding ways to approach the material. She was just saying ‘I really want to try “Greatest Story Ever Told,”’ and I think she’s such a terrific, incredible talent that she can take it and make it her own.”

Schools, of course, is best known for his role in Widespread Panic, one of the more song-centered of the topflight jambands on the road today, so his own musical instincts are deftly balanced between carving out a deep groove for jamming and meticulously supporting a vocals-driven tune, a perfect grounding for a band like Hart’s that relies on tactical use of the drummer’s spacious-meandering pedigree as a foil against relaxed but keenly mature song structure.

Ultimately, for Schools, the song comes first — doesn’t matter how hard you can jam, everything up there has to serve the song.

“That’s it, exactly, that my mantra. ‘Serve the song.’ This band is an ensemble, everybody has a part to play and everyone contributes, but it’s not about blowing as hard as you can. It has to be about serving the song, making the thing organic. My main goal is just not to step on anyone else or trip them up.”

Which left us thinking about his other projects — Stockholm Syndrome, an upcoming project with Todd Snider. And Panic. How do you trip up a guy like Panic guitarist Jimmy Herring?

“You can’t trip up Jimmy, man, he just always lands on his feet,” Schools says. “And anyway, you know what they say. ‘If ya drop a brick, drop three more and call it jazz.’”