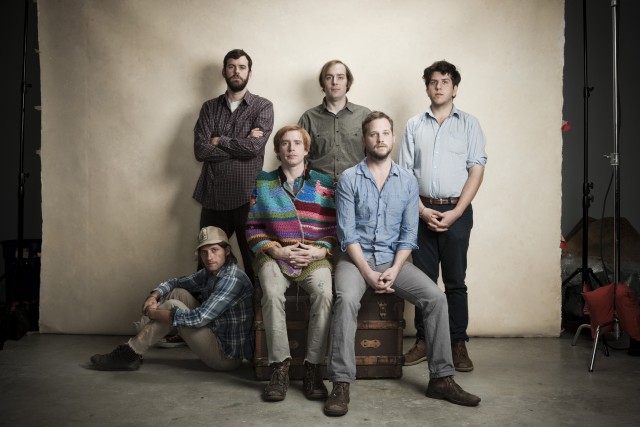 Bands are chemistry experiments, and the introduction of a couple new elements can change the mix in not readily apparent ways. Dr. Dog has been together for more than a dozen years and released six albums of widescreen psych-pop, redolent of hooks and rather rollicking rock energy. Though their approach hasn’t necessarily changed — it still sounds like a Dr. Dog album — the addition of drummer Eric Slick and multi-instrumentalist Dmitri Manos has had a dramatic impact on the new album, To The Void.

“[Slick’s] open to anything and by far the best mechanical player in the band, with the best feel. He’s probably the best musician in the band,” says bassist Toby Leaman. “We’re a different band, and the four of us that have been in the band are all better players, all have a better idea what our roles are and what our strengths are.”

Slick’s addition since the last album has made a subtle difference in how the band writes, which — along with Slick’s accomplished playing — is partially responsible for Be the Void’s irrepressible energy. Over the years, the members of Dr. Dog developed a manner of bringing their songs into the studio partially completed. After laying down what they had, they’d encourage everyone to make suggestions for the rest of the parts, whether they play the instrument or not.

“So guitar lines get written by people that don’t necessarily play guitar. Same thing with drums, bass and keys. It’s whoever has the best idea, that’s who gets to write the part,” Leamon explains.

Such a democratic, open-ended process tends to result in more and more recording layers, sometimes to the point of overcrowding the sonic field. While they would try to peel the production back, the songs would still sometimes sound stiff from porting around so many sounds. Slick helped fix this issue, driving the band toward their most rocking effort to date. It’s much more upbeat and affirming than 2010’s dark, dour, life-questioning Shame Shame.

“Eric is really good at coming up with parts,” says Leamon. “You don’t have to spend a lot of time filling in the gaps, which is what we did before. We overdubbed heavily. A lot of times the rhythm was the last thing to be solidified. So we’re doing all this hyper arranging to get it to sound the way we wanted when really what we needed was just for it to move. I feel all the stuff on this record does that.”

Indeed, Be the Void features a spirit akin to their live shows. Absent the 25 or so musicians needed to replicate all the multi-tracked instrumental nuance occupying their songs, their performances have always leaned more toward the swaggering ’60s-garage side of their psychedelic antecedents.

That energy can’t always be measured in beats per minute. “Do the Trick” has a ballad pace, but creates plenty of momentum with its pulsing keyboards, tasteful harmonies and lively, varied percussion. Others, like “These Days,” strut like a forgotten Strokes trying to find its way back to “Last Nite.”

The band even delivers a raging live freak-out in “Warrior,” which sets a riff reminiscent of the Kinks’ “Lola” on the Jefferson Airplane. “It’s just recorded live and it was a party,” says Leamon. “Just a straight up party.”

The addition of Manos was intended to improve their ability to bring their multi-faceted arrangements to life. Capable of playing several instruments, he’s taken a load off rhythm guitarist Frank McElroy and keyboardist Zach Miller, who used to have to work out all the live extras between themselves.

But like the addition of Slick, Manos’ presence also seems to be pushing the band toward a less overdubbed approach.

It’s a direction the band has tried to move toward since 2007’s obsessively beautiful We All Belong, which they fiddled with for practically two years. One problem is that between songwriters Leamon and guitarist Scott McMicken, the band can come up with as many as 50 songs every album cycle — requiring them to narrow the pool down ahead of time, since it’s hard to learn that many songs well. The other is that once you’re in the studio, it’s hard to resist tarting the songs up.

“I think as a recording band we’re going to move a little more in that live direction. The ambition for the band — on probably the last three records — has been to get the songs, get the demos learned, go woodshed as a band for a couple weeks, then record it live,” Leamon says.

“Of course, I think what I’m saying now I’ve said about every record since Toothbrush. We shall see.”