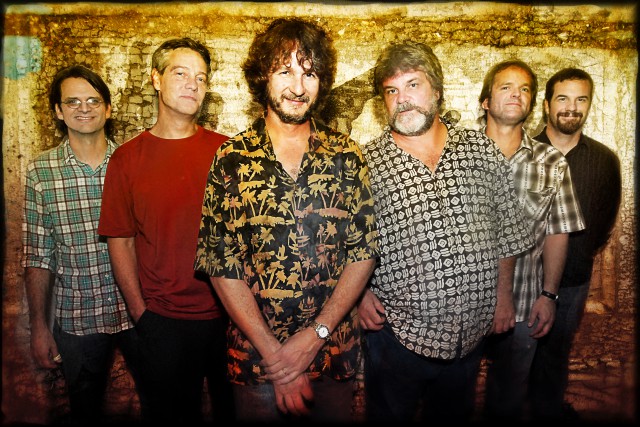 “Vince was like, ‘Let’s just call it Leftover Salmon,’ and I said, ‘Okay, sure. Why not?’ That’s how it all got started,” Drew Emmitt reminisces about the Salmon’s first show at the Eldo Brewery and Taproom in Crested Butte back in 1989. “Since we were calling it ‘Slamgrass,’ people took it really literally and slam-danced to our music. That was pretty crazy. I’d never seen anything like that. People just went ballistic. It was amazing.”

Twenty years is a long time for any band to stick together. Just ask Emmitt or Vince Herman, co-founders of Leftover Salmon—the motley pride of the national jamgrass movement that keeps one foot dancing in the Boulder foothills with the other boogying in Crested Butte. Celebrating their 20th anniversary this week, the band has wreaked musical havoc on stages ranging from grungy urban bars to mountain brewpubs, while bouncing around prestigious summer affairs like Del McCoury’s annual DelFest and the High Sierra Music Festival.

More than anything, Leftover Salmon’s twenty-year longevity is probably because of the ongoing semi-haitus that began in 2005, following an announcement on the band’s website that read in part, “As of right now the future of Leftover Salmon is uncertain but the band is not breaking up, just taking a break.” That break lasted until June 2007, when the band played the Telluride Bluegrass Festival billed as “Drew Emmitt and Vince Herman and Friends.” Since then, Leftover Salmon has continued to perform a handful of sporadic shows here and there each year to a growing throng of fans thirsting for their special hybrid aptly titled, “Polyethnic Cajun Slamgrass.”

Or as Emmitt explains the band’s melding of styles: “Vince was really into the cajun thing and different kinds of ethnic music, and I was really into the bluegrass and the rock thing. So it was a term that Vince came up with of loosely describing what we do. Basically it just means that we play whatever music we want to play; we throw it all into the pot and see what happens.”

In other words, it’s one of those things you have to experience to appreciate. A live band through and through, Salmon shows are coveted affairs for die-hard fans, and for good reason; since their 2007 reunion, you can still count the number of performances they play each year on both hands. But as for side projects, things are blossoming for both Herman and Emmitt, which no doubt brings an added energy and freshness to those few Salmon shows that do occur.

“Vince has been doing his thing with Great American Taxi,” says Emmitt, “[and] I put out a record with [The String Cheese Incident’s] Bill Nershi that came out in September — The Emmitt-Nershi Band. That’s been going real well. We did a huge tour in October; we basically did the whole country. So our main focus has been promoting that record.”

Meaning more of the same as far as number of Leftover Salmon performances?

“Exactly,” says Emmitt. “We’ve just kinda been doing a few shows here and there — mostly just festival one-offs — and focusing on our side projects. But it feels like we’re cranking Salmon up a little bit. We’re not gonna tour really — we’re doing a couple shows in the spring in [San Francisco] and one show in Salt Lake City. And then we’re doing the Telluride Bluegrass Festival, which we’re really excited about. We’re starting to break out a little bit, but there’s definitely no real plan to get on a bus together at this point. We’re trying to keep it a special thing right now and not overdo it. That seems to be the plan.”

Meanwhile, the 20th anniversary celebration began at the Eldo in Crested Butte on Monday and will continue at the Boulder Theater on Wednesday, wrapping up at Denver’s Ogden Theater on Saturday. On top of the shows, fans can tap into the Leftover Salmon 20th anniversary celebration page at JamBase. com where, as Emmitt says, “It’s like twenty years of Salmon you can download — there’s interviews and all kinds of cool stuff on there, so that’s kind of our big thing right now. It’s the closest thing to people being able to get a new Salmon record.”

“It’s really significant for us to come back to Colorado and play since this is where we started,” he continues. “The New Years shows in 1989 were the first shows we did as a band. Every year it’s a milestone for us, but this is very significant because it’s 20 years. It’s a big milestone.”