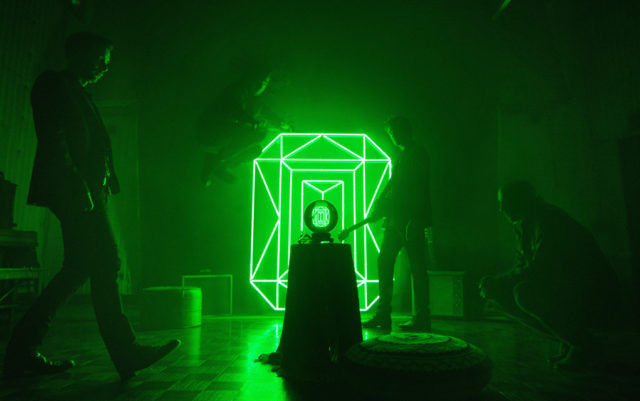 “All of our representatives are currently busy. The current wait time is seven years,” a recorded voice says when you call 1-877-VIDE-NOIR. The next cycle through it says the wait time is four eons. You’re then taken on a journey of choices to either the land of psychic moonbeams eager to predict your future, a fictionalized radio station promising to reveal “the secret truth of the cosmos,” or an option to purchase a “consciousness neutralizer,” although it’s currently backordered.

There may not be a final destination, but you could get lost for hours in the maze of options and pre-recorded storylines, with songs from Lord Huron’s latest release, Vide Noir, playing softly in the background.

“I believe the music stands on its own,” explains lead singer Ben Schneider. “But if you want to dig deeper, go on some other adventures, they’re there for you.”

Schneider is the visionary behind the indie-folk band Lord Huron, enlisting his childhood friends from Michigan to join him in L.A. after a few initial solo EPs started drawing attention in 2010. Creating a band wasn’t always Schneider’s goal, however, originally moving to the city to pursue visual art and graphic design. But Lord Huron has become quite the creative outlet for Schneider, as the band’s albums all come with a rabbit hole of artistic side projects. Their breakout release, 2012’s Lonesome Dreams, uses the stories of George Ranger Johnson, a fictional Western dime novel author, who, however made-up he may be, has his own website. 2015’s Strange Trails chronicles the emotions, conflicts and tragedies of the World Ender biker gang, also the subject of a comic book.

That’s not to say there isn’t at least a little bit of Schneider in the characters he embodies and the stories he tells.

“I think it’s pretty essential that it starts from some place true and from experience just to make it relatable and real and emotional,” he says. “But from there, I kind of let it spin off into other things and explore it from other points of view or other extreme scenarios that might better illuminate some of the ins and outs of the human experience.”

Vide Noir, more or less, shares the story of one man’s desperate quest for… “something,” Schneider says, following the character on “a nighttime odyssey through a city” and ultimately himself. The album is full of intrigue, existential crisis and romance, with a fatalistic flare, set to the backdrop of ethereal synthesized echoes and guitar riffs. However fictionalized the band’s inspiration may be, it’s easy to correlate Lord Huron’s evolution from whimsy outdoor ballads to celestial city explorations with the story of Schneider’s own life progression.

Having grown up in the Midwest, the move to Los Angeles came with its surprises, Schneider says, some of which at least seem to have influenced the latest work. Most of his childhood experiences centered around his adventures outdoors, discovering and learning about the world outside himself. But moving to L.A. caused the artist to turn inward, to venture into the unexplored self.

“Strangely, moving to a big city, although it’s a time to explore and there are a lot of interesting things to do, I’ve found it to be more of an inward exploration for me,” he says. “In a strange way, I’ve turned more towards my interior life and figuring out what’s going on there. It’s just as complicated, and I’ve found mysteries vast as the world outside.”

For Vide Noir, Schneider says, the band had a certain sound in mind, looking to capture some of “the urgency and propulsion of our live show and integrate that into our recordings.” So, they enlisted the help of producer Dave Fridmann of Mercury Rev, The Flaming Lips and Tame Impala fame.

“He’s the guy whose name has popped up in liner notes in records I’ve listened to since I was 12,” Schneider says. “When I was growing up and buying records and watching movies and stuff, it was this impossible-to-define thing that you’re looking for in music or in art. It’s this insatiable search, which can be really rewarding at those moments where you do glimpse whatever that mysterious essence is.”

But Fridmann is a busy guy, recently mixing records for a variety of bands including MGMT, Spoon, Mogwai and Interpol, to name just a few, and when Schneider first asked, it looked like the timing wasn’t going to work out. Lord Huron moved along with the album regardless, recording at their studio, Whispering Pines, in L.A. and mixing with a different engineer. Then Fridmann called with sudden availability in his schedule, and Schneider dropped everything to fly out to New York.

“I think it was a great bit of luck,” he says. “I feel like I learned a lot from him, just in life lessons as well.”

But the project didn’t end there. Schneider says there was still so much of the backstory he had created that, naturally, couldn’t be squeezed into the format of a song. What’s left becomes the immersive experience that is Vide Noir, from the psychic hotline to a geocaching map to unlock tracks by “following the emerald star” and a “Products of the Universe” VHS tape for sale.

“It’s just ways to expand upon the story,” Schneider says, “but it’s up to the listener to decide if they want to do it.”

There’s no telling where the rabbit hole leads.