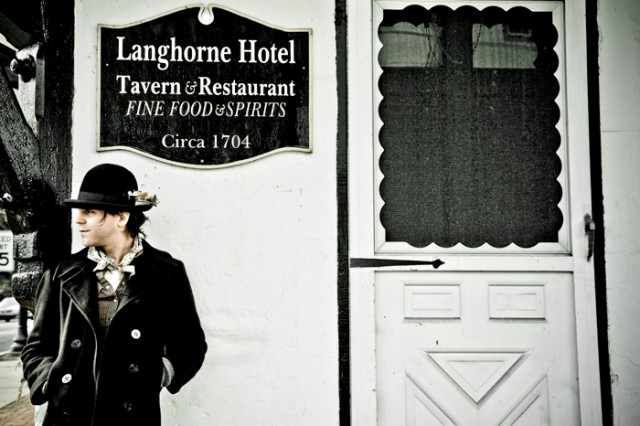 The nomadic roots rocker spent almost his entire adult life peddling his scuffling folk-blues odes to wastrels, scoundrels and lovelorn wanderers. In all that time since college, he’d managed to avoid ever paying rent.

Then, two years ago, at the age of 29, Slim (born Sean Scolnick) met a girl and put down roots in Portland, Ore. Let’s just say they didn’t take, and Slim’s back to the only real home he’s known the last decade: the road. Like a longtime convict, there’s something comforting in the familiarity of lockup. “I’ve been doing this traveling musician for all my adult life. You not only get used to it, but born for that kind of cage,” he concurs. “There’s a time and a place for stability, sitting still and enjoying things. I just haven’t found that exactly yet, and I don’t think that’s a bad thing. It’s just the case for some of us that we’re made to go from town to town, moving and shaking, as they say.”

That’s certainly been his way since his first national tour in 2003. He opened for Trachtenburg Family Slideshow Players after meeting Jason Trachtenburg at an open-mic night. The Family’s homey intimacy and ragtag charm matched Slim well, and he’s continued to build on it across four albums.

His delivery is artless, direct from the cuff of his heart to you. When not heartbroken or impassioned (sometimes one in the same), he has a smart ass’s gift for language, declaring that “the line’s been drawn, the land’s been led, but you can’t always eat what you’re fed,” on political paean “The Great Divide.” It’s off his new album, The Way We Move.

Written before the break-up, it’s strangely prescient at times, in the way you sometimes subconsciously hear the train coming long before it becomes necessary to abandon the vehicle on the tracks.

“When I listen back to [some tracks] I’m like, ‘Holy shit, we were still sleeping next to each other at the time,’” he says.

Just having anted up in a way he never had before, Slim felt the pain even more intensely.

“We broke up about a month before we got into the studio, and I was in a pretty raw emotional state,” he says. “Thank goodness I have this thing in my life. I can put all of that energy into making this record with my band as opposed to laying on a couch watching Jerry Springer and feeling sorry for myself. I think it comes across more in the emotion of the record than it does lyrically.”

If he was feeling down, he did have a band to uplift him, and the album’s its most band-like to date, according to Slim. The lineup changed with the addition of bassist Jeff Ratner just prior to recording 2009’s Be Set Free. At the time, he was more like a session hand than member of the band, but in the intervening years Ratner and the band have grown tighter and contributed more this time. Indeed, the new lineup’s prompted Slim to change his backing band’s name from the War Eagles to the Law.

While Slim lived in Portland, the band remained on the East Coast, and writing on tour’s difficult. They got around this with scheduled get-togethers and focused work sessions. But not only were the songs written in closer collaboration than ever before, they were recorded that way too, as the band trekked into the Catskills to work with producer Kenny Siegel (Wooden Wand, Graham Parker).

“We wanted to live together, eat together, and be around each other at all times, so for about three weeks or something like that were in this old historic house up by Kenny’s place,” Slim says. “This time it was much more of a family affair, and we’ve been with each other long enough to kind of know how to act with each other, know how to play with each other. I think it shows in the music.”

In fact, the album bubbles with a rollicking camaraderie, like locked-arm buddies with mugs raised to the ceiling amidst a lively front-porch hootenanny. It runs from the groovy organ-driven roots-soul “Two Crooked Hearts” to the lonely, banjo-driven ache of “Salvation” and the bustling handclap alt-country of “Bad Luck,” where he declares, “I was born with a thorn in my soul, sometimes it hurts / Bad luck got in me, but I will survive.”

The funny thing is that for all Slim’s peripatetic travels, his heart’s a homebody. This was only his second relationship in 10 years.

“I’m a unique breed, in that though I am built for a rambling lifestyle, not so much in the relationship way,” he says. “It’s my first time in kind of my adult life I’ve been single man. There’s perks to it, sure, but I enjoy having that partner in crime.”

Admittedly, survival is heartbreak’s consolation prize, but Slim’s not looking for pity, and he harbors no illusions. Nor will he blame his hard-touring life.

“Love is the most beautiful thing on this planet, but it’s a hard motherfucking thing to sustain, nurture, feed and make last. That’s true if you’re a touring musician, a doctor or a janitor,” Slim says. “It’s easy when it’s easy and it’s really, really hard when it’s hard. It definitely takes a certain kind of individual that would put up with [all the touring]. But you still have to learn the dance, and it’s a delicate ballet.”