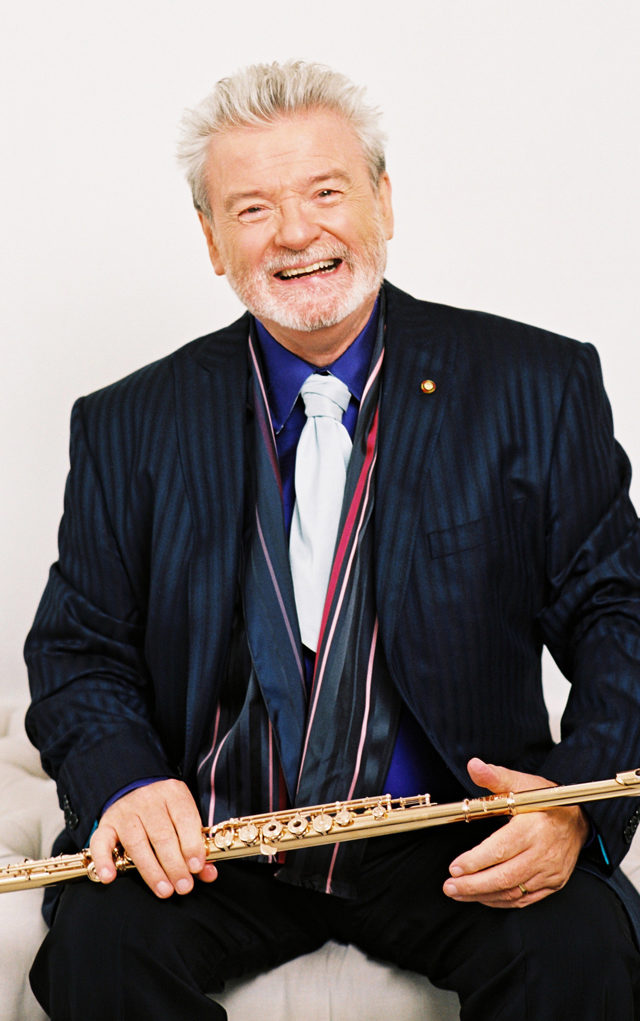 Courtesy of University of Colorado/Glenn Asakawa

There will be many kinds of flutes at the University of Colorado Boulder next week: Magic, golden, and from piccolo to bass.

The central event will be a two-day meeting of flutists at the College of Music, Tuesday and Wednesday, March 21–22. Under the title “Once a Flutist: Rekindling the flutist within,” this free event is open to flutists young and old.

The culminating events will be a masterclass for CU flute students with Sir James Galway —“The Man with the Golden Flute” — at 1:30 p.m. Tuesday in Grusin Music Hall, and a concert by Galway and his wife, Lady Jeanne Galway, Wednesday at 7:30 p.m. in Macky Auditorium.

Sir James Galway, who has recorded just about the entire classical flute repertoire, has performed with Stevie Wonder, Joni Mitchell and Sir Elton John, and recorded film music for The Lord of Rings, is one of the world’s best known musicians of any genre.

But before all of that gets underway, CU’s Eklund Opera Program will set the scene with Mozart’s Magic Flute, Friday, Saturday and Sunday, March 17–19, in Macky Auditorium.

Christina Jennings organized “Once a Flutist” to celebrate her 10th year teaching flute at CU.

“There are a lot of flute players out there,” she says. “I can’t tell you how many times [I’ve met] people who say, ‘I used to play the flute!’ Or ‘My daughter plays the flute!’

“The idea for this festival came from that.”

Thinking “once a flutist, always a flutist,” she decided to “rekindle the flutist within” for both current and former players. In addition to her own 18 students at CU, participants will include students as young as kindergarten, 30 CU alumni, members of the Colorado Flute Association, College of Music faculty and staff, and other flutists from around the country. With the list growing every day, “I don’t know how many people to expect,” Jennings says.

Jennings will play a recital March 21 for the College of Music “Faculty Tuesdays” series, at 7:30 p.m. in Grusin Hall. But she will not hog the stage: appearing with her will be a flute orchestra of no fewer than 60 players, all on the Grusin stage.

As part of the two-day event, there will be 40 “Little Galways,” young flutists in grades kindergarten through eighth who will have the chance to rehearse and perform with Galway himself. Unsurprisingly, that group filled up almost as soon as it was announced.

Another guest is literally an out-of-this-world flute player: astronaut Cady Coleman, who took her flutes onto the International Space Station. In 2011 she played live from orbit on National Public Radio.

Jennings says “Once a Flutist” is “bigger than anything I’ve ever done before. And of course, you can’t get any bigger than the Galways!”

Now well into his eighth decade, Galway shows no sign of slowing down. “That’s what I do,” he says. “That’s why I’m here: to play the flute.”

In addition to playing, he loves teaching and passing on what he knows. “I’m probably one of the most experienced flute players ever,” he says. To share his experience he has created “First Flute,” a set of video lessons for flutists from beginners on, he runs annual flute festivals, he presents masterclasses and academies, many of them with his wife.

“I’m absolutely convinced that everybody can do what I do,” he says. “The only difference between me and them is that I practice a tremendous amount and they don’t. I’m hoping to infuse the practice bug into people.”

If you have seen and heard Galway perform you may have noticed his remarkable tone quality, and the ease with which he plays. He never gets nervous, he says, because of the preparation he does. The tone he attributes to listening to great Italian singers.

“Do you know Franco Corelli?” he asks. “Do you know Bergonzi, Gigli and Caruso and all these characters? They all sang with the same sort of passion. Every note was full. There were no passing notes in a phrase.”

The Macky concert will feature both Galways with Cathal Breslin, a young Irish pianist who is accompanying the flutists on their current U.S. tour. The program will include a sonata by Philippe Gaubert, who Galway describes as “The Brahms of the flute.”

“And we’re playing a few little pieces which I’m well know for as encore pieces — we’re putting those in the middle of the program,” he says. “And Carnival of Venice, which everybody knows.”

Among the encores which are sure to follow every concert he gives, the “Little Galways” will get the chance to play one piece with the man known justifiably as “the living legend of the flute.”

The CU production of The Magic Flute will be directed by Herschel Garfein, a Grammy Award-winning librettist, a composer and a stage director. And if you know the rather fantastic plot of The Magic Flute, he wants you to know that he does not see the opera as a fairy tale.

“From the beginning, I’ve seen it as sort of a metaphysical comedy of manners,” Garfein says. “I think it can be taken both more seriously, and more comically, than usual. There’s a very compelling love story between Prince Tamino and Pamina, and there’s also a huge strain of philosophical thought that runs through the opera.”

The philosophical aspect comes from Mozart’s engagement with the Masonic movement and 18th-century Enlightenment thought. At the same time, there is a great deal of humor, which comes from the opera having been written for a popular theater, where audiences expected to be entertained.

“The Magic Flute was written in response to specific needs of a specific theater, in one specific season in Vienna,” he says. “The owner of the theater commissioned the piece to respond to trends that were popular at the time among the rival theaters.”

Among those trends were comic operas with elements of magic in the plots.

“The libretto is a bit of a hodgepodge, but somehow all of those contradictions work beautifully in the opera” Garfein says. “It is my job as director not to suppress them, but to make them more contradictory and still add up to the message that I think Mozart intended.”

Helping make the contradictions work is the stage design of Peter Dean Beck. “Our designer has gone for a much more abstract set design than one usually sees,” Garfein says. “It looks like the cosmos with the navel of the world at center stage and things radiating outward from that.”

In working with the student cast, Garfein wants to bring out the humanity of the characters. “It’s important that they see it as being a dramatization of very basic human interactions,” he says. “And I really wanted to use the youthfulness and the energy of this cast. So I’m using their youth and athleticism from the very first entrance of Tamino into the opera.

“And on from there it’s a very, very physical production.”

And does it tie into the next week’s celebration of the flute? Garfein seems to think so.

“The story (of the opera) is largely the story of Tamino earning the title of Prince,” he says. “He does this through the agency of a magic flute.”

The Magic Flute by W.A. Mozart

Once a Flutist: Rekindling
the flutist within!

All events free and open to the public, including: