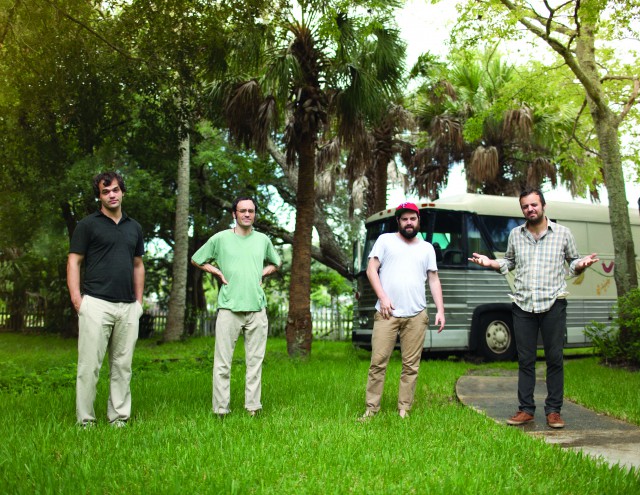 It’s hard not to become introspective when listening to
mewithoutYou’s albums. Vocalist Aaron Weiss puts layer upon layer of
philosophical, religious and spiritual overtones in his lyrics, and his
brother, guitarist Mike Weiss, says he still finds himself exploring those
lyrics daily.

“I just love to read along as I listen to the music and just
sort of absorb it on different levels,” Mike Weiss says.

mewithoutYou (spelled correctly), formed in Philadelphia in
2000 by the brothers Weiss, has served as a catalyst for a new genre of rock
music. Not quite post-hardcore, folky rock or experimental rock, mewithoutYou
skims the surface of many genres to produce something that rarely follows a
verse/chorus/verse format. Instead, vocalist Aaron Weiss takes listeners on a
journey of spoken-word narratives and vocally aggressive streams of consciousness,
the intensity of which is matched by booming drumbeats and Mike Weiss’ seemingly
improvisational chord progressions, starting as short picks on his guitar
before crescendo-ing into full riffs.

“We definitely do a lot of playing to see what comes out,”
Weiss says. “We actually intend very much to have set verses and choruses when
we start to write the instrumental version of the songs, but a lot of times
Aaron just doesn’t gravitate towards that B section being a chorus, lyrically.”

Adding to their unconventional approach to creating songs
has been mewithoutYou’s ability to explore existential themes and contemplative
thought in each of their five albums. In the song “Messes of Men,” Weiss
questions his own existence with powerful imagery: “‘I do not exist,’ we
faithfully insist / Sailing in our separate ships and from each tiny caravel /
Tiring of trying, there’s a necessary dying, / Like the horseshoe crab in its
proper season sheds its shell.”

Religious references to Judaism, Christianity, and Islam and
their impact on Aaron Weiss’ own spirituality abound in almost every one of their
songs. Because of this, the band has developed a point of contention for those
who label them a “Christian band.”

“I’d say ‘irked’ is a good word to describe how it makes me
feel,” Weiss says. “It’s not an extreme thing, I don’t lose any sleep over it.
Ultimately, the kids that may have been seen as just liking us because they
thought we were just this Christian band have to have at least been challenged
by the fact that we have a song called ‘Allah, Allah, Allah.’ I think what has
been more and more in my heart, the things that have been becoming more
apparent to me, is when talking about religions like Christianity or Islam, I
think they should be looked at as two faiths that are less of a group and more
of a path.”

Part of the perception some have of them being simply a
Christian band may stem from the fact that mewithoutYou was, until 2011, under
a contract with Tooth and Nail records, a predominately Christian label that
has signed bands including Norma Jean, P.O.D. and Underoath.

“I think people are gonna realize that we’re not just trying
to be a part of this group,” Weiss says. “If you’re trying to market an album,
it looks like a pretty good demographic to sell to. And that’s a lot of what
Tooth and Nail is all about in certain bands that they have; they definitely
see a group of Christian people that they could sell a product to very easily.
And that’s not what we want to have anything to do with, personally. We all
used to go to hardcore shows and punk rock shows, and we just don’t come from that
Christian band niche background. I think people are gonna be more and more
inclined to just decide whether they like our music based on the music itself.
Maybe early on when we first signed our deal we might have been a little naive
as to what we were cultivating for ourselves by signing Tooth and Nail, but
it’s all good.”

Weiss adds that the band has no ill will towards Tooth and
Nail, and that producing albums independently has been an exciting endeavor.

With their new record, Ten
Stories, Aaron Weiss tells the story of a derailed circus train in Michigan
and the animals who escape. The album starts off with “February, 1878”—the date
Weiss has chosen for his fictional, modern day fairytale of talking animals in
a blistering winter—and features subplots including the “Elephant in the Dock”
and “The Foxes Dream of the Log Flume.”

Mike Weiss takes a moment to reflect on his brother’s lyrics
in Ten Stories.

“I think Aaron is very deliberately
using this album as a way to be a narrator of different characters that
represent many different ways to think about those big questions,” he says.
“Questions like the existence of God, who we are as an individual, and what
meaning we draw from our lives beyond the sort of normal, every day, mundane,
meaningless conclusions. I see this album kind of branching off a little bit
more into a new area where Aaron is sort of trying to remove himself as much as
he can in his own personal musings or own personal conclusions and he’s more
trying to just express the various philosophers that he’s read or taking from
experiences that he’s had at different churches or synagogues or mosques and
expressed those ideas through characters like the elephant, tiger, rabbit, fox
or bear.”

Weiss says that the themes his brother brings into their
songs are simply a reflection of him as an individual, not the band as a
whole.

“I think you’re gonna find that every individual has enough
of their own uniqueness in their spirituality that I don’t believe in any band
that claims to be that unified. We
certainly aren’t. So that’s kind of where we are as a band: we all have our own
beliefs. When it comes down to the details and meat and potatoes of it all, we
definitely are just like a group of friends that way. We all sort of encourage
Aaron to just write what he knows and what he wants to write about.”

mewithoutYou plays at the Marquis in Denver Thursday, July 19, at 8
p.m.