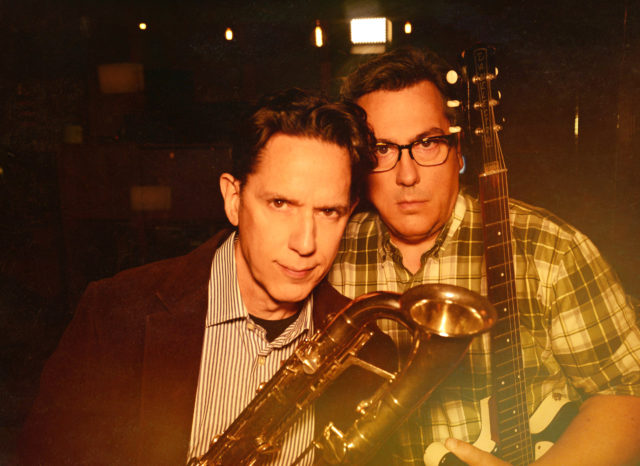 John Linnell of They Might Be Giants says one of the group’s key goals has always been to not repeat themselves and bring something new to virtually every song he and his partner in the band, John Flansburgh, write and record.

But he admits that 35-plus years into the group’s career, it gets harder and harder to meet that goal.

“I mean, it’s easier said than done, obviously,” Linnell says over the phone. “It’s a big challenge. But we take it seriously. We’re not just blowing smoke. I think we feel like in a way that is the job, say something new. We’ve already written all these songs. There’s absolutely no call to write the same songs over again. One of the reasons it gets harder and harder is we’ve written so many songs. And then the other reason is it’s always been hard and we’re getting older, so we maybe have to work harder to reach the same goal. … I’m not making any claims about whether or not we’re successful. But that is something we do take seriously and we feel that’s our job, to try to come up with a new thing to say, a new idea.”

The challenge to stay fresh musically isn’t stopping the two Johns in their quest to create new material. In fact, they’re relaunching their signature Dial-A-Song programming — posting a new song and music video on their webpage each week as part of a weekly radio show segment that is broadcast around the country.

Linnell says he and Flansburgh have a stack of songs ready to keep Dial-A-Song up and running for a good part of 2018.

“We don’t have enough (songs) yet to fill the whole year,” Linnell says. “But the idea is we’re going to keep feeding the pile and keep the quality as high as possible.”

Chances are Linnell and Flansburgh will succeed just fine in meeting the weekly song demands of Dial-A-Song. Over their history in They Might Be Giants, they have been one of the more prolific acts going.

I Like Fun marks the 20th studio album (including several children’s albums) since Linnell and Flansburgh started They Might Be Giants as a duo in 1982. They brought on additional band members in 1992. Guitarist Dan Miller and bassist Danny Weinkauf have been on board since 1998, while drummer Marty Beller joined in 2004.

Along with the albums, Linnell and Flansburgh have contributed many songs to television, film and other projects, while a good number of other songs have been used only on Dial-A-Song, which debuted in 1985, ran until 2008, was reactivated in 2015 and early 2016 before shutting down again, and is being re-launched to coincide with the new album.

They Might Be Giants enjoyed a few brushes with mainstream success in their first decade. “Birdhouse in Your Soul,” from the group’s platinum-certified third album, 1989’s Flood, was a top-five modern rock hit, while “Ana Ng,” “Twisting” and “The Statue Got Me High” also charted in the modern rock top 25. More recently, the group has found considerable success with its children’s albums, beginning with the 2004 release No!. Three of the children’s albums have gone gold.

The group’s music has been distinctive from the start — a catchy and at times quirky brand of wide-ranging pop accompanied by clever and sometimes brainy lyrics. That general blueprint remains intact on I Like Fun, an excellent effort that evokes both the early and more recent They Might Be Giants sound.

“McCafferty’s Bib,” “The Greatest” and “I Like Fun” — three of the album’s quirkier tunes — found Linnell and Flansburgh returning to their early mode of recording, where songs were mainly studio creations using a variety of interesting instruments and sonics. On other songs, such as the bouncy piano-driven “I Left My Body,” the ultra-hooky surfy rocker “An Insult to the Fact Checkers” and the punchy power pop-ish “All Time What,” the approach is more in line with the post-1992 full band-oriented albums, which gives these songs a more muscular sound that is entirely suitable for these tunes.

Linnell feels he, Flansburgh and the other band members — met the goal of not repeating themselves musically on I Like Fun.

“I would say most of the songs on the album are, they don’t to me sound like retreads of stuff we’ve already done,” Linnell says.

For the tour in support of the new album, the five members of They Might Be Giants will be joined by trumpeter/multi-instrumentalist Curt Ramm. The show will feature fan favorites, some deep tracks that haven’t been played much on earlier tours and a healthy selection of songs from I Like Fun. Linnell knows emphasizing the new material is a bit of a risk, but he hopes the show will please hardcore and casual fans alike.

“It’s a challenge for people to go see their favorite band and be subjected to a whole bunch of new material that maybe they’re not that into,” he says. “So we have to make the case, basically. We’re trying to make the argument that the new stuff is good.”