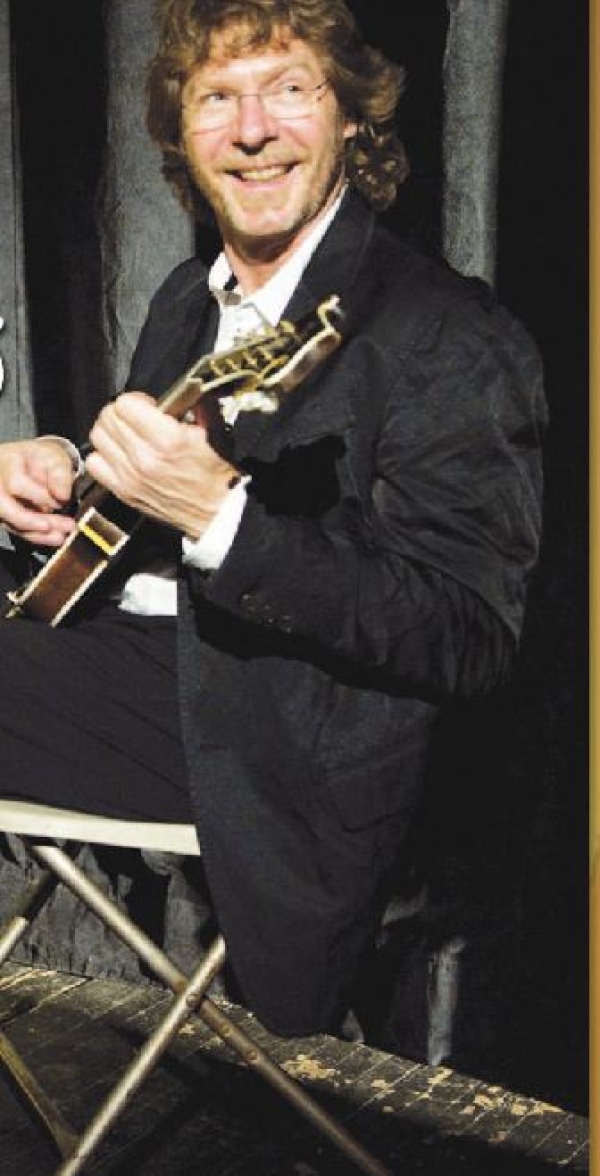 When you look at it, it’s called a ‘bluegrass festival,’ but it’s a wide-open music festival,” says mandolin great Sam Bush. “I’ve seen everything from Little Feat to Paco de Lucia to Johnny Cash, Willie Nelson to Bill Monroe to Ralph Stanley. Just last year they had David Byrne — he had his normal Talking Heads-style band, the Dancers. Elvis Costello played there with somewhat of an acoustic band of musicians who have played the festival many times. I believe the variety has really kept the festival going.”

While he likes to play down his longtime nickname, the “King of Telluride Bluegrass” (“I ain’t the king of anything. But I sure am glad I get to go”), Bush sits at the heart of the annual Telluride Bluegrass Festival, as he has since 1975, when he first played there with his then-band, New Grass Revival. Bush is celebrating his 36th consecutive year on the stage, this time playing with The Sam Bush Band.

“He’s always been the guy — the sort of spark plug behind the thing,” guitar legend Tim O’Brien says about Bush and why they banteringly call him the king. “All through the history of the festival, he’s been on the stage the most of anybody with different bands. It didn’t matter who it was, he’d be on the stage with them. They’ll have Emmylou Harris or Willie Nelson or James Taylor or whoever, but a lot of the fans are there because of Sam and because of what he represents, which is that fusion of all those elements — the pop stuff, the rock stuff, the bluegrass and the blues.”

Founded in 1971, Bush’s band New Grass Revival became really the first long-standing progressive bluegrass band that played traditional instruments: the banjo, fiddle, guitar, bass and mandolin. However, with what might be considered
unorthodox compositions, the band pushed the limits of the genre with
extended jamming, which challenged the patience of old timers and
bluegrass purists in the regular festival circuit.

“When we first came there
in 1975,” says Bush, “Newgrass Revival was the first band ever booked
that wasn’t from the state of Colorado. The original festival promoters
were in a band called the Fall Creek Band. They had seen our band play
in Winfield, Kan., the year before, and they knew they wanted to get us
for Telluride.”

Much
like pioneers of the jamgrass movement who have been shunned by purists
today, New Grass Revival was a hard sell for traditionalists. That is,
until they came to Telluride.

“This festival has never been a purist festival,” Bush
says. “People were open for any kind of music. You were never judged
musically or personally. That’s why New Grass Revival went over so well
the very first time they came. When we first played on that stage, we
realized that we had met a group of people that understood our music —
we’d finally met the right audience, and we just wondered at their
willingness to accept any kind of music. And it’s the way it always is,
and that’s why I still wanna be there.”

Peter Rowan still wants to be there, too, and
in a big way he’s one of the last links to the first generation of
bluegrass innovators: Rowan cut his teeth playing guitar for Bill Monroe
between 1965 and 1967, later teaming up with Jerry Garcia and Vassar
Clements in the early 1970s for a run with Old and In the Way. As such,
the 67-year-old Rowan built a solid foundation in the old generation of
traditional, structured bluegrass. But it wasn’t long before he found
his way in the next generation of 1970s progressives who brought drums
and jamming to the genre, and it all started at Telluride. His first
performance there was in 1976, and after having been through Old and In
the Way, another band called Seatrain, and a stint with his family band,
The Rowan Brothers, he was wide open for new musical direction.

“Telluride has always been
the one festival that will kind of make it possible both artistically
and support-wise to put something together that’s a little more than a
standard show — to stretch out a bit,” says Rowan. “For me that’s where
it all started. When you walk away from it all, Telluride’s a great
place to land. A lot of people reinvent their world view in Telluride.”

Bluegrass itself is a
genre of constant reinvention, and Telluride has always been the
festival where that experimentation is not only welcome, but expected.
And while this year’s lineup features plenty of traditional bluegrass,
studded across the roster are jamgrass innovators like Leftover Salmon
and Yonder Mountain String Band, with their jazz improvisational
approach — a natural progression of the 1970s generation. As Tim O’Brien
says, with bluegrass “the sky’s the limit.”

“There’s a real excitement to it,” says
O’Brien, who just came off the Mark Knopfler tour. “There’s a lot of hot
lick playing and fast paces and driving grooves. It’s like you’re
playing rock ’n’ roll, but you’re just playing it with a mandolin, like
Bill Monroe did. Buddy Holly and Carl Perkins were really into Bill
Monroe. Elvis Presley was really into him. And musically, if you listen
to his mandolin playing and Chuck Berry’s guitar playing, it’s a similar
thing — they’re playing the blues, and synthesizing the same stuff, but
technology makes it sound different.”

In regards to the next generation of bluegrass,
O’Brien continues, “The Colorado thing has taken some surprising turns
with the the jam band scene: Leftover Salmon, String Cheese, Yonder
Mountain. That’s been really good. The Punch Brothers have taken it in
the classical direction; instead of doing 12 songs, they’ll do one
40-minute piece with different suites. It’s possible to do all kinds of
things with bluegrass.”

According to O’Brien, “between 1975 and now, I’ve only missed two
years.” And as usual, he’s wearing two hats at this year’s event,
jamming both with his current incarnation as the Tim O’Brien Band as
well as in a reunion performance with nationally renowned 1980s
bluegrass greats Hot Rize, who will be playing the venue immediately
after performing at Bonnaroo.

“It’s a great thing to get together again with these
guys,” he says. “We kinda went to school together and, you know, if you
travel in a car or a bus with a group of guys for enough time, you
become a little family, and you have your own little language, too.
Kinda like The Beatles. They were always The Beatles against the world.
You’re like your own little army platoon. It was an awful lot of fun.
And we did it fulltime for 12 years, and we can’t really avoid the
reunions because it’s a part of who all of us are.”

And along with experimental
progress, reunions have always been a major part of the Telluride
experience. For Bush, besides playing with his own band, he will also be
playing in the Telluride House Band, but not before jumping into his
former shoes for an on-stage reunion with Jerry Douglas and Peter Rowan
in the latter’s important group, Crucial Country.

“We jam here and there over
the years,” Rowan says, “but everybody’s been locked in on their
careers. Jerry’s been [playing] with Alison Krauss, and Sam’s been doing
his thing. We all have our own things and that’s always been the case.
So having these guys behind me on the stage is very special.”

Rowan, Bush and O’Brien
have played the festival thirty-something times (decades are milestones
for performers, and for Rowan, it’s his 30th), and the event obviously
has unique significance for the artists. Meanwhile, a lot has changed
with both the town and the event, which have grown up handin-hand. Long
past are the days when this once-tiny mining community consisted of one
hotel, a gravel Main Street and, as Bush says, “just outlaws and
trust-funders.”

“The
audience and the musicians were all staying in the campground,” O’Brien
says of his first performance, also in 1975. “Telluride was just kinda
coming alive. It was a hippie thing, and it was quite a spectacle, even
though there was only maybe a thousand people there. There was so much
good will, it was contagious. But I’ve always thought that there’s a
certain process that Telluride has: you drive a ways to a beautiful
place to have a good time. Maybe it’s your first time or maybe you’re
returning. By the time you get there, you’re kind of affected by all of
that — by the journey, by the scenery — and everybody’s pointed in the
same direction. It’s like a power place or something.”

You wouldn’t believe how many people work on this festival and
what they do. Thank Planet Bluegrass for keeping this festival going.
It’s an impossible task, and a very thankless one at that. I’m thrilled
to be back. It’s its own reward, getting to be there. Every time we get
there, when we’re first driving into town, it’s a feeling that I can’t
describe — I wish everyone in America could go into that little box
canyon and see what it looks like. You get the beauty of the mountains,
and you get the beauty of an audience that appreciates everything. It’s
just wonderful to get to play music there.”