Justin Townes Earle is far away from home. On the second week of his tour, he’s in Fall River, Massachusetts — exactly 3,091 miles away from Portland, Oregon, where his wife is at home, exactly 30 weeks pregnant.

He wishes he could be there with her but knows he has a job to do on the road, and with a baby on the way, he has a newfound sense of purpose in providing for his family. He talks about it matter-of-factly, as if his relentless touring has always been a labor of love and not the restless wanderings of a boy on the run from his past.

His calm isn’t a masquerade, but a sign of growing into a man who no longer measures life by what it lacks, valuing it for what it contains instead. For most of his life, Earle’s focus has been on the absence of his own father, musician Steve Earle, who left him and his mother, Carol-Ann Hunter, to fend for themselves in Nashville, Tennessee, when Justin was just 2 years old. It was his lack of a relationship with his father that would drive his angst and the music it inspired, including his aptly named 2014 and 2015 albums, Single Mothers and Absent Fathers.

As an artist trying to make sense of his own life, Earle found himself grappling with his negative space, tormented by the distance between him and the elder Earle. No matter how hard the younger fought to shake his dad’s legacy, it remained, as if his genius only existed insofar as it related to his father’s. He came to wear his father’s name like a ball and chain.

“A lot of times who you end up despising is the one that’s not there, the one who never bothered,” Earle says. “When I was young, I didn’t know anything about my dad. He was like this mythic figure that became larger than life. For years I would kind of lie about it, because I didn’t want to be the fatherless kid, like it was no big deal. But it ended up defining me, unfortunately for my mom, who stuck around and was left to deal with me, screaming and yelling like the indignant teenager I was.”

His mom still lives in Nashville where she works at the front desk of a local middle and high school. The two remain close and Earle goes to visit her twice a year, despite his growing indignation about the gentrification he sees swallowing up his musically rich hometown. And, as it turns out, he didn’t learn about life as a musician from his father but from his mom who worked setting up musical stages for big amphitheaters and small clubs alike.

Earle says it’s important to understand what he does from his mom’s side of the business.

“After all, I grew up with roadies, not musicians,” he says.

Being in his mom’s world taught him how to put together a stage long before he ever thought about performing on one. 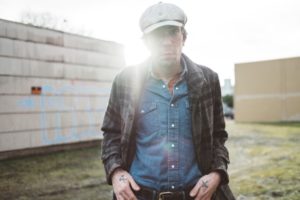 But her work also gave him a glimpse into the position he would come to hold at center stage with a guitar over his shoulder. He remembers the times his mom would bring him to shows and let him climb up into the scaffolding so he could watch the musicians play. Still to this day, he doesn’t really see himself as the guy in the spotlight, but as a member of the merry crew of outcasts pulling strings from behind the curtains.

His forthcoming album, Kids These Days, is an exemplar of music made from both sides of the stage in mind. To make the record, Earle teamed up with behind-the-scenes master Mike Mogis, producer of Jenny Lewis’s Rabbit Fur Coat and M. Ward’s Hold Time. Hearing these albums, Earle became enamored with the way Mogis’ artful post-production elevated the warm acoustics of the guitar and the rawness of the vocals.

To capture that authentic quality on his own album, Mogis asked Earle to do something he’d never done before — to give up creative control. Earle said OK, but then went about doing what he always does, insisting on laying down live guitar, voice and bass. Eventually, he handed over the songs and “gave [Mogis] alone time with the music,” and even though it made him nervous, the gesture taught Earle a crowning lesson about “how to let art breathe.”

The result is an airy album stripped of the youthful arrogance that characterized Earle’s earlier work, as if when he handed off the songs he also took the chip off his shoulder. Where once his music sought to pick a fight, now it seeks to reunite, inspired by Earle’s newfound recognition of the weirdness inside each and every one of us. Somewhere along the line, Earle realized he wasn’t as much of an outcast as he thought — everyone else was just as screwed up as him. With that thought, he broke the chains that tethered him to his father in order to be his own man.

As if to prove the profundity of his shift in perspective, he starts to talk fondly about something his father used to say: “You know, my dad taught me how to write like him. Over and over he hammered it into me, even when he wasn’t around. He told me not to go outside myself, to know my limitations, to know who I and more importantly what I am. It’s necessary if you are going to express something that rings true to people.

“And I can add one more thing to that list: you are what you are confused about and that is why life is what it is. I’m not talking about sensual confusion here, but absolute, existential confusion — confusion about why life is the way it is.”

There is a lot of unknown in the world and that can be scary. When we are young, we imagine monsters under the bed. As we get older, the once imaginary villains become real people who have let us down. Forgiveness doesn’t come when we let go of those old harms and replace evil with good. Rather, as Earle has come to demonstrate, forgiveness comes when we come to understand old transgressions in a new way and from a new point of view. Maybe it’s that we come to see some of the evil in the world inside ourselves and the difference between our negative and positive spaces just doesn’t seem to matter as much anymore.

“Everything is easier than it ever was before because I no longer feel like I’m setting the tone for my future by looking back,” he says. “Instead, at this point in my life, I’ve come to know that I definitely don’t know what I’m doing, like when this child comes, who knows? All I know is that I am excited instead of freaked like I would have been at 30.

“I’m not saying life is all about some sunny, bright future, it’s still gonna be tough. Actually, I bet it gets harder, because now I have to pay attention.”