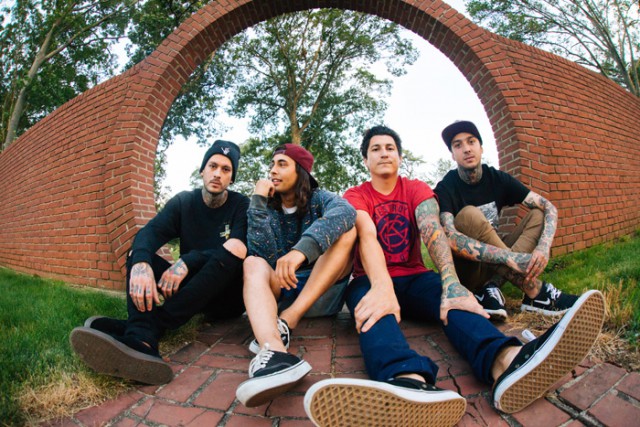 As Pierce The Veil gears up for the release of its fourth album, some are predicting big things for the band, which has enjoyed steady and substantial growth in its popularity.

The band’s third album, 2012’s Collide with the Sky, debuted at number 12 on Billboard Magazine’s all-genre Top 200 album chart — an impressive achievement at a time when hard rock bands have struggled to sell albums and reach the high end of the charts.

Coupled with the considerable praise Pierce The Veil has received for its ability to craft songs that combine the fierceness of hardcore and metal with the songcraft and melodicism of pop, this has some predicting that the fourth album could bust the band into the mainstream and major popularity.

Pierce The Veil bassist Jaime Preciado says the group knows there are expectations, but has done its best to focus on a more fundamental goal.

“I know a lot of people are saying, ‘How are you planning on topping the last album you guys did?’ That question always gets brought up,” Preciado said during a mid-October phone interview. “And for us, it’s never been about topping anything. It’s about writing and getting better individually and also in a group. You want to become a better songwriter, a better singer, a better musician, a better everything.”

The goal of being the best band it can be translates to virtually every facet of what Pierce The Veil does.

For instance, as Preciado explained, on its fall tour, Pierce The Veil will continue its tradition of trying to give fans the biggest and best shows its finances and imaginations allow.

“We try to make the show as big as possible,” he said. “We also like to push ourselves, whether it’s with production, with lights, with stage production set-ups.”

The fall tour, a co-headlining run with Sleeping With Sirens, will precede the planned early 2015 release of the group’s fourth studio album.

Preciado said the group might get the first single from the album released in time to add that song to its set this fall, but may wait until the next album is out before adding other new material to the set. Whatever songs Pierce The Veil plays on a given night, he said one thing will be consistent.

“It will be a good time, as they say,” Preciado said. The return to touring comes after Pierce The Veil spent most of this year working on the next album — all in an effort to make the best album possible at this point in its career.

“We definitely take our time. We’re not the fastest writers on Earth, and we definitely take advantage of it,” Preciado said. “I know sometimes people get a little impatient with us, but it seemed to work out OK. So we’re going to keep doing that. We don’t try to rush anything.”

The luxury of time is something the group didn’t have the first time the current four-man lineup did an album. Pierce The Veil actually started out as a duo of brothers, Vic Fuentes (vocals/guitar) and Mike Fuentes (drums), and they recorded the 2007 debut album, A Flair for the Dramatic, themselves.

Then Preciado and lead guitarist Tony Perry came aboard to complete the lineup and tour behind the debut. When it was time to get to work on a second album, the band found itself in a time crunch. Only about half of the songs were written when the band arrived at the studio.

Things went down to the wire, and the group rushed to finish the instrumental tracks for the songs over the final few days before its studio time was up. Pierce The Veil was literally taking its gear out of the studio while the band that had the studio next loaded in its equipment.

The vocals for that 2010 album, Selfish Machines, had to get done at a home studio afterward, completing the now overdue album.

Things were far more orderly with the as-yet-untitled fourth album. To begin the process, the band set up shop early this year in its home base of San Diego to begin working through song ideas.

The group then relocated to a cabin at California’s Big Bear Lake for further work on the songs. At least that was the plan.

“We were up in Big Bear for a while and actually ended up moving back to San Diego because we were getting noise complaints,” Preciado said. “So that really didn’t last too long. But we brought it back. We have a studio here in San Diego where we rehearse and stuff. We were just hashing out ideas for a couple of months.”

Finally, as summer headed toward fall, Pierce The Veil headed to Long Island, where producer Dan Korneff (who also co-produced Collide with the Sky) had built a new studio. Over the next three months, the group did pre-production and completed recording of the fourth album.

The preproduction session, in particular, gave the group time to try out multiple approaches to songs and land on a version of each song that the four band members and Korneff agreed was the best.

The group, obviously, put considerable effort into the new album. But Preciado — just as he didn’t want to make any predictions of impending stardom for Pierce The Veil — didn’t promise anything about the fourth album other than confirming that he and his bandmates gave it their best shot.