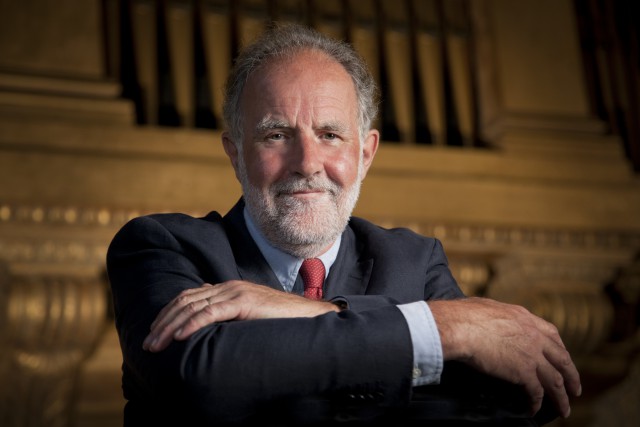 William Boughton does not believe the concert hall should be a cathedral of high art.

The first of three candidates for music director of the Colorado Music Festival to conduct at Chautauqua this summer, Boughton will lead two programs, with the chamber orchestra July 6 and the full orchestra July 10-11 (7:30 p.m. in the Chautauqua Auditorium; tickets https://tickets.chautauqua.com/Online/default.asp). And he is clear that he aspires to be no high priest at the altar of great music.

“Concerts are supposed to be enjoyable things,” he says. “Music and religion are both foreboding places. That’s our big downfall. We’ve erected these wonderful buildings, but a lot of people find them very intimidating.”

Not that he shies away from great music, but he aims to leaven his concerts with lighter pieces as well.

“I try not to do programs that are heavy in content throughout,” he says. “Otherwise one goes away soaking wet and exhausted.”

Boughton builds his programs by finding pieces that fit an overarching theme, and then taking the audience on a journey through the music — “like a chef does creating a four- or five-course meal,” he says.

For his visit to the CMF, Boughton proposed three programs for each orchestra, and the CMF selected one from each set of three. For the July 6 concert, the program features the Suite on English Tunes “A time there was” by Benjamin Britten; the “Humoresque” for violin and orchestra by Jean Sibelius, with Joseph Meyer, CMF associate concertmaster, as soloist; and the “Mother Goose Suite” by Maurice Ravel.

That theme is pretty clear with Ravel’s “Mother Goose Suite.” Based on Perrault’s familiar collection of old French children’s stories, it includes movements titled “The Pavanne of Sleeping Beauty” and “Conversation of Beauty and the Beast.” Britten’s suite is taken mostly from authentic old English folk songs that were collected for a volume published by John Playford in 1650.

On the other hand, “Sibelius doesn’t fit into folk songs,” Boughton admits. But he adds, “it’s wistful, it’s humorous, it’s light-hearted, so there’s that overarching theme of folk song-like lightness to the whole program.”

Then he quickly qualifies the characterization of the whole program: “The last of the Britten songs has a kind of profundity to it. It was his last orchestral work. It was written two years before he died, and the work is imbued with a kind of longing and a recognition that he was going to be dying.”

The full orchestra program on July 10 and 11 is more serious overall. The major works are Sibelius’ Violin Concerto, with the violinist Chad Hoopes already making a return to CMF at the age of 19; and Edward Elgar’s Enigma Variations.

Not wanting to leave us all “soaking wet and exhausted,” however, Boughton has included some lighter works. Calling the program “Dancing with Friends,” he chose a Brahms Hungarian Dance, the Waltz from Tchaikovsky’s Sleeping Beauty and ballet music from Gounod’s Faust to fill out the evening.

The program is geographically diverse, with composers from Finland, England, France, Germany and Russia. This is interesting, because there has been a tendency for record labels and broadcasters to pigeonhole Boughton as a specialist in the music of his native country.

When he started his career, he says, “there were very, very few recordings of English music. [It] was a niche market, and that’s what I’ve been kind of branded because of the recordings. But my tastes are extremely catholic, and my love of Mozart, Beethoven, Brahms, Tchaikovsky, is as great as my love of English music.”

“It has been a fantastic journey for me to learn about American music,” he says.

“That has broadened my repertoire. Music directors are not curators of museum pieces. It’s a living art form. And if we don’t foster composers and young artists, then there is no future. They are the life blood of our art form.”

Looking forward to his appearance at CMF, Boughton is especially happy about the Chautauqua Auditorium and the fact that it is not one of those highart cathedrals.

“It’s not your typical concert hall,” he says. “There is no backstage, and it breaks down all sorts of barriers. We’re all there for one purpose: the experience of great music, whatever the genre is.”

For more of Peter Alexander’s conversation with William Boughton, visit his blog at http://sharpsandflatirons.com