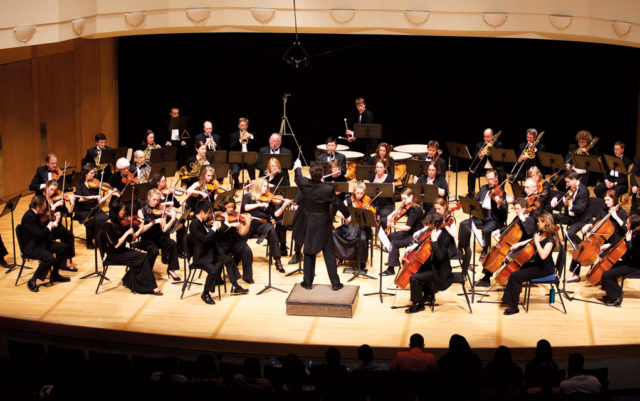 Devin Patrick Hughes wants to be a doorman for classical music.

The conductor of the Boulder Symphony has a mission to break down barriers that might keep people from coming to symphony concerts. “We believe that classical music speaks to everybody,” he says for both himself and the orchestra.

“You need a doorman, somebody standing there showing you in, welcoming you into an environment that’s comfortable,” he says. “We feature local composers and performers as much as possible. I think those things help show people the door in.”

That mission is evident in the Boulder Symphony’s next concert, “Day of Reckoning,” to be performed Saturday, April 8. The soloist will be Cody Garrison, a local pianist who will be making his first concerto appearance with an orchestra. There will be the world premiere of As Lightening Flashes by Elizabeth Anne Comninellis, a recent University of Colorado Boulder graduate. And her score includes a solo for concertmaster Yin-Feng Keynes Chen, another CU graduate who lives in the Boulder area.

Hughes has chosen a particularly accessible program for classical newbies: Berlioz’s Romantic fever-dream, Symphonie Fantastique, which he says “has everything;” Liszt’s fiery Todtentanz (Dance of Death) for piano and orchestra; and Comninellis’s new work, which Hughes expects to be “a big smash with our audience.”

The Boulder Symphony has put their outreach mission into action in various ways. They use a mascot based on Mozart to show people that composers are just like you and me. They offer introductory lectures at 6:15 p.m. before most concerts, including Saturday; music lessons and school visits by orchestra members; and an apprenticeship program for high school students. Tickets are free to all students K-12 and college students with a valid ID.

It all seems to work. “When we do surveys, we get a lot of people who don’t normally go to classical music concerts, who are trying it out for the first time,” Hughes says. He likes to tell about a man who heard the orchestra during a fundraiser in Macy’s, playing the Star Wars main theme.

“He couldn’t get it out of his mind for months,” Hughes explains. “He made a resolution to start going to more performances. And then he noticed that there is a rich plethora of [classical music] offerings right under his nose, and he didn’t know that.”

Turning to Saturday’s concert, Hughes says the Berlioz “is the epitome of a great symphony that is so much more than a symphony.” The story behind the piece is one anyone can understand, he says: a young man who becomes infatuated with an actress he sees on stage. And so he writes a crazy piece to get her attention, where she is represented by a theme that is heard in every movement.

It sounds very romantic, but the denouement — where he imagines that he murders her, is executed and meets her in a hellish afterlife — was pretty terrifying to the actress.

“He was insane,” Hughes says. “It’s like the musical version of stalking.

“But with this program, people can really appreciate what Berlioz was thinking and what he was intending to do with this symphony.”

Like the demonic final movement of the symphony, Liszt’s Todtentanz uses the “Dies irae” theme, a chant from the Roman Catholic Mass for the Dead that conjures visions of the final judgment. The text of the chant, translated “Day of wrath,” describes the day of judgment when “the doomed can no more flee from the fires of misery.”

Liszt weaves the gloomy chant melody into a Romantic fabric with a virtuoso piano part. “It’s an amazing piece,” Hughes says. “And we have an incredible piano soloist, Cody Garrison, who has been our opera accompanist. Many of these collaborative pianists are just the best musicians in the world!”

An affiliate faculty member and staff accompanist at Metropolitan State University, Garrison has accompanied opera rehearsals for Opera Colorado and singers around the country as well as Boulder Symphony. But with all of that experience, “this is the first time he will be soloing with orchestra,” Hughes says. “He’s incredibly excited!”

Currently a doctoral student at the University of Texas, Comninellis holds a master’s in composition from CU Boulder. “One of the members of the orchestra recommended her,” Hughes says. “She’s a really talented composer.

“I love it that I can’t find a composer to compare her to. There’s a little bit of Respighi in it. It’s a really beautiful piece, and she has a very unique voice. I think it will be a wonderful contrast to the Liszt and the Berlioz.”

The concert will be “just an incredible experience, especially for people that think classical music is hoity-toity,” Hughes says.

And if it’s your first visit to the symphony, he’s ready to hold the door for you.