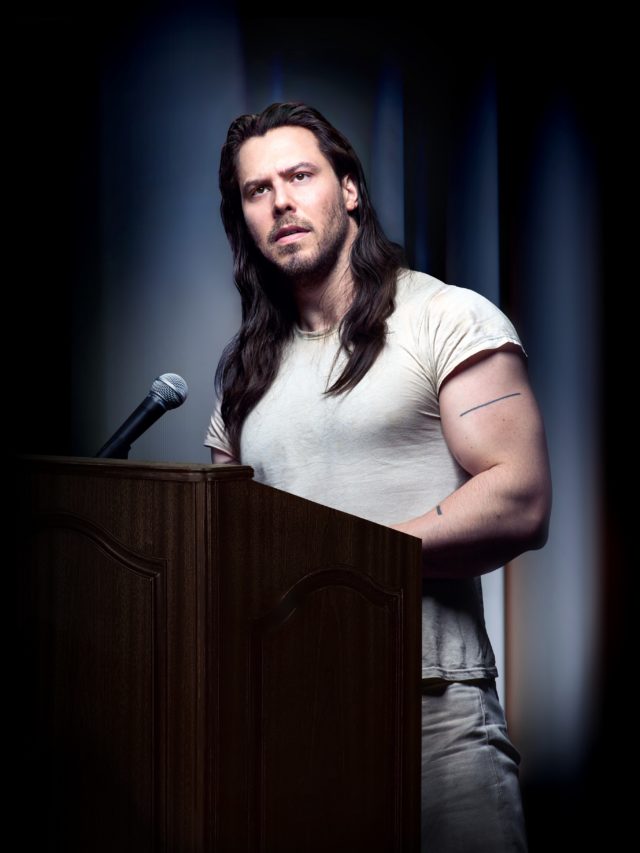 If you had access to MTV in the early 2000s, you likely witnessed the era of high-energy, raucous young men who lived by a doctrine of partying, chaos and unruly behavior — guys who donned dirty sneakers and basement tattoos and put their charismatic non-conformism on display so that the rest of us nine-to-fivers could remember what freedom looked like.

So while men like Johnny Knoxville and Bam Margera where launching themselves out of catapults, skiing in speedos and doing port-a-potty bike smashes, Andrew W.K. was scoring the soundtrack to their lives.

He did so with songs like “Party Hard,” “It’s Time To Party” and “Party ’Til You Puke.” He gained notoriety for his anthemic stadium-rock guitar tracks and assertive, unabashedly masculine vocals. But unlike those other high-energy party boys, Andrew’s life took a rather unexpected turn. In 2005, he began his career as a motivational speaker, accepting invitations to talk at institutions like Yale and Carnegie Mellon. In 2014, he was asked by the Village Voice to contribute to a weekly advice column, which he maintained until last December, and last week, he announced that he will supply a new weekly advice column for Vice. Currently, he’s traveling around the country with a 50 state speaking tour, The Power of Partying, which includes an appearance at Englewood’s Gothic Theatre on Oct. 11.

Andrew spoke to Boulder Weekly from the road while touring, and gave us a glimpse of his motivational speaking over the phone.

A: For better or worse it’s not evolved at all. Since I discovered partying, my evolution stopped and I only began to improve my ability to reach this destination. My goal has been the same since day one and I just try to craft it and get better and better. Sort of like an archer. You know, they’re trying to hit the bull’s-eye and they don’t necessarily evolve in their desire to hit that bull’s-eye but they practice and try to get more and more proficient and more advanced. My bull’s-eye is this core essential value of pure transcendent positivity and the method — my bow and arrow so to speak — is partying. Beyond that it’s just about consistency.

Q: Does that mean that in the 10 years that you’ve been offering your thoughts, you’ve never looked back at a piece of advice you gave and cringed at your statements?

A: I have doubts pretty consistently about my own efforts and my own actions in the world. I feel very, very insecure about all of that. But if the effort was done as a service toward this attempt at truth, I feel like that consistency is all that matters. The advice column, speaking, even just how we’re talking right now, they’re all efforts to try and get to that place. I do forgive myself for any failed attempts because I think that it’s the attempt that’s more meaningful. I think that we can be very forgiving of each other in our very embarrassing and humiliating attempts to get there if the attempt is noble.

Q: There’s a huge responsibility that comes along with giving people advice about life, which seems like it would require a great deal of self assuredness. Has that ever felt daunting to you?

A: Again, I’m just riddled with doubt. I’m self-assured in my doubt. I’m confident that I feel very insecure. I think the difference is that I feel like I’m on a quest. I feel like I’m serving a cause, and that cause is not me or the promotion of myself. It’s the promotion of this idea, this way of looking at the world. I’m the first to admit that I’m very ignorant, but I’m aware of my ignorance and [knowing that] does create openness for us to go to these places a bit more fearlessly and go there together and I think that’s one of the natures of partying.

Q: You advocate for partying in such broad terms. As a motivational speaker and role model, do you think it’s dangerous to speak about something like partying without narrowing it to exclude, say, excessive drug use?

A: Well, life is dangerous. All these things, in their vastness, in their freedoms, are dangerous, but in a way that we appreciate, in a way that makes us willing to take on the danger. So partying in its most basic sense is a bit hard to define, but that’s just the same as life. Life is this thing that’s the most familiar; it’s the experience of all experiences but it comes with all sorts of pit falls and challenges. And what partying is is trying to take that life force feeling — trying to take the experience called being a person — and making that leap of faith to declare that it is a good thing. Because we have a million reasons to not feel happy, to feel like life is bad and painful and just suffering, but we’re trying to go one step beyond that and look at the whole thing as this adventure full of ups and downs and [understand] that the whole thing must be beautiful because we decide it is. And that’s what partying is, a determination to maintain the belief that life is good in all of its complexity.

Q: You’ve made it clear that this is not a political tour. Is that difficult to do at a time when all people seem to want to do is talk about politics?

A: Well, maybe because people do want to talk about it so much [it’s] nice to have moments set aside where we talk about everything but that, where we talk about the principles that underlie that. Governmental politics, in particular, do make up a lot of our day-to-day lives and interactions, but they are not life itself. And we know that but, unfortunately, many people in political power want us to believe that all of our lives depend on this person, that they have the power to make or break our life in one fell swoop. Life is a very delicate but also very powerful thing that no one can affect other than the individual. The hardest work that can ever be done must be done by each one of us, one at a time from the inside out. So that’s the kind of stuff I’m trying to focus on in this lecture tour because, to be honest, I don’t hear most politicians discussing these types of principles and probably for good reason. They know that those aren’t the things that government can control. But these core values of life still belong to the individual.