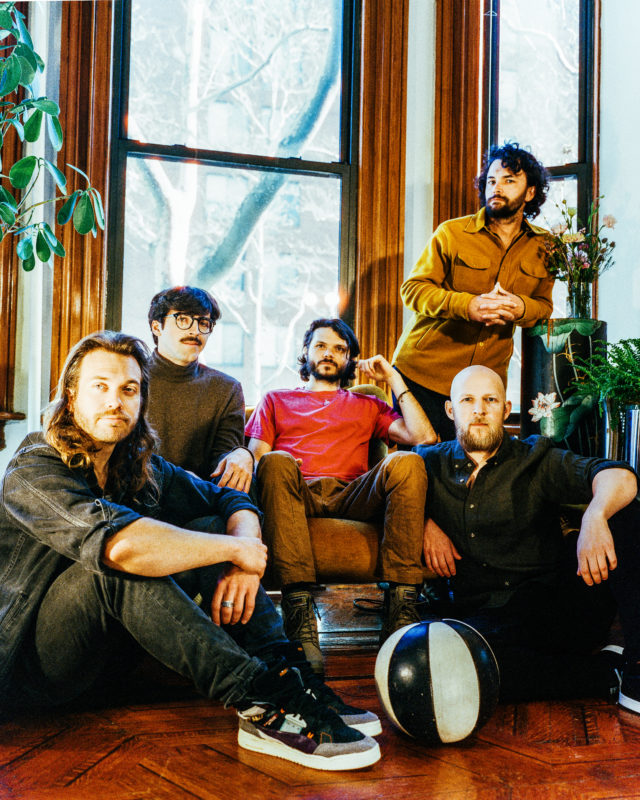 Peter Anspach wears many hats at his job. For that reason, he’s been anointed a number of nicknames by his bandmates in Goose, a talented five-piece wedged comfortably into the forefront of jam music’s current landscape. First, “The WizKid.”

“When I first joined, [the band] didn’t really have any content at all,” Anspach explains. He’d learned sound mixing, audio/video production and social media strategizing during his time with Great Blue, the rock-pop hybrid band he fronted for more than a decade. So, brick by brick, he worked passionately to elevate his new musical home.

Anspach’s efforts paid off—there’s now a bunch of other hands helping make these things happen. But Anspach is unafraid to step in and help whenever he can.

“I know there’s a certain quality that should be getting put out,” Anspach says. “There’s instances where we’ve been able to maintain it where it easily could not have been maintained. We’re all pretty involved.” It’s a supportive role that Anspach has grown to love throughout the East Coast outfit’s rapid ascension from coastal cult-heroes to must-see feature performers.

When the amps are plugged in and the lights come on, however, Anspach becomes “Handini.” At any given Goose show, Anspach is front-right stage, next to lead singer Rick Mitarotonda, surrounded by microphones, stringed instruments, and tiers of keyboards. This is Anspach’s sonic control room. The night ahead is at his fingertips. Inside his domain, the man sporting a million-dollar smile and mustache, belts vocals, pounds chords, and shoots funkadelic guitar riffs into the atmosphere. The sheer force and spectacle must be experienced in-person—Mitarotonda’s soft, buttery voice and sharp guitar solos, Ben Atkind and Jeff Arevalo’s deep connection to their library of percussion, and Trevor Weekz’s thick, resounding bass playing all combine to conjure a moment that often leaves show-goers asking: How are they doing that?

[The art of] Improvisational music

For Anspach, the balance between “same” and “different” at a Goose show is addicting. He describes it as a ritual experience.

“You’re with your friends,” Anspach says. “You have a routine to get to the show. You’ve got the place where you like to stand or dance, and an idea of a schedule in your head. But the music and performance is entirely different.”

Anspach has his show-day rituals, but when a set commences, Goose joins the sea of spectators by diving headfirst into a world of endless musical possibility.

No two shows are exactly the same. Anspach recalls a show in Charlotte, North Carolina, earlier this year, where Goose played “Slow Ready” into “Hot Tea”— two records off the new album, Dripfield.

“I was playing with my arpeggiator at the end of ‘Slow Ready,” Anspach explains, “then I changed keys and dropped the tempo a bit, right to where ‘Hot Tea’ was living.”

The band followed the cue and crept in flawlessly. Just like that, a new musical bridge was born. Who knows if they’ll ever play it that way again, but in that moment, the raw, hypnotizing power of jam music was on full display: the transition.

For bands like Goose, transitions are the one true “trick,” a spectacle that Anspach himself oftentimes doesn’t know the end result of until he’s playing it. In Legend Valley at Thornville, Ohio, Goose was comfortably ripping “All I Need,” a fan favorite. Then, suddenly, Anspach and the rest of the crew found themselves playing “Knights in White Satin” by The Moody Blues. A song by a ’60s prog-rock band an ocean away was brought to life before a sea of fans without predetermination. Like magic manifested.

Phone down, eyes up, heart open

In the “about” section of the PA—RC (Peter Anspach—Rebecca Chinman) website, a clothing brand Anspach founded with Chinman, is a story of the time Anspach was fortunate enough to share conversation with Jay Blakesberg, a renowned photographer known primarily for capturing the Grateful Dead in the ’70s. His images of dancing, free-spirited deadheads invoked in Anspach a sense of raw emotion not often seen in the digital age of concert goers. This inspired PA—RC’s first design: “Phone Down, Eyes Up, Heart Open,” and has since become a mantra for Anspach.

“Speaking from experience, when I’m on my phone, I’m in a different place than what I’d be in my physical form,” Anspach says. “When I’m using it, and somebody is trying to talk to me, I don’t hear what they’re saying.”

The experience of live music is highly spiritual, a chance for connection.

“Those are moments you want to cherish,” Anspach says. “If you bring out your phone at the dinner table, it’s rude. So it’s funny how it’s not rude at a concert.”

Anspach recognizes there’s a difference in intimacy between the two settings, but the notifications on a home screen can wait—this moment, right now, cannot.

When Goose makes the trip to Dillon Amphitheater and Red Rocks in a week, the latter a monumental debut for the band, Anspach hopes the only thing separating the mystique on stage and the eyes and hearts of spectators is crisp mountain air.

Goose’s Colorado shows almost always sell out. Whether it’s Cervantes Masterpiece Ballroom in 2019, two days at Sculpture Park outside the Bellco Theater in 2021 (record crowds for the venue), and most recently Mission Ballroom later that year, Goose and the Centennial State have a profound mutual respect.

“Colorado has been incredible to us,” Anspach says. The band’s upcoming shows are the next rung on the ladder, and in many ways, the highest bar for any jam band in a state littered with iconic venues. Goose plays Dillon Amphitheater on Tuesday, Aug. 16 and Wednesday, Aug. 17, then Red Rocks on Thursday, Aug. 18.

“It’s going to be the best Tuesday-Wednesday-Thursday ever,” Anspach says with a laugh. In July of 2021, Anspach got a taste of one of his “bucket list” venues when String Cheese Incident invited him to come up and perform during a Red Rocks set.

“I was pretty nervous,” Anspach admits. “The crowd was an ocean. It just looked unbelievable.”