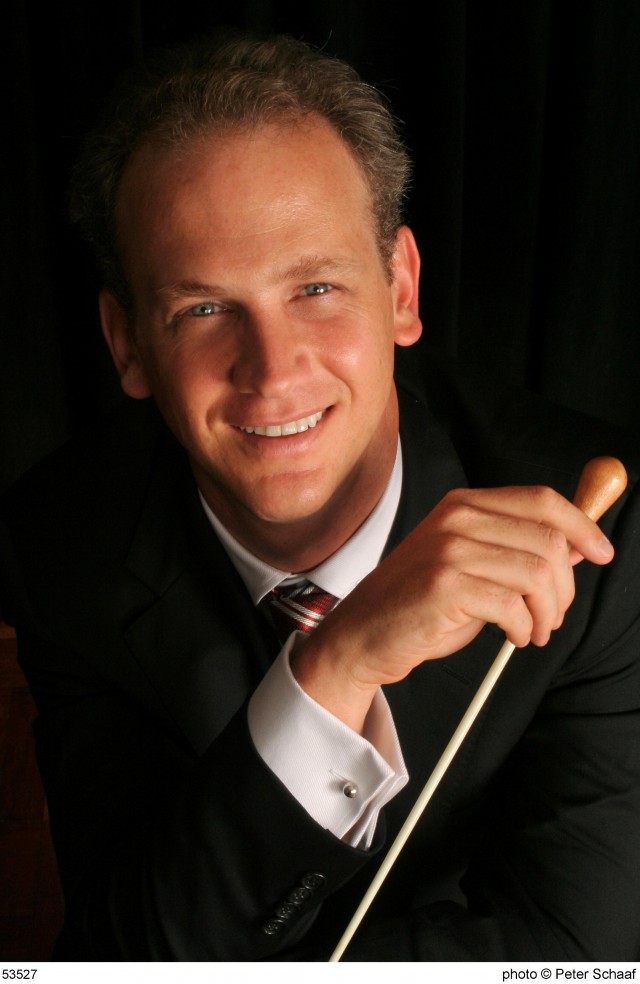 Soloist with the Festival Orchestra will be mezzo-soprano Abigail Nims from the University of Colorado music faculty, in a performance of the complete “Three- Cornered Hat” ballet by Spanish composer Manuel de Falla. Other works on the program are the colorful “Suite” from the ballet “Estancia” by Argentine composer Alberto Ginastera, and the original 1911 version of “Petrushka” by Stravinsky.

For the Chamber Orchestra concert, the Swiss-born American pianist Gilles Vonsattel will play Mozart’s Piano Concerto No. 21 in C major with the orchestra. Other works on that program are the “Symphony No. 49 in F minor,” by Joseph Haydn, and Beethoven’s cheerful Fourth Symphony.

“I wanted to do two very contrasting programs,” Prieto says, “one with a very colorful orchestra of early 20th-century dimensions, and [one] with a completely classical-period program.

Diaghilev. ‘Petrushka’ is one of the most successful commissions, but less wellknown is Falla’s ‘Three-Cornered Hat,’ which is also a Diaghilev commission that included Pablo Picasso as the set designer.”

The two ballets tell essentially the same story: A young woman is pursued by two men, one who is “good” and one who is “bad.” In “Three-Cornered Hat” the outcome is comic, as a lecherous magistrate is hoodwinked by a miller.

“Petrushka,” on the other hand, is tragedy, ending with a carnival puppet hacked apart over his love for a ballerina and then returning to haunt the puppet master.

Prieto has the style of de Falla in his blood, since his family came from Spain and both grandfathers were close to the composer. Falla’s pieces are “things I love and have been close to all my life,” he says.

“They represent challenges that are unsuspected, because there is so much behind the notes that rehearsals become a lot of fun. One of the challenges is the character and color, and understanding the humor behind the music. This has to do with a very old tradition in Spanish theater, which is the parody of the ridiculous.”

“Petrushka” is better known, but most orchestras perform the 1947 revision that reduced a large orchestra to more normal proportions.

“This is the original version, which has quadruple winds,” Prieto explains. Later, Stravinsky “reduced the winds, and reduced the percussion. [The 1911 version] uses three keyboard players; 1947 uses one. For me the ‘Petrushka’ 1911 is just an incredible experience.”

If the Spanish “Three Cornered Hat” and the colorful 1911 “Petrushka” represent some of Prieto’s favorites, so does the programming of a rarely heard Haydn symphony.

“I’m a complete Haydn fan,” he says. “I used to have a festival in Mexico City around Haydn, so I’ve done about 65 or 66 Haydn symphonies up to now.

“What I used to do to program symphonies that I didn’t know is roll dice! Whatever number would come up is the symphony that I programmed. And I think there is no bad Haydn symphony.”

Symphony No. 49, known as “La Passione,” was written in 1768, during what is sometimes known as Haydn’s “Sturm und Drang” (storm and stress) period. The title was not given by Haydn, and may or may not refer to performance during Holy Week. Curiously, one early copy carries the counterintuitive title “The goodhumored Quaker,” which is equally inauthentic.

The rest of the program for the Chamber Orchestra concert is what Prieto calls “a classical origin-of-orchestra, Haydn-Mozart-Beethoven program.” Mozart’s C-major concerto is one of the composer’s most popular pieces, having been recorded by dozens of pianists from Rudolf Serkin to Keith Jarrett. It was made famous in the late ’60s by its use in the Swedish film Elvira Madigan.

Beethoven’s Fourth, on the other hand, is one of the composer’s less familiar symphonies. As one of his lighter and more classical works it is a good fit for the rest of the “completely classical-period program” Prieto has chosen.

As a pair, the two concerts will clearly show off the orchestra’s, and the conductor’s, versatility. But Prieto says, “That’s not what’s in my mind. What’s in my mind is to present the best possible concerts.

“The most important thing is that the concerts are attractive to the audience and propose something interesting.”

For anyone intrigued by new musical discoveries and stunning contrasts: mission accomplished.