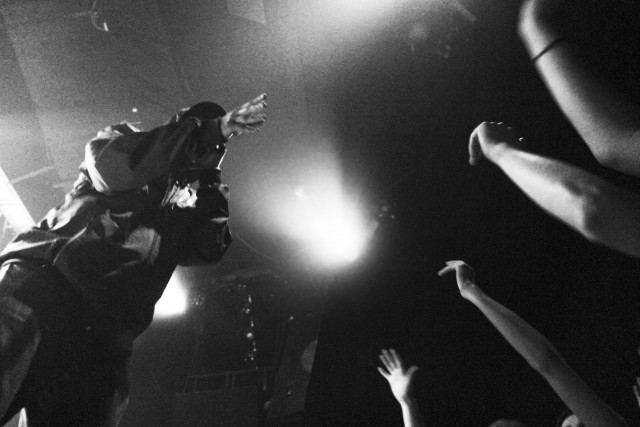 Atmosphere’s Slug took the stage looking solid and sounding solid, the confidence of a 39-year-old MC in a town that loves him as tangible as the sweaty shoulders the hundreds of fans packed like sardines in every corner of the Fox. Any musician approaching their 40s has a scrutinizing lens focused on their relevancy and energy, and rappers are easily the slowest targets. But if you heard anyone in Boulder today talking about how Atmosphere has lost it, you’ve found a bitter person who didn’t get a ticket to last night’s show at the Fox Theatre.

What an honor it was to catch Atmosphere on this night, in a venue much too small at the end of a string of “Family Sign” tour dates. The Fox was uncomfortably stacked with reverent fans who came to give their respect more visibly than to get a buzz and nod their heads. Slug was visibly exhausted but had that finish-line smile, and more importantly had the determination to give everything back to the crowd.

Atmosphere opened with “Guns and Cigarettes,” opening with the crowd-pleasing line “Is it okay if we do some old shit tonight?” that followed with a hungry roar stretching all the way to the bar. Slug stops moving for a moment to absorb it, smiling wryly. “Yeah, that sounds pretty nice.”

Understated: it sounded superb. The relatively new live-band format effortlessly recreated the music that spans nearly 15 years, and everyone knew the words to each song in the set. The live band thing really works for Atmosphere, and that’s not to say that producer Ant needs any more help than a modest crate of vinyls. Guitarist Nate Collis and keyboardist Erick Anderson are welcome additions to the family, and I hope they continue to stick around. With the live guitar and keyboard lines snapped tightly onto the essential booms and baps provided by Ant, it was a joy to hear and even better to see that many musicians could share the spotlight on what could easily be seen as “The Slug Show.”

Any excuse to put hands in the air were accepted with gusto, even if Slug caught a few people with the hilarious line, “Everybody put your hands in the air… (hands fly up) if you already masturbated today.” The group has little concept of taking anything too seriously. After a strobe-and-volume-heavy performance of “On and On,” Slug jokes that it is as loud as it can get.

“If I was a smarter rapper, I probably would have ended the set with that song. Actually, that’s a great fuckin’ idea, thanks, we’re called Atmosphere,” he said.

Cheerful boos ensue as he runs toward the exit; it’s only been an hour, and everyone, including the band, knows the best is yet to come. No one doubts that Atmosphere can turn it up to 11, which is exactly what Slug suggests and delivers.

How does one turn it up to 11? Slug didn’t bounce around the stage like an overeager MC. He talked about stage diving but looked skeptically at the comfortable-looking bed of outstretched hands. The energy wasn’t about some lunatic with a mic stirring the pot of shock and awe, it came from the concrete flow of nearly 15 years of rhyming on life’s truisms, and most importantly from the two-way connection between performer and audience. The crowd was in reverence as Slug did the same thing he presumably does every night in every city, standing motionless not only because of crowd density but in moments of awe.

The most important moment of the night came and went in a flash: during “Trying to Find A Balance,” the crowd gave an especially strong reaction with cheers and fists in the air. They had been soaking in reverence of their hero all night, but at that particular moment, the tables turned and it was Slug’s turn to be lost in the moment. He didn’t say anything, and quickly regained composure. He would later remark that he felt like moving here. But the look on his face was beautiful and priceless, showing that no amount of touring has fazed the surreality of hundreds feeling your words in their soul.

Reverence really was the word of the night, and it was a two-way street. I believe that turns it into love. Sure, it was funny rhymes and banging beats that brought everyone together, but something beyond words formed a bond that made the night something to commemorate. When the band took several minutes to pour encore shots, unable to find that missing shot glass for a solid minute or two, mumbling to each other, exchanging the glassware they had, Slug still talking into the mic as all this is happening – people in the balcony clicked together cans of beer and shot glasses, toasting to each other. Slug sings that every day is the best day of your life, wants you to shout for the person standing next to you as much as he wants it himself — life is easy to enjoy when you’re at a killer Atmosphere show, but with a well-worded toast, things never look as bad.