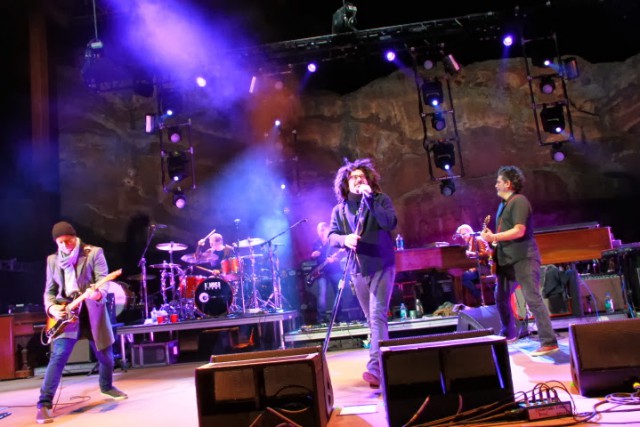 It’s been just more than 20 years since Counting Crows released its first studio album, August and Everything After, and still the group opened an Oct. 12 performance to a sold-out Red Rocks Ampitheatre audience with a track off that first record, “Sullivan Street.”

Followed by covers of The Roman Rye and Coby Brown, Counting Crows set out to close the Red Rocks season with a little of everything they’ve been up to since the very beginning. The band performed hits from all of their studio albums [August and Everything After, Recovering the Satellites, This Desert Life, Hard Candy, Saturday Nights & Sunday Mornings and Underwater Sunshine (Or What We Did On Our Summer Vacation)], ranging in instrumentation from mandolin to baby grand piano to accordion and a number of roaring guitars. The show appeared organized as an array, a tour of their greatest hits and work illustrated as cameras panned across the band — all older, with slightly wrinkled eyes, shorter hair, more practically dressed for the cold, some even fathers. The loyal audience, it seemed, hardly noticed a thing had changed.

Lead singer Adam Duritz’s following can be attributed to his charisma and unpredictable live performances. On tours he famously stands on the speakers, swings the microphone stand, reaches for the audience, whips his hair around, changes lyrics, extends songs, and, often, inserts entirely new pieces into the chorus or bridge of a popular tune. During a performance of “Round Here” Duritz leapt to the front of the stage, moved from one end to the other, and fell over one of the amplifiers. Catching himself enough to swing his legs around and sit, his lyrics changed to “cool as kittens,” receiving laughter and applause from the audience.  As the group went into the opening riffs for arguably their biggest hit, “Mr. Jones,” the audience lit up with cell phones being held up for photos, and Duritz bounced at the microphone as in the original 1993 music video, spun around stage to the chorus, and shared the spotlight with each musician in turn.

Band member Charlie Gillingham joined Duritz center stage as they rolled out a stand-up piano and a bright red accordion for “Long December.” The old friends handed over attention to guitarist Dan Vickrey as they went into an interlude from a lesser known (and rarely performed) Counting Crows song, “Murder of One,” echoing “I am feathered in the moonlight” until the crowd waved their hands and sang along.  During “Rain King” the band once again broke from structure to insert the entirety of folk song “Oh! Susanna,” during which Duritz admitted he had stopped singing to try to recall the final verse of the tune.

Returning to the Counting Crows song, the band broke down into simply percussion and vocals, audience fixated on filling in the chorus as Duritz pointed the microphone outwards. During the final lines of the song, Duritz quietly invited his fans to “come in out of the rain,” looking at his extended palms as they reached out to catch droplets only he could see. The stage went black for a moment, the band filed off, and the stage crew appeared to clean up. With determined cheers warming the air, the audience seemed to demand the band’s return, and they happily obliged.

Counting Crows treated the audience to a final three-song encore, seemingly Duritz’s love letter to his fans in this one-off show — a song about leaving and coming home, a shout out to his parents in the audience, and a “lullaby” for the audience, a final extended tune, Duritz joked, about waking up with a hangover. He once again invited the audience to join him and “catch a plane to Barcelona ‘cause this city’s a drag.” Before continuing he held the silence, and appeared to wait for someone to accept the offer.

Duritz introduced the band at the end of the show in a familiar way — “This is my friend Dan, my friend Charlie, my pal Dave, my childhood chum Millard.” As the band cleaned up and the audience filed out, Duritz stood on a lone amplifier and called out, “We’re working on some new stuff. … We’ll have a new album for you early next year.” The crowd filed out as he conducted them to the filler music playing through the theater. “See you real soon,” he promised last, and 20 years have barely passed.