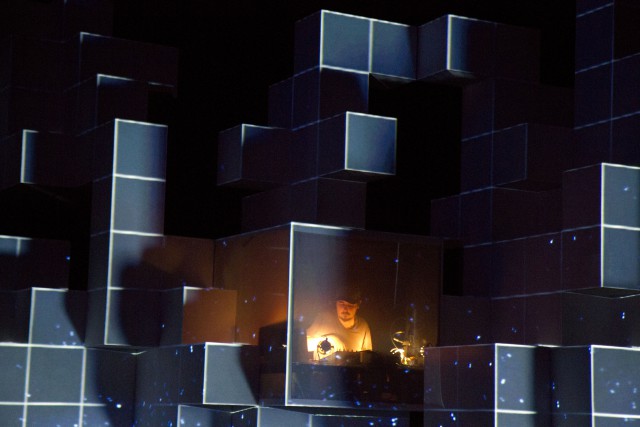 Bravo, Amon Tobin. That is how you put on a transcendental light show. I feel like I just witnessed Berlioz conducting his Symphonie Fantastique.

The ISAM installation is a gorgeous and unprecedented display of technological mastery featuring Amon Tobin. With Tobin only visible in fleeting moments before ISAM swallowed him up again, it really did seem like the shape-shifting cuboid was actively trying to steal the show from its master. It was a mesmerizing experience, a combination of light and sound executed with such precision that ISAM breathed and shifted by its own autonomous will.

This show was like seeing a mostly plotless 3-D movie scored for bass heads. There was no room inside for dancing, and it’s just as well. I have never seen a concert audience attentive and reverent in this way. There was plenty of silence but plenty of cheering, especially when the central cube would light up from the interior and reveal the man himself at work: Tobin, twiddling away at unidentifiable machinery like the Wizard of Oz, triggering plumes of digital smoke and fiery explosions all around him.

Even as Tobin cranked up the volume on his Pure Filth soundsystem (the Boulder Theater has never sounded so good), and even when his remix of Noisia’s “Machine Gun” brought the music into rowdy drum and bass territory, the crowd remained entranced.

ISAM’s effect in a word: beauty. No matter how intense the experience became, it never lost the sense of grace when one comprehends the geometry of a rose blossom. That is where Tobin deserves the most credit — no one is capable of creating a microcosm experience quite like he can, and he proved he is the capable, rightful master of ISAM.

3-D projection is a hot piece of technology nowadays and has an incredible capacity to create a sense of movement. For the grand finale, the outlines of the Tetris-like shapes that formed the background were constructed seemingly by laser-point, then rotated on horizontal and vertical planes in a way that made you swear the setup was not stationary. The crowd was close to sheer applause as the cubes tumbled sideways and disappeared, only to move in reverse and return to form again.

Tobin told me before the show that these were not arbitrary images lacking a true connection to the music. It is a visual representation, a storyboard for his music that makes some sense of the mechanical clicks and purrs of Tobin’s work.

If there was some narrative that drove the imagery, it probably would have gone something like this:

You are a spaceship, a living and breathing mechanical vessel embarking on a dangerous launch through the galaxy. Space is inviting at first: the constellations link into dots and lines that caress your hull like seaweed forests and flex gently with your passing.

But a launch into hyperdrive causes matter itself to fizzle into static. The only thing keeping you safe is the enormous electromagnetic shield you create to deflect the intense gravitational experience. Your inner mechanisms, your heart and central nervous system, confidently spin and hum even as nebula clouds threaten to collapse you.

You reach your destination, a crystalline planet of amber clouds and jagged towers. With danger behind you, your mapping system reaches out across the landscape and navigates you safely between the dagger-like towers. You take this time to project an image of your human self onto the clouds, using digital fingers to compose a rippling symphony.

And then there are some cubes and shit.

It’s important not to be too dramatic about the show. The potential for 3-D projection is clearly incredible, and Tobin deserves all of the praise he will win on this tour. He is certainly the leader in what should be classified as an artistic effort separate from dance-oriented dubstep that sounds like an antiquated diesel engine in comparison.

But right now the only thing on my mind is, what next? What could possibly be next? How much further can we bend imagination and perception be bent? What will Tobin’s next album sound (and look) like? How will Skrillex and his 3-D projected “Skrillex Cell” fare this Halloween at the 1stBank Center? Like Tobin, I am only concerned with the future.