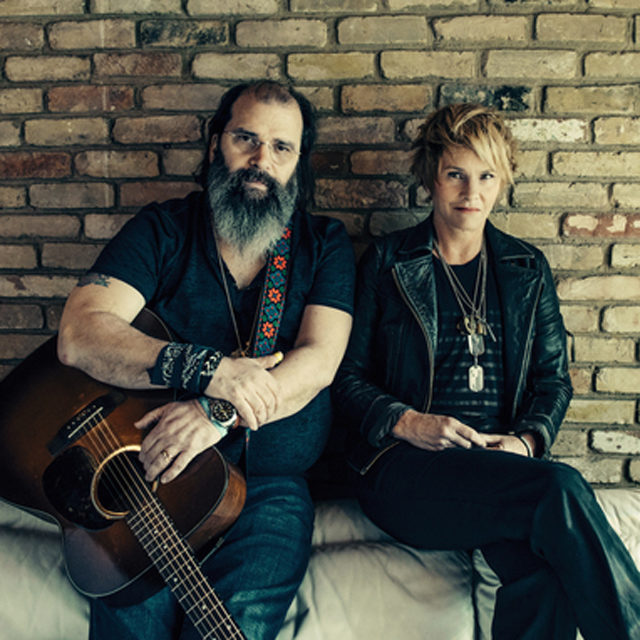 I’m on a phone interview,” Shawn Colvin yells — away from the phone — about 10 minutes into our chat. “It’s Steve,” she explains. “We’re sitting outside waiting on a bus.”

And then, her head clearly turned away from the phone’s mouthpiece, “She’s asking about when you found out about me doing ‘Someday.’”

It’s Steve Earle she’s talking to. The singer/songwriters have been on tour since June 10 in support of their album Colvin and Earle, which sees the solo artists merge into an effortless folk duo.

Colvin continued to dominate the ’90s folk scene with her 1994 Grammy-nominated album Cover Girl, an eclectic collection of cover songs ranging from Sting to Tom Waits to Talking Heads. Tucked in there was Earle’s “Someday,” a song about a restless young man (a woman in Colvin’s version), feeling mediocre in a job at a small town gas station, dreaming of getting out of there “someday.”

By this time, Earle’s success had been overshadowed by his devil-may-care exploits.

The same year Colvin released Cover Girl, Earle was arrested for heroin, cocaine and weapons possession. He was sentenced to a year in jail. (He served only 60 days and spent the rest of the year in rehab.)

In 1994, Earle might not have been stuck in a small town, but he sure as hell felt stuck.

Earle has said hearing Colvin’s cover was a point of light, “because Shawn recorded it when I was completely off everybody’s radar, including my own.”

The two had crossed paths before Colvin covered “Someday,” and they would go on to team up for a handful of acoustic tour dates. But a couple of years ago, Colvin got the idea to call Earle up and ask if he wanted to “get together and go on tour and have some camaraderie together.”

Some shows followed and it was clear the two had undeniable musical chemistry, the roughness of Earle’s baritone soothed and accentuated by Colvin’s sweet contralto. This pairing was worth more than a few live shows, so Earle suggested they put together an album.

They holed up in mutual friend Buddy Miller’s Nashville studio with a top-notch band behind them: Miller on baritone guitar; guitarist Richard Bennett; drummer Fred Eltringham (who’s played with Willie Nelson); and bassist Chris Wood of Medeski Martin & Wood. It only took a week and a half to lay down the tracks that made it on the album.

Colvin and Earle co-wrote together and sang the majority of the album’s 10 tracks in harmony.

“We wanted this to be more like a duo — like a Simon and Garfunkel thing, if you will,” Colvin says.

Their cohesion is clear in the first single, “You’re Right (I’m Wrong),” a billowing dark work that uses mournful Southern sounds to examine the complex — and often manipulative — nature of love.

It’s not surprising these two bastions of contemporary folk work well together — neither has a history of hiding their demons. In 2012, Colvin published her memoirs, Diamond in the Rough, chronicling her experiences with anorexia, clinical depression, alcoholism, motherhood and relationships with men. Earle has always been candid, in the press and in his music, about his many marriages (seven to date) and recovery from drug addiction.

“I think there’s perhaps a core… how do you want to put it… sense of sensitivity in a lot of artists that make them less armored against intensity and intense emotions,” Colvin offers. “There’s a need to express that somehow through the art and the work.”

And while she and Earle may have gone through hell, she in no way believes that’s the best path to being a great artist.

“When you’re at the bottom of the pit with clinical depression, no work is getting done,” she says. “It can’t be romanticized, that kind of illness. That’s not just having a broken heart or being angry about the state of the climate. It’s a disease. And so is addiction, for that matter.”

Colvin hollers at someone in the room to grab her smallest suitcase, “the purple one.” She says we’ll have to get off the phone soon because she’s running out of privacy.

No matter. There’s plenty more to explore in the body of both artist’s catalogs.