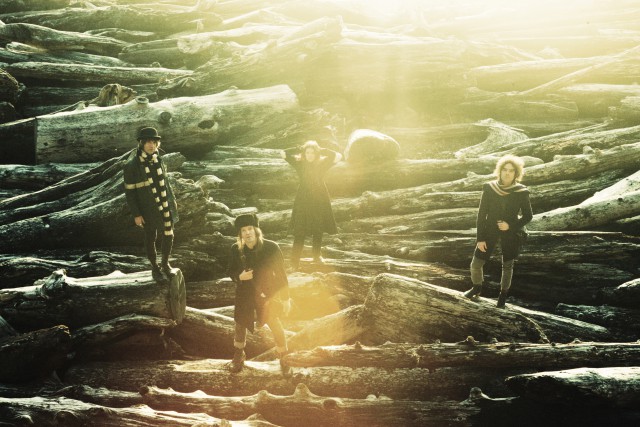 Bad publicity may be an oxymoron, but there’s certainly no joy in being painted black.

Particularly out of nowhere. It’s something the Dandy Warhols are familiar with after being cast as the evil half of Ondi Timoner’s Sundance-winning 2004 documentary/ morality play, Dig!

If Kim Kardashian and The Hills taught us anything it’s that if you have enough video you can tell any story you like (even one about nothing), and Timoner shot the Warhols for eight years. In formulating a simplistic enough story on art and commerce to convey in 105 minutes, Timoner pulled footage of the Warhols at their most decadent and superficial over the years and pitted it against 10 months of footage of volatile “artiste” Anton Newcombe and his band Brian Jonestown Massacre.

Overnight the Dandy Warhols came to epitomize bloated indie rock sellouts. It was a strange role for a Portland band that could hardly play their instruments when they started and never sold a ton of records.

“It’s not a documentary — or it shouldn’t be titled one because it uses footage that happened and footage that was re-enacted to tell a story the director wanted to tell. One that ultimately is a successful story, but is not true. And we’ve suffered from it,” says guitarist Peter HolmstrÃ¶m. “It’s nice to have a movie out about you, but I guess I wish it was a little bit more about the music, because that’s what we were all in it for.”

The band has blended garage, psych and hook-laden indie rock since getting its start in the mid-’90s when HolmstrÃ¶m finally hooked up with Courtney Taylor-Taylor. (Born Courtney Taylor, at some point in the late-’90s he passed through a supernatural tunnel, Being John Malkovich-style, and wound up Taylor-Taylor.)

HolmstrÃ¶m had first spotted Taylor- Taylor at a summer music camp and noted that “he was pretty much the coolest guy there.” From then on HolmstrÃ¶m kept track of the suave, lanky singer-guitarist’s doings. (At the time Taylor-Taylor was a drummer.)

“Eventually he got kicked out of his band and I was there at the right time to help him start this one,” he recalls. “Our sound came out of the fact that we didn’t really know how to play very well.”

As a result, the songs were simple and straightforward in the beginning. An obvious and frequent touchstone is the Velvet Underground, blending both their hypnotic thrum and their gift for a catchy hook. The songs were cheeky and clever — from the distortion-drenched “Hard On For Jesus” and caustic “Not If You Were The Last Junkie On Earth” to mesmerizing philosophical odes to “Nietzsche.” It wasn’t exactly Limp Bizkit.

Their 2000 release Thirteen Tales From Urban Bohemia boasted an infectious little kiss-off to bandwagon jumpers, “Bohemian Like You,” which in the tradition of Nirvana became a huge hit among those they sought to piss off. They released two major label discs sandwiched around Dig! and then found themselves without a label in 2007.

“It was a little bit of a blow when we got dropped by Capitol, but then about a week later we realized we’d been trying to get off Capitol for years,” HolmstrÃ¶m says. “We’ve definitely had our low points. A few years back we got a new manager, and the best thing he did for us was get us talking again. It was like a year after he came on and got us talking that we got dropped. Who knows what would’ve happened if we weren’t talking back then. Odds are we would’ve fallen apart.”

Instead they’ve forged on. In 2008 they released …Earth to the Dandy Warhols…, which found them indulging all the tricks available in their huge studio/rehearsal/living space, the Odditorium. For their new album, This Machine, they’ve stripped away the layers and returned to a live garage-psych sound harking back to their first album.

“The way we approached the record was as a back-to-our-roots kind of thing, stripped down. Since Pro Tools came into the music world you can do so many tracks that you get carried away,” he says. “I think we did go crazy with it. Now we know that we need to set some limits on ourselves.”

Though they’re still pretty popular in Europe, America remains a hard hoe, especially now that they’re back on an indie. But at least enough time has passed that Dig!’s pretty firmly in the rear view mirror, and they’re back to being spunky underdogs.

Or to be around to fight at all.