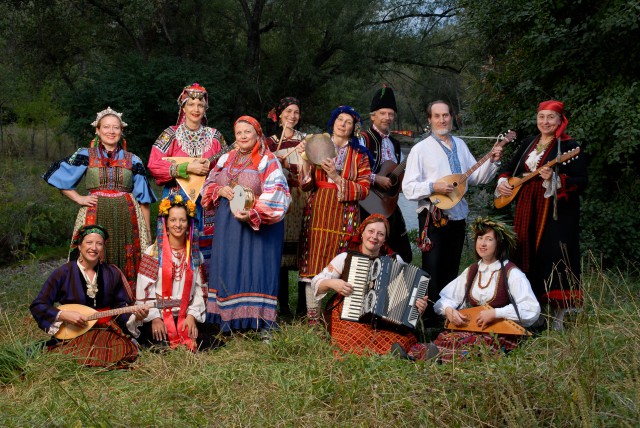 If you missed New Year’s the first time, Planina offers you another chance to celebrate.

Planina (“mountain” in southern Slavic languages) is a group of singers and instrumentalists specializing in the folk music of eastern Europe.

Their “Stara Nova Godina” (Old New Year) performance at 7 p.m. on Saturday, Jan. 14, in Boulder’s First Baptist Church falls on the date of the New Year according to the old Julian calendar used by the Slavic Orthodox Church.

“We thought this would be an ideal time for our concert, because it’s a festive occasion, yet it’s not in the middle of December when everybody else has their concerts,” Julie Lancaster, Planina’s director, says. “And to help with the eastern European theme, one of our friends who has a business making baklava has prepared some eastern European treats for sale [at the concert].”

Planina goes back to the late 1980s, when Gordon McDaniel, a CU professor of Slavic languages, organized informal “house-sings” to explore folk songs he had sheet music for. Under his direction, these informal get-togethers evolved into the Planina Balkan Women’s Choir. More recently, the group has added men — there are now four of them and about 10 women — which gives them access to music that women alone could not perform.

“When that happened, we looked at each other and we said, ‘Men?’” Lancaster recalls. “We couldn’t even imagine how that would affect our whole experience, but in fact it’s turned out to be wonderful, because it really gives us the opportunity to have a more varied program.”

Lancaster acknowledges that she has an unorthodox background for a conductor. Largely self-taught as a musician, her scholarly background is in Chinese. So how did she get from Chinese studies to eastern European folk music?

“I had a little bit of formal piano training as a child and I was in choruses in school, but I never took any music classes in college,” she says. “[But] I liked exotic things. I fell in love with Russian and Hungarian music, at a very, very young age.”

For many years she explored the exotic through folk dance, which she was doing when McDaniel started the house-sings and then the women’s chorus. Part of what appeals to her is the irregular, asymmetrical rhythms that arise from the Slavic languages. “As a dancer,” she observes, “you learn how to move to those interesting rhythms, and that was part of what we liked about this music.”

Planina, which performs in colorful eastern European folk dress, will perform more than holiday music on Saturday’s concert. “We’re just singing songs that we love,” Lancaster says. “We have songs from many different countries, and they’re organized according to what we think would make a pleasant program.

“There are several songs that are Christmas- or solstice-oriented, so we’ve positioned the concert as being about bringing back the light. There’s a Christmas song from Belarus, but there’s also a Georgian love song that’s mainly sung by the guys in our group — it’s to die for — and there are several dance tunes.

“Some of our fans are folk dancers, and we anticipate that some of the people will want to get up and dance on a few tunes. I think they can dance around the aisles in this church, and this typically happens at our concerts.”

In addition to the songs from Georgia and Belarus, the concert will feature music from Croatia, Armenia, Albania, Russia and — outside the Slavic realm — Latvia. But the largest component of the program comes from Bulgaria.

“We have quite a few Bulgarian songs,” Lancaster says, “and that’s because we’ve worked with more Bulgarian teachers than any other kind.”

What’s more, members of the group have traveled to Bulgaria on two different occasions to learn songs and styles from local village musicians, and there is a large supply of printed music that has been popularized by “Mystere de la voix Bulgare” (The mystery of the Bulgarian voice), the Bulgarian state radio and television female vocal ensemble that has toured the U.S.

Lancaster says the ensemble is looking forward to performing in a concert setting.

“We perform so often at outdoor festivals, and we are not able to do the more nuanced pieces because those outdoor settings are better for the liveliest, louder pieces,” she says. “As a result, we often just put aside some of our favorite pieces, because they’re not really at their best [outdoors.] So we’re excited about this setting because it’s beautiful acoustics in the First Baptist Church, and we get to do some of our very most delicious material.”

Roots and wings, shadows and light