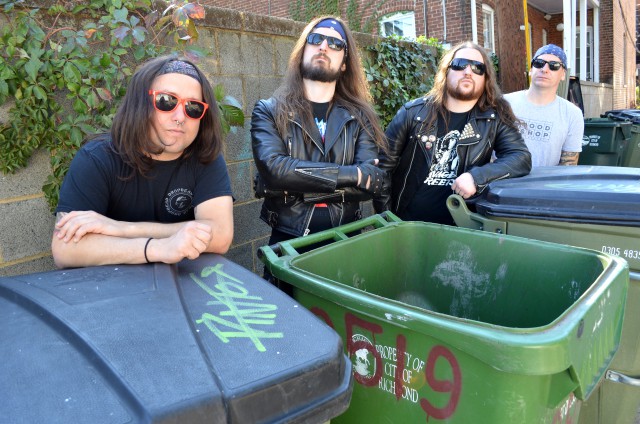 How can you have an ’80s revival without inviting the skaters? You can’t, which is why over the last half-dozen years there’s been a thrash resurgence — a wave Richmond’s Municipal Waste was out in front of by five years. Started in 2001, the quartet’s proven one of the finest old-school exponents muscling sludgy metal breakdowns and racing hardcore rhythms through a mixture of politics and smart-ass humor.

“We started from the ground up, and when it blew up we were already working on our third record,” says frontman Tony Foresta, who started the band with guitarist Ryan Waste. “We were like, ‘What? We’ve already been here! You guys are a little bit late.’”

Their sound’s informed by underappreciated classic acts like Suicidal Tendencies, D.R.I. and Corrosion of Conformity as well as the Big Four (Metallica, Anthrax, Slayer, Megadeth) with plenty of chugging, heavily leaded riffage, thick pulsing rhythms and clean, relatively decipherable lyrics. (No death-metal Cookie Monster growls for them.) From the beginning they’ve demonstrated a lot of creativity within the style’s narrow confines.

Though their 2005 second album, Hazardous Mutation, attracted some buzz, it was 2007’s Art of Partying that made them poster children for thrash’s renewal.Â

As the title suggests, the album’s a snarky ode to late-night shenanigans characterized by tracks like “Beer Pressure,” “Chemically Altered,” “A.D.D. (Attention Deficit Destroyer),” and the macabre “Headbanger Face Rip.”

2009’s Massive Aggressive is a response to the last album, mothballing their goofy side in favor of religious/political rage (“Divine Blasphemer,” “Relentless Threat,” “Media Skeptic”). They bring those two poles back in balance with their forthcoming fifth album, Fatal Feast (out April 10.).

“This album has [some politics] but is more back to the tongue-in-cheek humor. We wanted it to have all the elements from the other albums we liked and still tweaking it to where it’s a classic Waste album,” he says. “There’s a lot of the more humorous stuff, the more serious stuff, the faster stuff, the rocking shit and even a MotÃ¶rhead-y song in there too. It’s a little different, but it’s still a Waste album, and you can tell.”

The band was worn out after Massive Aggressive and took extra time off. When the members returned, they decided to produce their next album themselves. Four albums in, they’ve got a pretty good idea what it should sound like and didn’t see the point in paying a producer to act as a middleman. Instead they used that money on more studio time, spending nearly a year working somewhat leisurely on the album. They recorded the drum tracks at the studio of drummer Dave Witte’s old band, Burnt By the Sun, and the rest in Richmond not far from their house.

“We spent as much money as the last time for probably twice as much time and took our time with everything and recorded way more material,” he says. “You can sit on it a little longer and listen to it to see if it’s the right thing or not. … It was great to go into the studio for three hours a day then go hang out and do something else. It was way more relaxed.”

They also changed labels after seven years and three albums with Earache, moving to German label Nuclear Blast. Earache rescued them from obscurity and first brought them across the pond after Hazardous Mutations, exposing them to the more voracious European audiences. They’re thankful, but it was time to move on.

“We just needed to do something different. It was kind of getting stale,” Foresta says. “So it’s cool Nuke Blast came along. It was like nailing this new blonde.”

Right now Foresta’s intent on nailing down their new set. They’ve been reaching back in the catalog and are looking to show everybody a fast-paced good time.

“We’re going to play lots of hits and we’re bringing back some old shit we haven’t played in years, like ‘Guilty of Being Tight.’ We’ve played it live about three, four times ever,” Foresta says. “It’s going to be one of our better sets we’ve played.”

It better be. They’re opening for GWAR, whose fans are notoriously impatient about opening bands, often beginning to chant for them before the other bands are even finished. (It’s known as being “GWAR’d.”)

“It’s kind of weird that I’m not worried, because I should be,” he says. He’s toured with them before, in an earlier, safer slot on the bill. “I think the GWAR crowd respects us differently than a lot of metalcore bands. … They know we’re from Richmond too and like brothers of GWAR. Hopefully there will be a mutual respect, but I know there are going to be some towns where it’s ‘fuck you.’”

That’s OK with them.

“People know what we’re doing is real. It’s not some gimmicky cash-in, and people of all ages appreciate it,” he says. “It’s all about whether your heart’s in and what you’re willing to put into it.”