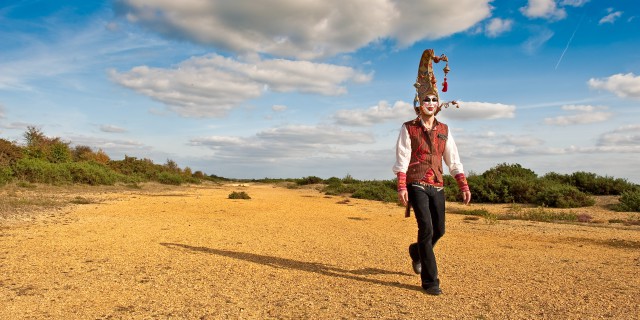 Every time Simon Posford rolls into town, two things are
certain: He’s bringing something (or someone) that will absolutely blow
minds, and a large crowd of vision-seekers will gather to stand
directly in its line of fire.

Those lucky enough to catch Posford’s latest attempt to up the ante will experience the Shpongletron,
a beautifully terrifying structure that stands almost 20 feet tall and
includes four levels of projection screens, animatronics, dancers on
lofted platforms and 3-D mapping, all designed by the infamous VJ
Zebbler.

“He’s probably one of the only people I know who has
managed to close down a whole city,” Posford says, referring to a
promotional project the visual designer undertook for a cartoon show
that was misinterpreted as a terrorist attack. “He’s got a very
artistic sort of personality and is very creative. We’re really happy
to have him build this thing and do all the lighting.”

Anything Posford touches turns to psychedelic gold. In
1996, he paired up with Infinity Project member Raja Ram to launch
Shpongle, creating an energetic yet meditative brand of trance music
that incorporates Eastern instruments with backwards vocals and a
universe of synthesizers. Aside from his solo DJ project, Hallucinogen,
Posford frequently collaborates with Benji Vaughan (aka Prometheus) in
the instrument-driven project Younger Brother, featuring Furthur
drummer Joe Russo, among others, as well as a No. 2 spot on iTunes’
Dance chart for their latest release, Vaccine.

If each collaboration represents an inner creative child
within Posford, Shpongle would be a 15-year-old guru with four heads.
It’s heavily driven by psychedelica and creating a convincing alternate
reality through light and sound. Posford nearly begs you to ask what
drugs he’s on; in actuality, performances are a sober endeavor.

“It works for some people,” he says, citing artists
ranging from Pink Floyd to Bob Marley who have been open about the
positive effect of drugs on their music.

“For me, I can’t do it, certainly with a computer,”
Posford says. “At times, even when I’m just DJing, I’ll find myself
playing the same song twice, forgetting whether I’ve played it or not …
y’know, ‘This sounds amazing! Ah shit, I just played it. Or have I?’”

Drugs of all kinds continue to influence music, and
electronic music in particular exists in a chicken-or-the-egg
relationship. Much of Shpongle’s art caters to those who see with their
third eye, or at least have taken something to make their other two
eyes pop wide open. But when contextualized against rave music that is
fueled by self-serving “love” drugs, or basement electronic styles that
pair aggressive music with tranquilizers, Shpongle is mellow and
holistic music that will take you on a trip with or without drugs.

“Someone could say, ‘What’s it like to be on acid?’ And
to confer that experience into language, I think it’s an extremely poor
medium,” Posford says. “It’s like having a vocabulary of five words to
describe it. Music provides the extra keys on the typewriter you need
to express the whole experience.”

Shpongle’s songs start from mental images conjured by
Posford and Raja Ram, who conceptualize the music as surreal landscapes
of light and color. Posford describes a few from Shpongle’s first
album: a lake shimmering in the sky; a journey to a waterfall amongst
whirlpools and giant moths, with the “massive, raw power of [the
waterfall] pounding on you; then you go through the waterfall into
another sort of reality — the drips from the cave and the echoey space
of the cavern,” he says.

Whether your imagination can handle this journey without chemical assistance is not Posford’s concern.

“I really have no judgments on what people want to do at
my shows at all,” he says. “Whatever floats your boat, really. The
music is out there, so listen in any state you like. I would be
disappointed as an artist if my music could only be appreciated by
people on drugs. I would sort of have failed, because I myself am not
on drugs all the time, so I want music I can listen to when I’m driving
or sitting around at home, or reading, or whatever.”

If you can quietly read a book while a time-warping
jester face blasts lasers from its mouth, you probably need to tell
your drug dealer he was scammed.

Correction: A previous version of this article should have stated Joe Russo was in Furthur, not the Grateful Dead.