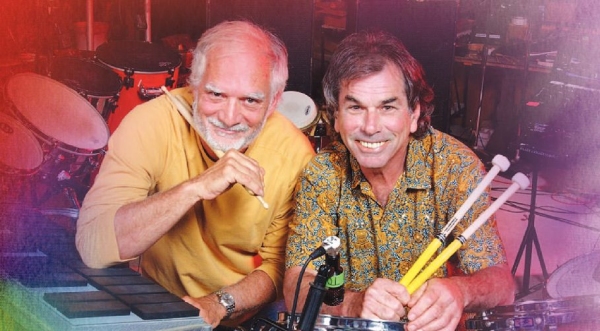 “It was one of his funny little remarks after we got off the stage,” says former Grateful Dead drummer Mickey Hart, explaining how Jerry Garcia gave the Grateful Dead’s percussion section its name. “It was like, ‘You guys sound like devils. You’re rhythm devils.’ It was one of those kinds of moments. And it kinda stuck. People started calling the drums and space part of the show ‘Rhythm Devils.’”

The Rhythm Devils segment of Grateful Dead shows began in the mid-’70s, when percussionists Bill Kreutzmann and Mickey Hart began doing extended drum sessions that tied the first set of the performance to the second set. While some audience members took the opportunity to get beer, the bulk of the crowd remained glued in their seats, transfixed at the sheer display of power issuing from the stage.

The whole phenomenon known as “The Rhythm Devils” gelled in the public mind when Francis Ford Coppola approached the two musicians to lay down a percussion-based soundtrack for the 1979 film Apocalypse Now. After experiencing a Grateful Dead performance at the Winterland ballroom in San Francisco, Coppola was captivated by the primeval and transcendent qualities of the band’s percussion section. The film — based on Joseph Conrad’s classic, Heart of Darkness — captures a river journey penetrating the dankest depths of jungle — symbolizing the descent of the narrator into the primordial tangles and recesses of the unconscious mind.

If all of this sounds Jungian, that’s because it is. On the Grateful Dead stage, the Rhythm Devils reproduced this journey every night during the “drums/space” segment of the performance, but using percussion instruments as the transportation vehicle rather than literary symbolism. Anchoring the film with the Rhythm Devils’ percussion score became the perfect marriage of visuals and sound, resulting in one of America’s most celebrated cinematic masterpieces.

“It was a great honor to be part of that amazing movie,” Hart says. “It was a thrill. Francis thought that music itself was 50 percent of the emotional payload that you need to get from a film. He was different from everybody else; he thought that sound was really important.

This moved the experience in the theater up quite a few notches.”

Hart explains that
Coppola was so concerned about the sound element that he even went so
far as to install new state-of-the-art Meyer sound systems (the same
system used by the Grateful Dead) in theaters where the movie was
opening. For Hart and Kreutzmann, the experience opened a wealth of new
avenues to explore with percussion. The existing repertory of available
instruments proved to be too limiting for the Rhythm Devils, forcing
them to design and build original percussion instruments just for the
film.

“The Beast”
— one of the Rhythm Devils’ most well-known instruments played
religiously during Grateful Dead performances — was born during those
sessions, along with a mountain of other instruments. Even today, from
using tangled knots of centuries-old grapevine root to innovating
high-tech sound devices, Hart remains a passionate instrument builder.
And he attributes the tradition to Apocalypse Now.

“When
Francis showed me the movie, there were no drums that existed on this
planet that could really coexist with the visual component of that
film, so we had to build them. [Grateful Dead roadie] Ramrod and I made
these big giant steel drums and put ’em up in the air, and that’s what
we used for the air strike at the end — the last six minuteswith all those monstrous sounds.

So I learned how to be an instrument builder as well during the Apocalypse Now sessions.”

The outtakes from the film were released in 1983 as The Rhythm Devils Play River Music, an
album that’s emblematic of the most developmentally visionary epoch of
the Grateful Dead’s long, strange trip. After Jerry Garcia’s 1995
death, the Rhythm Devils disbanded, with Kreutzmann playing
sporadically with different musicians as he pursued his other passion
as a digital artist. Meanwhile, Hart continued on with his world music
ensemble, the Global Drum Project, when he wasn’t working with the
Smithsonian Institute preserving archaic recordings of world music and
Americana. Eventually, Kreutzmann and Hart would reunite in the new
millennium to tour on the Furthur Festival with The Other Ones, and
later for The Dead, which continued into 2009.

Those
who caught The Dead on their last tour were treated to a new twist in
the Rhythm Devils performance when Mickey Hart introduced one of his
current projects, “Rhythms of the Universe,” which sonically
transported fans to various celestial bodies — or what Hart calls
“events” — across the cosmos. Working with leading physicists, computer
scientists and NASA, Hart’s idea is to transpose light waves into sound
waves, giving listeners a glance at exactly what the universe sounds
like.

“In a way
it’s like playing with the sound of God,” says Hart. “That’s my
perception of it all, ‘the hand of God’ — whatever you want to call it
— it was the creational force that blew us all into existence. It’s
really a lot of fun, to say the least. We started with the Big Bang and
wound up on earth. We went to Saturn, to Jupiter. We went to Mars. In
23 days we went to 23 different zones.”

While
Hart continues to refine this project, Kreutzmann has been staying busy
touring and recording with his new band, 7 Walkers, which boasts among
its ranks guitarist Papa Mali, multiinstrumentalist Matt Hubbard and
bassist Reed Mathis. But if you go to the Rhythm Devils show, don’t
expect to hear anything from Kreutzmann’s or Hart’s many side projects.
As Hart says, “It’s not that kind of zone.”

What
to expect? Back in 2006, the Rhythm Devils toured for the first time
with a full instrumental band that included Phish bassist Mike Gordon,
guitarist Steve Kimmock, vocalist Jen Durkin (Deep Banana Blackout),
and Nigerian percussionist Sikiru Adepoju. A huge success, that tour
featured songs that ran the gamut from percussionbased strains of
classic Dead tracks to a handful of brand new songs written by Jerry
Garcia’s longtime songwriting foil, Robert Hunter, who has also penned
a mixed bag of new material for the current tour.

“They’re
Bob Hunter at his finest,” Hart says. “Just impressive words. He can
spin a great story. It’s very powerful lyrically, and it goes really
well with our new music.”

Joining
the Rhythm Devils this time around are guitarist Davy Knowles from
Backdoor Slam and bassist Andy Hess. Meanwhile, multi-instrumentalist
Keller Williams will be fronting the band on the summer half of the
tour, with Tim Bluhm from The Mother Hips taking up residence for the
justannounced fall leg.

“We’re
playing with different players, and we’re also exploring some new
spaces. A little more electronic. It’s like riding a real comfortable
horse. You’ve got the blues. You’ve got rock ’n’ roll. You’ve got this
world music component to it. It’s kind of an interesting brew. A lot of
spice. I don’t know what you’d call it, but it makes you dance and it
makes you smile, and that’s really what we’re after.”