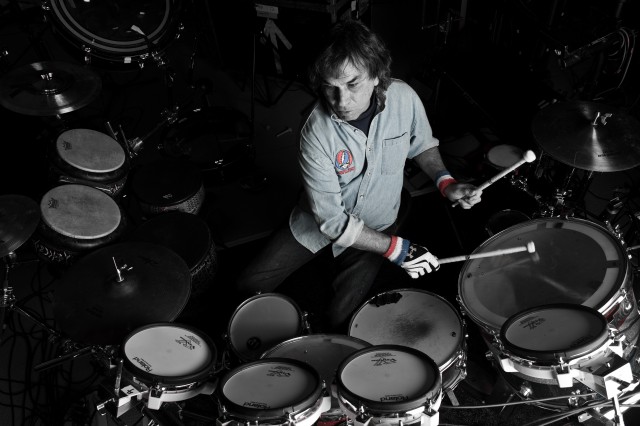 When iconic Grateful Dead drummer and ethno-musicologist Mickey Hart rolls his band through town on Dec. 9, he’ll be bringing along a little of the cosmos.

Hart’s latest enterprise, in collaboration with scientists at Lawrence Livermore Labs and engineers at Meyer Sound Laboratory in Berkeley, revolves around tapping the sounds of space — literally — and converting them into musical compositions, both in an electronic and standard rock band context.

When you consider it, and find a way to wrap your head around it, it’s a logical step for a guy who’s been deeply invested in promoting global music for much of his professional life. Call this exo-global.

Even with a better-than-pedestrian fluency in the concepts of Big Bang background radiation mapping and radio astronomy, we had difficulty understanding the mechanics of all this. Hart was happy to oblige with a dissertation from a tour stop in Seattle last week, early in the winter leg of his band’s tour.

“I’ve been working on translating light waves from radio telescopes into sound waves,” Hart explained. “One of the avenues we’re pursuing is having a conversation with the cosmos, starting at 13.7 billion years ago. The Big Bang. Which, we now know what it sounds like.

“We take the signal in waveform and put it into a very serious algorithm, in a computer, usually slowing it down because of the speed of the waveform. When it comes to us, it’s pretty inharmonic. Space is pretty noisy — lots of collisions, whirling, a lot of chirping, bump-’n’-grinding. When it gets to me, I sound-design it. I take some piece of it, elongate it, do this or do that, arpeggiate it, add some reverb to it. Put the screws to it and put it into the music. Have some fun with it. That’s the art of it.”

Hart’s experiments with cosmic noise are an extension of the work done several years ago by astronomer Mark Whittle at the University of Virginia, who devised a way to translate background Big Bang microwave radiation into sound, expanding on the discoveries of Arno Penzias and Robert Wilson of Bell Labs in 1963.

“It’s interesting. I mean, it tells our story,” Hart says. “I’ve been doing global music my whole life, but this now extends the horizon into the universe. Which has always fascinated me, my book’s about that. Y’know, as  a rhythmist, I’ve written about the beginning of time and space. The ‘seed sound.’ But until recently, there was no way for us to actually hear it and sample it.”

This current project, which first took to the road last August and is built around a band featuring Dave Schools on bass, longtime collaborator and talking drum master Sikiru Adepoju, vocalists Tim Hockenberry and Crystal Monee Hall, guitarist Gawain Mathews, drummer Inkx Herman and keyboardist Ben Yonas, takes a December and January lap around the East Coast and Midwest, and by the time spring rolls around, a CD should emerge, with songwriting help from Dead lyricist Robert Hunter.

Hart is pleased with the band’s progress, and equally happy to keep this tour a small-venue proposition, something he appreciates acutely after so many years on the enormo-dome circuit.

“Oh yeah, much more fun,” Hart explains. “Y’know, in the old days, you never even got to see anybody. It was limo to the coliseum and back, and to the plane and then to the coliseum again. … It was always a shell, and you really couldn’t move around in it or have a good time, other than playing the performance.

“But this is a lifestyle. I like the bus; you get to see what’s going on out there. Today I went and visited a high school, gave a little talk there. It was cool to see the kids and listen to what was on their minds.

“And the clubs are good. You can see audience, they can see you, you can see their eyeballs. You can feel them. You can’t do that in a stadium. Sometimes playing those stages, you don’t know if there are people out there, you can’t see anything from up there.”

Before we turned Hart loose to finish up sound check, we couldn’t help but note that this was Grammy nomination week, and that it had been 20 years since Hart released Planet Drum, his global percussion tour de force, the recipient of the first Grammy for World Music, and a watershed for Hart’s passion for global percussion that had extended back to his teen years.

“Oh indeed,” Hart agreed. “It was a milestone on many levels. It was the first percussion band that ever charted, for one thing. They had to create a whole new category for it, ‘world music.’ “It took drums to a whole new place where it could compete with melodic and harmonic instruments. … It elevated percussion to a place of equality in the world orchestra.”