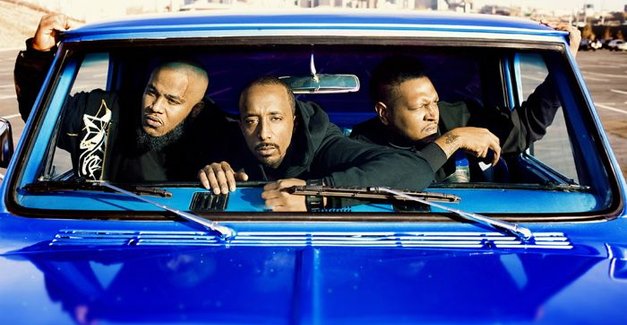 The Denver hip-hop trio BLKHRTS is seeing that some people are having a hard time trying to classify the type of music they make. The music is dark and aggressive and influenced by industrial and punk rock like Joy Division and The Misfits. The trio, which consists of Yonnas Abraham, King FOE and Karma tha Voice, dress in all black, give menacing looks from the stage, and when the music drops, go crazy. One writer called their style “goth rap.”

“We are not Marilyn Manson,” Yonnas says. “The term ‘goth’ means a million things to a million different people, but I think that to me, it’s a culture and it’s definitely been able to describe my aesthetics, which is the dark and the beautiful, the romantic and also the macabre. But I think those things have been explored before. I think Wu-Tang is goth rap, I think Gravediggaz is the prototypical goth-rap group. So I read it in articles and people say that about my music, I’m like, ‘Oh wow.’”

There’s no black eyeliner or any type of make-up, no crazy hair or leather chains and whips. And although the lyrics have depth and explore a darker side of life with themes of sex, drugs and violence, don’t expect any kind of depressive atmosphere.

“We do have people, bloggers and writers, saying it’s goth rap, it’s this, it’s that. But yeah, that shit is wack,” says King FOE. “Don’t get me wrong, we dress down in black and we do our shit, I even have a song called ‘Goth Swag,’ but it’s more like this is the type of dudes we are. We aren’t some emo-ass niggas, whining about shit. But we like Bauhaus, Radiohead; we listen to other alternative shit that a lot of these dudes don’t listen to. Everyone else is trying to be all swagged out and chained out, having big chains and watches, driving on 28-inch rims and shit. We’re not trying to do that.”

The BLKHRTS formed in 2010 after years of the guys hanging out on the Denver hip-hop scene. Yonnas, who is with the group The Pirate Signal, and King FOE and Karma, who are members of the Jewell Tyme Music conglomerate, used to go to each other’s shows as well as share the stage. While The Pirate Signal had a sound that was unique in the scene, Yonnas was looking to work on things outside of that. King FOE and Karma, on the other hand, had a style that was more grounded to the streets, but they also were looking to explore ideas outside of the traditional hip-hop box. Yonnas approached them with the idea of starting the group.

“They’re both really great performers and they’re both really great rappers,” Yonnas says. “Obviously they have a lot of energy, but it’s more than that, though. It’s the nuance and the delivery of the way they performed. It was very energy-intensive but also very natural and cool to look at. It just seemed like we could really complement each other.”

The group got to work and has already released a slew of music since forming. Their first project, an EP called BLK S BTFL, was wellreceived and opened the door for the group to release two mixtapes, Su Alma Negra and Beast and another EP called CHRCH. And while the music has been well-received, the shows have been just as critically praised. With The Pirate Signal’s Chez Sheree Strong on guitar and keys and Hogans on drums, the show is high-energy and loud where neither a mosh pit nor b-boy circle would be out of place.

“It’s weird because I’m an extremely private person but on stage, that’s like my moment of freedom,” says Karma. “I just black the hell out and then those two, Yonnas and FOE, they’re crazy as hell and both come with it. For me individually, I never thought I’d find freedom in front of strangers. On stage I’m free and at peace.”

The group is now in the midst of dropping a trilogy of releases from each individual group member under the BLKHRTS banner. Yonnas was first, releasing the six-song EP Sextape (along with a eight-song prequel called Sexts) in December, King FOE is following that with his EP Junkie (he’s already released an eight-song prequel called The Junk) on May 15. At the end of the summer, Karma will release his EP, Murderball, and at the end of the year, we’ll get a debut album from the BLKHRTS.

“We wanted to showcase
all of us individually along with the group,” says King FOE about the
trilogy idea. “We want to take our time with the album because we want
to put out the best quality. Plus this is how we’re marketing BLKHRTS.
Even though we have these solo songs and even though we have these solo
albums, it’s still BLKHRTS albums, it’s all BLKHRTS shit. It’s just
like another variation of our own individual personalities.”

“We’re
too ‘individual’ to be mass marketed,” adds Yonnas. “And I guess I
feel like if you’re going to be that kind of artist you have to really
build a brand. We can’t be the kind of band where we make an EP, then
we have an album, then we’re going to blow up. We have to be the kind
of band that has a ton of music that you can immerse yourself in. If
we’re going to be idiosyncratic, there’s a whole universe there. So to
me, I feel like in the course of a year, if I can build the universe
and then drop the album, there will be a fanbase.”

Although
the group has been contacted and approached by well-known record execs
and record labels, they’re sticking to the program they’ve set up.
Being indie, in control of their art and responsibility to no one but
themselves is how the BLKHRTS want things to be.

“I just want us to be received,” Karma says. “More
than anything, we just want to be received as raw artists that you
can’t put in any particular genre or any kind of box. However the chips
fall, I put that in God’s hands. I know it’s on us to just continue to
work, stay strong and see what happens. I pray to God that one day
we’ll be doing shows overseas on some crazy shit. For now, we’ll take
the hometown love and the love we can get when we’re out of town, but
ideally, we want to be touring all over this muhfucka. Staying in
people’s face, that’s the key.”