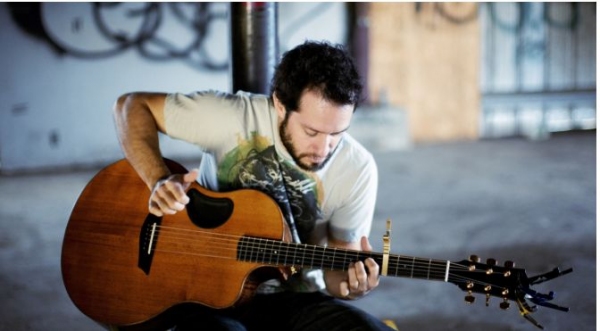 Trace Bundy did not have the typical rock star trajectory to fame. He followed his passion for guitar from a parttime teaching job to being a full-time musician.

Over the past 15 years, Bundy has toured the world and his videos have reached more than 34 million views on YouTube. He’s returning to Boulder for his sixth annual acoustic holiday show on Friday, Dec. 19 at the Boulder Theater. It’s one of Bundy’s last shows of the year, and he says it’s a good way to celebrate 2014, a year that included soldout shows in Europe and winning the ESPN SportsCenter Fan Jam contest.

“It’s a great show to end the year,” Bundy says. “I play in Boulder only once a year, even though I live here. So when I do play here, the fans rally around it and come out. It’s a really fun, high-energy show.”

Bundy picked up his first guitar at the age of 10. He found it at a yard sale and split the $10 cost with his brother.

“It was super fun and I had a knack for it early on,” Bundy says. “I have a pretty bad singing voice, which I thought was a terrible curse of mine. But it was a blessing in disguise because I ended up putting all my energy into just playing guitar. I think of the guitar as my voice, in a way.”

Dreams of being a rock star were far from Bundy’s mind — his focus was just improving his skills. He was selftaught and mostly learned from guitar magazines. Gradually, he started mastering different techniques, like fingerstyle and two-handed tapping. It’s these techniques and fast finger work that have earned him the nickname the “Guitar Ninja.”

With his brother, Bundy used to play electric guitar and even some Metallica. But he says it was a little too angry for him, and he instead got inspired by ’60s and ’70s folky artists like James Taylor and Simon and Garfunkel. He also put away the electric guitar, and his real passion became acoustic. He says he likes all the sounds he can make with it and how he can play it anywhere without needing an amp.

On stage, Bundy says he likes to be innovative and pull out surprises with his instrument. He likes to stretch the acoustic guitar enough to essentially become a one-man band. He uses the guitar as a percussion instrument and, with different effects, Bundy can make it sound like a bell, organ or synthesizer. He also experiments with capos — using multiple, cutting holes in them and pulling them off during the song.

Before Bundy was a full-time musician, he studied civil engineering at the University of Colorado. He then got his master’s degree and started teaching classes. His logical side, he says, benefits his music.

“If you write music purely out of an analytic mindset, it’ll sound robotic and ordinary,” he says. “The analytical part of my brain helps me figure out the music theory and learn the rules of music. The right brain helped me learn the artistic side of music. It helped me break the rules and come up with something more interesting and more beautiful to listen to.”

While teaching, Bundy would still play shows and fly all over the country on the weekends, but be back Monday morning for classes. His music distribution had humble beginnings. First he made a few CDs for family and friends by burning them on his computer and then going to Kinko’s to print the album cover. He then began selling them for $5 at shows and soon realized he had sold more than 800 that way. Since then, he says he’s tried to maintain that kind of simple sensibility.

“I’ve always been big into the independent scene,” Bundy says. “I’ve intentionally tried to keep it very independent. So it’s not like a major label and huge company that does everything for me. It’s been a very grassroots style and about a connection between me and my fans. It’s a cool and organic process, and that’s what I wanted. The passion behind it can really get sucked away if it becomes too corporate.”

It was when he was at CU that Bundy’s music took off. He realized he was turning down shows because of teaching, so he decided to completely focus on his music. Now he’s been at it for the past 10 years with no other jobs.

“Most musicians will put all their eggs in that one basket and try so hard to make it work, and sometimes it does, sometimes it doesn’t,” he says. “I tell new musicians who ask for my advice to pursue it as a hobby and perfect it as much as you can. And if it’s meant to be, those doors will start opening.”