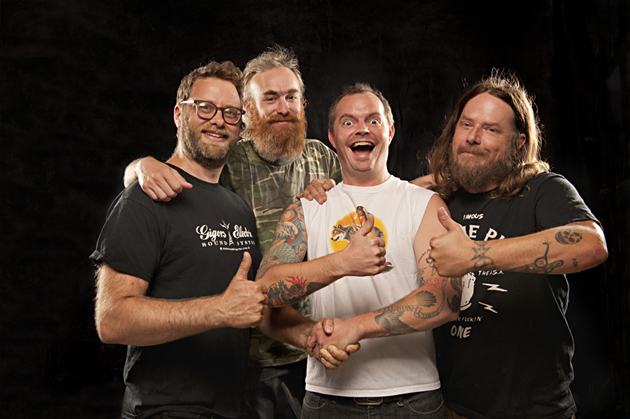 Not many modern metal groups are featured on NPR’s First Listen or routinely garner nearly a halfmillion YouTube views when a new music video is released. But Portland sludge-rock favorite Red Fang, which plays the Gothic Theatre in Denver this Friday night, has a unique way of maintaining a sense of unbridled fun, for both band and listener, while playing remarkably heavy songs with remarkably dark lyrics.

Murder the Mountains, Red Fang’s critically acclaimed 2011 sophomore longplay, was accompanied by an exceptionally whimsical video for the song “Wires,” which hilariously features the band spending a $5,000 check from its record label — ostensibly meant to cover the video’s production budget — on junk food, beer, a used car and miscellaneous items (from gallons of milk to furniture) the members of Red Fang jubilantly run over with the car. It was literally a smash hit, quickly becoming a YouTube sensation and making Red Fang as close to a household name as underground metal bands get.

Probably not since Suicidal Tendencies’ legendary 1983 “Institutionalized” video has a metal group so creatively and successfully roped audiences who might not normally listen to heavy music into its unrelenting lyrics and music with a brilliantly comical video.

“The ‘Wires’ video is amazing and turned us on to a lot of new people for sure,” Beam says. “Making [it] was definitely about as much fun as you can have making a video. I mean, come on, we got to smash shit with a car all day. Duh. It was all our buddy Whitey McConnaughey’s idea. He is a genius for ideas like that. He’s made all our videos so far.”

Not surprisingly, Beam remembers the glam-metal act Twisted Sister, with its memorable videos starring Animal House’s Mark Metcalf, as “the first band I got interested in, and it was definitely because of the video for ‘We’re Not Gonna Take It.’”

Still, despite the more widespread attention brought by numerous whimsical music videos — and a performance on The Late Show with David Letterman, of all places, with Paul Shaffer sitting in — Beam says Red Fang isn’t focused on homogenizing its image or sound for a wider audience.

“We’ve never written any rules for ourselves,” Beam says. “No, I lied. We wrote one rule: If we all like it, it can be a Red Fang song. Doesn’t matter at all what it sounds like or how heavy or light it is.”

Beam, whose “first favorite pop song” was “Private Eyes” by Hall & Oates, insists there is no musical formula for Red Fang, despite the obvious influences of early metal such as Black Sabbath and the gory lyrics of sadistic greats like Samhain.

“Each of us listens to and appreciates pretty diverse music, and I think that definitely affects our songwriting,” he says. “Our fundamental form of expression, no matter what we are listening to or thinking about when we are writing, is dark and heavy…[but] we don’t really think about trying to achieve a balance.”

“Speaking just for myself, it’s really just whatever comes out when I put the pen to paper. Usually it is some sort of expression, whether direct or symbolic, of emotional shit I am trying to process. Sometimes I don’t even know what the hell a song is about until months after writing it.”

The term “stoner rock” has been used in regards to Red Fang’s music, which continued its thick, driving — but well short of hardcore as far as tempo goes — tendencies on last year’s Whales and Leeches. The crunchy psychedelia of classic stoner rockers such as Kyuss is missing, but the pounding drums, dark themes and God-size rhythm guitar of Sabbath’s surely stoner-rock early ’70s material are crucial to Red Fang’s big, imposing metal. Not that Beam pays any mind to how his group gets labeled.

“I feel like stoner rock has blossomed as a genre in the last five years or so, to the point where there is basically a formula for making a stoner band,” he says. “We do not fit that formula…but if you enjoy smoking weed while listening to us, then I guess we are [stoner rock]. I guess I don’t really care, because ultimately, labels are sort of useless.

“I think the closest you can come to describing what a band sounds like is to do one of those formulas where it’s like Black Sabbath plus Hot Snakes plus Balkan Brass Music minus trumpet solos equals Red Fang. But that still is obviously not 100 percent effective, and genre names are convenient and people like them, so whatever.”

Red Fang, more than anything else, embodies what Flea once called “playing ferocious music as a healthy release of anger…turning a source of misery into something beautiful.” No matter how you choose to describe Red Fang’s sound, it’s obviously an impressive feat to gain such widespread appeal while juxtaposing such uncompromisingly heavy music with lyrics like “just before I take you / paint your lips with blood / you’ve stripped away the skin / babe frothing at the teeth / carry him to me, his blood like cream.”

It’s no sin for Red Fang to acquire much of that mainstream attention, which no doubt has helped the group book its mighty metal into some major festivals this summer, by making music videos featuring such unforgettable sights as a zombie ripping a bloody fist through Fred Armison’s rib cage Alienstyle in a dive bar just to snatch a can of Tecate from the Portlandia star. The videos are veritable sugar to get the medicine (Red Fang’s searing live shows) down and deliver what the band calls “The Joy of Red Fang.”

“I can’t speak for anyone else, but for me, expressing darkness through the music and lyrics means that I have purged it in a way, and then I don’t carry it with me, so I don’t act like a goth,” says Beam.