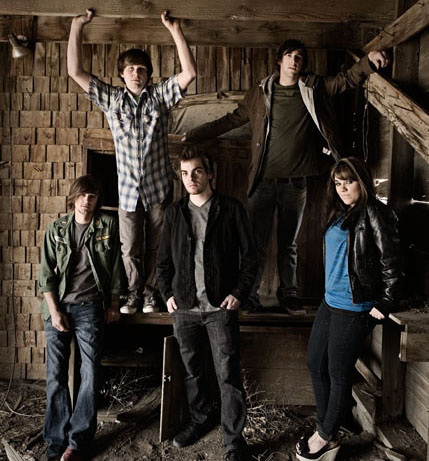 It could well be that Nautical Mile’s EP release at the Fox Theatre this weekend represents a watershed moment — the young band’s second release, headlining a premiere venue among well-regarded local bands, secure in its lineup and coasting on a decent club following and critical buzz.

But a chat with guitarist and band co-founder James Anderson the other day left us with the inescapable sense that the band is still deeply committed to the callous-building toils of working the local stages, maturing their sound — sometimes the hardest thing for a band to keep its focus on — and for now, maybe not much else.

It all started quickly, back in 2009, when Anderson submitted an entry for a spot on KTCL’s Big Gig, more or less as a Hail Mary.

“It was kinda scary, getting on that first Big Gig,” Anderson remembers. “I honestly submitted a song, saying, ‘There’s no way we’ll ever get into this. We don’t have a chance.’ I mean, we were brand new, we’d literally played, like, four or five shows before that first Big Gig … and then I find out we’re in the top 10, and then a couple of weeks later I find out we’re fourth, and we’re playing that show.

“We had, like, no experience playing live shows at all. I felt like a lot of people had a lot of expectations for us. It was scary how quickly it got going because of the radio’s promotion.”

That was summer of 2009, back when lead singer Rachel Hamilton was fronting the group. Countless local spots later, Nautical Mile has weathered a few personnel changes, notably the replacement of Hamilton with Janaya Spink, whose full-on belting delivers the band into somewhat darker and heavier territory.

“We played our CD release last year at the Fox and right after that we found out our old singer Rachel didn’t really want to continue on with the band,” Anderson says. “So we held some try-outs and found our new singer.

“Some of Rachel’s songs we’re still playing. … We had a couple of radio singles that we kind of had to keep — one of them [“Hourglass”] we re-recorded — and a couple of others are still in the set for now.

“We really wanted to redefine our sound when we went into the studio this time. I feel like our first album was just kind of a straight-up pop-punk album. … I mean, we were really happy with it. We got good stuff done with that first album, but we really wanted to make something different, something a little more ‘us’ this time. We went into the studio without a producer — we just self-produced the album with the engineer. It’s a little more rocking, I think there’s a little more of our musical influences.”

The Fox crowd, hanging through a three-band opening bill, shouldn’t be disappointed. We were particularly impressed by the sprawling “Two Roads,” a multi-sectioned piece assembled from low-register metal-riffing hooks, wall-punching guitar breaks and Spink’s alternately urgent and pleading vocals, equal parts rock classicism and post-indie abandon, even summoning a hint of soul.

Comparisons between Hamilton and Spink will be inevitable, and by now they are mostly reconciled by the band’s local devotees — Hamilton brought a keen and incisive pop sensibility to the group, but Spink confronts the band’s heavier instincts and sings into the music, teasing its heft and coaxing it to follow.

Anderson promises that the Fox gig will feature some new music (both from the EP, which is accessible on the Fox’s website, and new material as yet unrecorded). Any Fox gig for a younger band is always a treat, but if Anderson is sensing a building tailwind, he isn’t letting on. For now, talk of a label deal or out-of-town touring is just speculation — Anderson wants to get through this gig and isn’t treating it as a gimme.

“I feel like we got a lot of pressure on us for this show, too,” he says.

“We picked all the bands to play with us on the CD release show, and we have some really good bands. The Heyday, they’ve been around forever, they’ve been really good for a really long time. And Sundown Social, they played with us at our CD release last year, so they’re at a really high level too. … So we got really, really good bands playing with us, it’s a lot pressure following up acts like that. We gotta be on par with these guys.”