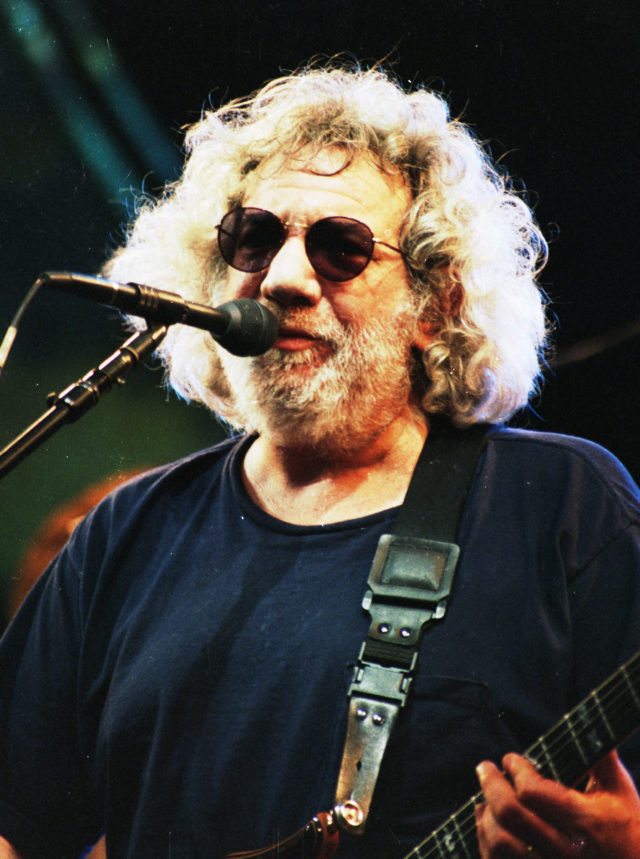 “You can’t ride the rails anymore in this country, but you can follow the Grateful Dead.” —Jerry Garcia.

During the first half of the ’80s, I jumped on the Grateful Dead “bus” and took off on a ride that was enlightening and, sometimes, a little dangerous. Following the band allowed for travel, mind-expansion, and what felt like a kind of counter-cultural consciousness. I attended my first Dead show at 17, in June of 1984, and after that, caught the legendary ensemble whenever I could—during summer vacations, while in college, and even for a few years post-graduation. The pull of the group’s not-always-controlled chaos was strong.

In the Grammy-nominated documentary A Long Strange Trip (directed by Amir Bar-Lev), New Yorker writer and longtime Dead fan Nick Paumgarten speaks to the unique rite of social-cum-musical passage that is Deadheadism, sharing his observations as a young fan of the band:

“In 1984 . . . the [Grateful Dead] still were a strange, forgotten, almost ’60s cult that was sort of shambling around America pretty much ignored by the culture at large,” Paumgarten reflects. “It was a pretty intense, small scene. It was overwhelming, and it was kind of scary. The sense of menace was always there. Bikers would go, rough guys, and there were drunks . . . And sometimes it was just a madhouse. I remember survival sort of being part of the experience.”

Paumgarten’s take is spot-on. The element of danger at Grateful Dead shows was no joke; there were heavy drugs, rowdy crowds and even some untimely deaths among band members and fans. This darker aspect of the group and its culture was reflected in its artistry. Where many found spiritual awakening and pastoral idylls, the Dead’s songbook also spoke of addiction, emotional despair and the hollowness of the American dream. The band’s origins are rooted in the social experimentation of the ’60s, when intellectuals and artists mingled with members of the Hells Angels, and the young musicians provided a kind of interactive soundtrack for the anything-goes Acid Tests on the West Coast. It was a strong and volatile brew that birthed them.

In the years following its modest beginnings, the band and its growing audience slowly gathered force, eventually snowballing into a musical and social juggernaut. In the ’70s, ’80s and even part of the ’90s, when the Grateful Dead was hitting on all cylinders, there was genuine devotion in the air, along with everything that comes with rearranging the consciousness of thousands of people from night to night. As a result, the group’s fanbase proliferated and diversified.

“The Grateful Dead were about a radical inclusivity,” notes Long Strange Trip director Bar-Lev. “There was no one way to be a Deadhead. Everybody was welcome—motorcyclists, newbies, gate-crashers, psycho right-wingers. They’re like the musical Statue of Liberty,” he muses.

Perhaps the most appealing reflection of the culture was Jerry Garcia himself. Standing somewhere between a well-worn teddy bear and a friendly biker, the reluctant band-leader, who was once described as looking like “an unmade bed,” became a globally recognized symbol of hippiedom and a musical giant in his own right. Garcia was said to be the sun around which the other members of the band revolved, or the glue that held them together. Whatever the metaphor, he carried the kind of authenticity that inspired cult-like passion. Jerry had the uncanny ability to unite the band, the audience, and what occasionally seemed like the cosmos in a whirling, almost forbidden celebration. His wry wit and innate talent were part of the group’s allure. Garcia’s fabled solos ran the gamut of emotional spaces and stylistic borrowings, inspiring other musicians and rearranging listeners’ minds along the way. Dead & Company member John Mayer has remarked, “It would take six guitarists handing off the guitar to each other to accomplish what Jerry could play in one solo.”

Enter present-day Dead & Co., an ensemble that seeks to serve up some of the legendary magic from the Grateful Dead’s cauldron. Longtime devotees of the Dead might boggle over how a group that once choppered in and out of Woodstock and the eerie fields of Altamont morphed into a health-conscious outfit fronted by a sometimes pop-crooner in designer sneakers and an expensive watch. Yet as the lead guitarist and co-front man, Mayer, while no Jerry, appeared to have found firm footing in the mix this summer; and Bob Weir, despite the wear-and-tear on his body and vocal cords, has held up impressively for someone who has logged almost non-stop stage time spanning more than half a century. Bassist Oteil Burbridge stands in gamely for the perhaps irreplaceable Phil Lesh (a subject of controversy among some fans, as Lesh continues to field his own projects on the side); and due to occasional health concerns, original drummer Bill Kreutzmann began sharing his drum duties this summer with Jay Lane (formerly of Weir’s side project RatDog and the alt-rock group Primus). The historically cursed keyboard slot has been filled by the stable and well-considered Jeff Chimenti (also a RatDog alum). Despite its naysayers, and the questionable shifts in sound and tempo to the group’s well-loved oeuvre, the fans still appear to revel in the scene and the music, which remains alive in the hands of those who continue to play it. Weir has inherited Garcia’s mantle as the current outfit’s gray-bearded leader, and he, along with the Grateful Dead’s original drummers, deserve respect for admirably soldiering on. The younger members of the tribe have learned from the elders and have committed themselves to the language of the music, the demands of the tour, and the legacy of the tradition. Seven years into the act, the latest manifestation of the Dead, if a bit self-conscious at times, carries the venerable torch for a new generation of listeners as well as the old. Dead & Co. strives to keep the storied fires burning and the crowds still gather to witness it. Rumors that the band might call it quits this year are plausible, although the overall organism seems loath to expire.

While the hard-core freaks and the wild-eyed fanaticism of yore are mostly gone or mellowed, nothing is ever completely out of the question at a Dead-related show. The occasional scuffles among “wookies” in the parking lots still crop up, and naked dancing is apparently a thing again; although now, one is more likely to encounter weekend warriors channeling their glory days via this latest and ever-morphing iteration of the band. There’s nothing wrong with the new strain, though it isn’t quite the original article. The Dead scene, along with society, has evolved to what appears to be a slightly safer and slicker version of the type of adventure that Garcia once described.

All of this might beg the question: Were the Grateful Dead simply societal misfits looking for an in? The answer is partly yes, but also that they were genuine cosmic trailblazers who gave a certain portion of America what it wanted. Jerry famously quipped, “We were always selling, it’s just that people weren’t buying.” How things change. Some speculate that there are more fans of the music now than when Captain Trips passed to the great jam in the sky in 1995. The distance from real art to banal commercialization is never far and the clichéd refrain of “It wasn’t what it once was” is always readily at hand; but the continuation of the long strange trip provides affirmation and fresh experiences for aging veterans while also creating an opportunity for new seekers to step into the tie-dyed continuum.

At its best, the Dead might be a conduit for America to sort out its tribal struggles and learn its own mind. There are the moments for which the fans live—the unpredictable instances in which the stars align and the group-consciousness reveals itself as the band and crowd blows its collective top. This is why people continue to join the party and why the remaining acts, with new members coming in as the old ones go, keep playing. What the Dead have created over the years is no small feat. Sure, you can buy a Steal Your Face shirt at Target these days, and the music of Dead & Co. can be more sluggish and softer than the days of Garcia, but on the right night, the beast still rears what’s left of its psychedelic head and the dance continues.

Nick Hutchinson is a freelance music writer and the author/editor of Channeling Jerry: How The Music Plays his Fans and High on a Mountain: An Oral History of Jamgrass in Colorado—both are available online through BookBaby Book Shop.