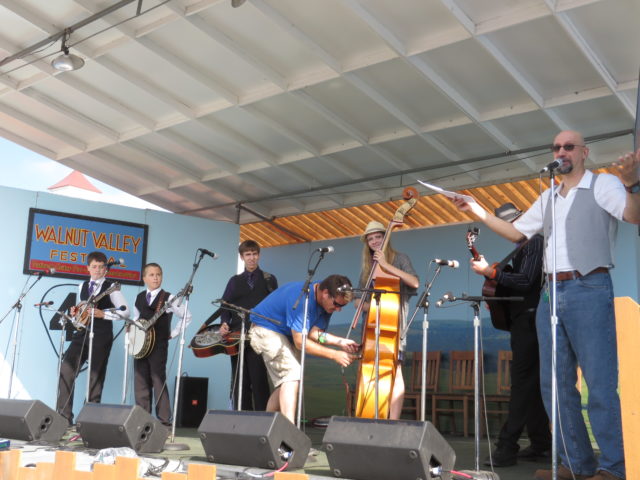 Courtesy of Andy May

Andy May is a soft-spoken man who calls children “youngsters” and adults “folks.” His talent as a musician and teacher is undisputed, but he’s likely best known as the founder of the Acoustic Kids Showcase.

The showcase is a non-competitive “Opry-style” performance program that allows musicians 17 and younger to perform on professional stages at festivals around the country. On Aug. 13, May’s “acoustic kids” took to the Guitar Center Stage at Guitar Town in Copper, CO.

“I’m an artist, a guitarist, a singer-songwriter, a performer, a band leader and many things as well as an educator,” May explains. “I’ve produced many records and won awards but this is something different. Acoustic Kids is something kind of, well I don’t know what. Some people say it’s my legacy. I hope it’s not a bad legacy to have.”

The first Acoustic Kids event took place in the 1980s in Fort Collins, where May was, at the time, producing music and teaching.

“Back then there was the Midwinter Bluegrass Festival held each year in Fort Collins and I went to the fella’ who ran that festival, Mr. Ken Seaman, and said, ‘What about giving some youngsters the opportunity to perform?’” May says. “I explained the philosophy behind it: that it’s not a contest but an opportunity for deserving youngsters to perform in front of an audience at a real, legitimate venue. Ken thought it was a great idea and so began the first Acoustic Kids program.”

The program grew from there. In 1991, Bob Redford, head of the Walnut Valley Festival in Winfield, Kansas, happened to be sitting in the audience at an Acoustic Kids Showcase at Midwinter Fest. Redford approached May about bringing Acoustic Kids to Walnut Valley and, 25 years later, the program is still a staple.

“Thousands of youngsters have gone through the Acoustic Kids program there, including a bunch of 11- and 12-year-olds by the name of Nickel Creek,” May says. Now, Acoustic Kids also participates in MerleFest in Wilkesboro, North Carolina, and, as of last year, at Copper Mountain’s Guitar Town festival.

While there is an audition process for the kids who join the program, one of May’s goals is to give anyone who can benefit from the program a chance to participate. “If they’re ready for stage, it doesn’t matter if they’re beginners or highly advanced, we accept them all as long as the opportunity will be worth while for them — as long as it’s something they really want to do,” May says. “If they can do a job that they can look back on and be proud of in the future — something that can capture the audiences’ imagination and attention, that’s what we’re looking for in Acoustic Kids.”

And, yes, May does welcome beginners into the program quite warmly. But the “highly advanced” Acoustic Kids, what May now calls the Acoustic Kids Ambassadors, are likely to leave audience members slack-jawed at the sight of their tiny, pre-teen fingers flying across the strings of their guitars or violins with skill well beyond their years.

Among these gifted Acoustic Kids Ambassadors is 13-year-old Ruth Shumway. Ruth has been playing fiddle as an Acoustic Kid at MerleFest since she was 4 years old. “She would carry her violin with her to music events like that, just in case she could play with someone,” says her mother, Mary Shumway.

It’s tough to imagine 4-year-old Ruth’s tiny hands lugging a violin around a national festival, the preschooler desperately hoping to jump on stage in front of a large crowd of people, but she denies ever feeling anxiety around performing.

“It was just fun and enjoyable and everyone was doing it and I wanted to do it, too,” Ruth says.

Ruth’s mother, Mary, has her own thoughts on the lack of nerves among Acoustic Kids.

“Andy told us that his criterion was that each kid has a positive experience,” she says. “I think that because Ruth had those opportunities she never developed anxiety. It just always seemed like something that everyone did.”

Nearly all of the Acoustic Kids participate in competitions on the side — fiddler’s conventions in Ruth’s case — that entail higher stakes and a more serious demeanor. And while Ruth admits she enjoys the competitive atmosphere at these conventions, she sees the benefits of May’s approach clearly.

“Acoustic Kids has definitely fostered my level of performing,” Ruth says. “I’ve met a number of great friends there, unlike competition where you don’t really talk to the other kids performing.”

And, unlike competition, Andy May’s Acoustic Kids was built to be what he thought a young musician’s experience should be. It should be communal, supportive and respectful.

“If they’re up there, there’s a reason they’re up there and they’re treated with respect. There’s nothing condescending about it,” May says. Simply put, and wholeheartedly enforced.