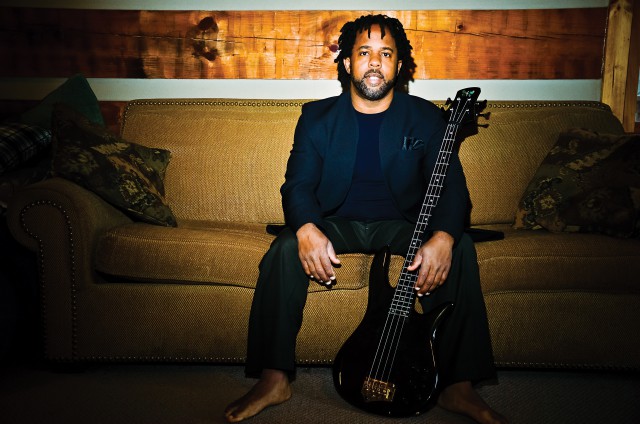 Wooten, best known for his bass-playing bravado with BÃ©la
Fleck and the Flecktones, where his mastery of his jazzy, rambunctious sounds helped
win the band five Grammys, got his start at only 2 years old when his brothers
taught him to play bass for their band. By the time he was 5, Wooten was
already playing live shows.

“It sounds like a story but it’s the truth,” he says. “When
I was born, my four older brothers already knew they needed a bass player to
complete the family band, so that became me right away. And it was my oldest
brother Regi who actually taught me how to play the instrument, but I credit
all of them with helping me to play music.”

Much in the same way his older brothers taught him to play
bass, Wooten has been on a 13-year mission to help people of all ages learn
instruments through camps and workshops he hosts in his home state of
Tennessee.

“I’ve done a lot of camps, and people love ’em,” he says.
“We’ve actually had a whole high school bring their music department and spend
five days with us at our camp facility. We get a lot of teenagers and adults
alike. The oldest has been 74 so far. We also do a couple of camps that go down
to age 8 a few times a year. But we teach any instrument, any level, any style
of music and for the most part any age.”

While it’s easy for Wooten to play without over-thinking
chords or doting on self-criticism, the bassist recognizes that many people can
have a difficult time letting go of doubt and simply jamming out. Wooten says
that’s part of what his camp tries to teach aspiring musicians.

“My approach to music and the instrumentation and writing is
really like Nike says: ‘Just do it,’” he says. “A lot of people are afraid to
do it because they think it may come out wrong. And I kind of get rid of right
and wrong and just do it. Because you’ve got to start somewhere, and it’s like
when you talk: how we’re talking right now, we’re not judging it as whether it’s
right or wrong, we’re just saying what’s on our mind, and right or wrong
doesn’t really even play into it. But there’s something that gets in the way
when it’s time for musicians to play. A lot of the time we have to ask too many
questions like what key? Or what’s the time signature? Rather than just
listening and feeling. So my approach is just approaching it naturally.”

But when Wooten says “naturally” he means just that — a
return to mother nature. Wooten embraces his inner Gaia when playing and teaching
music.

“Natural just means being like nature, and most musicians
exclude nature in that process of becoming natural, which in my opinion is a
huge mistake,” he says. “When you follow the examples of nature, you’ll realize
a bird is not singing to try to be right or wrong, it’s just singing because
the sun came up. A squirrel doesn’t have to practice to build a nest, they’re
just born knowing how to do it, and that’s the wonderful natural ability that we
all have as humans. The same way that a dancer doesn’t have to think to start
dancing, they just feel the music. A singer doesn’t have to think to start
singing, the music tells him or her what to sing.”

Wooten carries this philosophy on tour with him as he and
his band prepare to play a wide array of instruments, including keyboard,
trombone, cello, and the trumpet.

“Later in the tour I’ll be playing violin and euphonium,” he
says. “So we’re doing all sorts of fun things.”

Touring with Bela Fleck and the Flecktones over the past 20
years has allowed Wooten to come to Boulder often.

“Boulder is one of my favorite cities in the world,” he
says. “I love that place. I have lots of friends there and I always have good
support from that town. I’m definitely looking forward to getting back.”

Victor
Wooten Band
performs at the Boulder Theater on Thursday, July 12. Doors at 7 p.m. Tickets
are $23 in advance, $27 day of show.