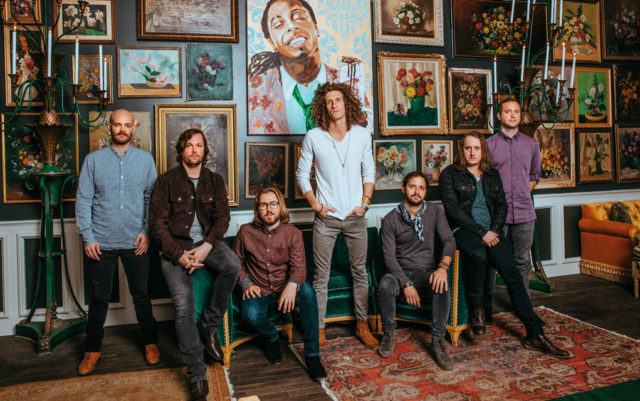 Lyons is a great little town that they’re trying to keep a secret, but I don’t know. I think the secret’s out by now,” says bassist George Gekas. The same could be said for his band, The Revivalists, a seven-piece New Orleans-based group that’s been playing together for more than a decade, but only recently launched into the national spotlight with their third album, 2015’s Men Against Mountains.

Named one of the 10 new artists you need to know in 2016 by Rolling Stone, the band’s style can be hard to peg down, mixing elements of Southern blues, R&B and soul with their decidedly alternative rock persona, which often drifts into jam band-type sessions featuring a pedal steel guitar and brass.

“We’re definitely a rock band and we’re not afraid to say that,” Gekas says. But, “we’ve never tried to put ourselves in one box. … Because there’s so many of us and we’re so different, it allows us to take on different forms and bop around from different styles.”

The group is undeniably influenced by the sounds of the city that gave birth to it. There’s music pretty much everywhere you turn in New Orleans, from the buskers on the corner to the famous clubs of Bourbon Street to the jazz funerals that march through town with hundreds of people following a brass band in honor of a loved one.

“It’s such a part of the cultural identity and way of life and town that it’s hard to not have it affect you. You can’t really escape it,” Gekas says. “It becomes a part of who you are and it’s one of those places where the longer you live there, the harder it is to leave.”

The band writes songs “every which way possible,” from start to finish in the studio to off of a jam at a live session, with all seven members offering thoughts on where to go next.

“It’s never formulaic in the way it has to happen. There’s always a way to grab the song and go a little deeper,” Gekas says. The combination of opinions can be chaotic at times but more often than not the band generally all knows when a song needs to go a certain way.

“I’ve heard of three pieces that have way more [trouble] than the seven of us do,” Gekas says.

Any number of band members share writing credit on different songs, but for the breakout hit “Wish I Knew You,” the credit goes to Gekas and frontman David Shaw.

The band was in the studio, Gekas says, finishing up the last few tracks on the album. But this particular song just wasn’t sitting right with the group.

“And we kinda just started bare bones from nothing again,” Gekas says. They started jamming in the recording booth, trying to get into some sort of groove to move the song forward.

“I guess I came up with a bass line and it took off from there and we reworked the entire song completely around there,” he says. “We could tell the producer was getting really amped and excited about it and so were the engineers.”

It reminds Gekas of the way Guns N’ Roses wrote “Sweet Child ‘O Mine,” Slash “mockingly playing [the guitar part] like it was a circus piece.” But then the song became a fan favorite, launching the band’s career.

“You’re just never going to know what the people are going to attach to,” Gekas says. “If everybody could guess it right, it’d be a very different industry. It’s a lottery almost and sometimes you get lucky with hard work and perseverance and people connect to something on a meaningful level.”

Whatever The Revivalists are doing, it’s working. “Wish I Knew You” reached no. 1 on Billboard’s Alternative Songs chart in May of this year, and the band’s been on back-to-back sold-out tours propped up by a growing community of fans, or self-proclaimed “Rev heads,” who have really “taken on a life of their own.”

“They’re in it for the long haul,” Gekas says. “They’re just as happy about the new-come success as we are because we are their band. We’re part of their family and the music is what brings us together.”