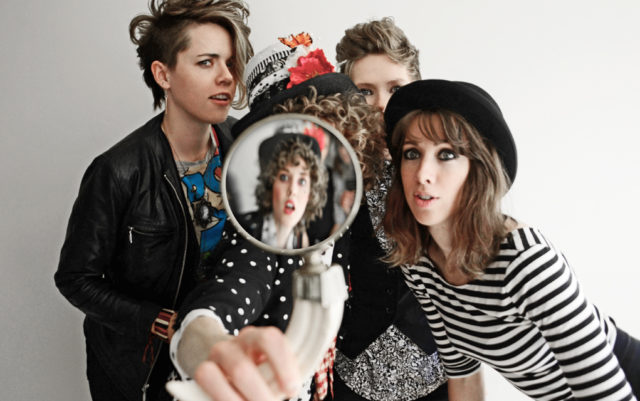 Eva Holbrook is sitting in the bedroom of her childhood home outside of Fort Collins when we touch base via phone. She’s there for a bit of rest in the midst of a coast-to-coast tour with her band SHEL. The indie folk group has been traveling the country in promotion of their newest album Just Crazy Enough.

But SHEL isn’t just Holbrook’s band; the three other members — Sarah, Hannah and Liza — are also her sisters.

Over the phone, Holbrook tells me she’s doing a “clothing capsule challenge” where she prunes her wardrobe back to just the essentials, creating one capsule of clothes for summer and another for performances.

“There’s this amazing documentary called The True Cost, and it’s basically about the effects that our demands for cheap clothing have on [developing] countries,” she explains. Her bandmate sisters are also doing the challenge, and the group asked their fans to try it too, tagging SHEL on Instagram and Twitter with pictures of their own capsules.

“You need very little to have a wonderful wardrobe,” Holbrook tells me. “And cutting back your wardrobe makes you more intentional and it brings attention to the fashion industry and how bloated and crazy it is.”

Holbrook’s thoughtful nature shows itself again and again throughout our conversation, whether she’s talking about being homeschooled on a farm in an abandoned trailer park, how terrible she was at mandolin as a child or staying up until 2 in the morning reading about female circumcision. Holbrook seems to think about everything, and everything seems worthy of deeper inspection — or introspection.

The album had already been recorded in Nashville (with equally admired producer/engineer Brent Maher, who’s worked with SHEL for around seven years) when the band was introduced to Stewart.

“He really wanted to work with us and explained his concept; he wanted to do a lot of synth programming and drum programming, and we’d never done anything like that before, so we were a bit skeptical,” Holbrook admits.

In particular, Stewart liked a groovy earworm called “You Could Be My Baby.” So the band sent him the track with acoustic instruments and traditional drums. Along with engineer Mike Douglas, Stewart added programming underneath the track and sent the new version back to the band.

“It just opened up all this potential for our sound that was really inspiring,” Holbrook says. “Everybody thought here are these traditional instruments, so it must be a folk band, but we grew up listening to Pink Floyd, The Beatles and Led Zeppelin, so we felt we were trying to write more in that vein and that vision came through for this album.”

The band took on another unusual challenge on the new record by covering Metallica’s “Enter Sandman.” It was actually the Holbrook sisters’ father who suggested the girls cover the seminal metal hit. He’d heard the song on the radio while driving and called Eva to ask if she’d ever heard it.

“It was funny because I’m a big Peter Pan fan; that’s why Dad suggested it in the first place,” she says. “When I Googled the lyrics to figure out who it was, and listening to the song [for the first time], my heart was racing because I really loved the lyrics. It was an incredible experience to hear it for the first time.”

Holbrook wanted to “pay homage to the brilliance of the song” in a way that was distinct from the original material — no electric guitars, just a sharp focus on the lyrics.

“The first time we recorded it and I’m singing it, I’m thinking about being swept away, even when you have a nightmare and wake up and your fears completely grip you,” Holbrook says.

The band changed the chords around a bit and the end result is a mystical, fairytale-like sound that retains the song’s dark timbre.

“In doing that, I was seeing things that were dark and strange and beautiful,” Holbrook says of their arrangement. “For me it’s just kind of an escape.”

The lyrics take center stage in the SHEL version, creating an ability to examine the words of a song that many have listened to dozens of times without actually hearing.

SHEL extends their artistic vision beyond their music by developing and shooting their own music videos. Sarah, who plays violin and guitar, handles the majority of the videography.

Eva Holbrook says they are creating videos for all 10 tracks on Just Crazy Enough, with five videos already done. They are storyboarding and location hunting for the next five videos.

“We have a lot of irons in the fire and we don’t know what’s going to happen with them but we’re optimistic that we’ll keep finding things to create and be excited about,” Holbrook says. “That’s what keeps us going. We’ve found a way to remain in love with the process.”