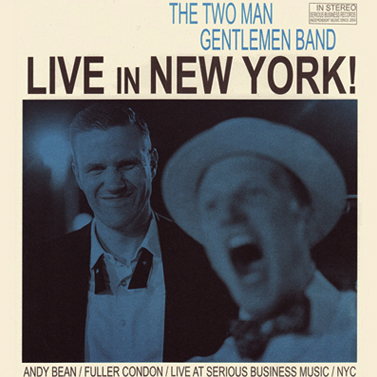 When I initially received a disc of Live in New York! by The Two Man Gentlemen Band, I had severe reservations. Novelty music is the slipperiest slope a group can climb. When it’s good it’s as funny as the greatest standup comics, but when it’s bad it’s more annoying than Dane Cook giving you mosquito bites.

However, when I popped the disc in and took it for a spin, I was more than pleasantly surprised. The copious musical talent of the gents, their respectable early 20th century country influences, and the over-the-top charisma of their act performed in a crammed Manhattan loft one lazy summer evening in 2009 all add up to a stupendously fun time. They won my ears and heart over with skill and haste.

Eventually I came to the conclusion that they’re not really a novelty band at all, they’re just a really fun band. The way they work the crowd on their live album is palpable; you share in the revelry that the audience had nearly a year ago. Whether they’re racing through sly songs like “Prime Numbers” or slowly tiptoeing through a vaudevillian number like “I Can Get Drunk And I Can Sing Songs,” the band has the audience members so closely tied on a string that they’re all practically a part of the act.

The performance is a year old, and the live disc (the band’s fifth), was released back in January, but the album is so endearing that even now it feels like a lively and refreshing experience. The idea of the band is so quirky and unexpected that it throws its listeners into a blissful state of disbelief. I just never would have thought that anyone would have had the guts to make an old-time Flight Of The Conchords.

Occasionally the band breaks form completely and performs songs that have no comedic value, best summed up by their fifth number, the classic “Summertime.” But for the most part, the band maintains an impeccable cool-yet-funny atmosphere that the audience and listener can’t get enough of.

The highlights of the act are the audience participation. When bassist Fuller Condon declares to the crowd “let’s plummet to New Jersey” on their final number “The Hindenburg Disaster,” the whole crowd screams like a berserk yet oddly sophisticated beer hall brawl.

The overall attraction of The Two Man Gentlemen Band is best described as retro quirk. They manage to find the humor in subjects like mathematics, fancy beers, and William Howard Taft. If not for their unmistakable country sound, they would almost be a They Might Be Giants cover band.

It’s this kind of bizarre presence that has amassed the respect that the two-man group has today. Since their beginnings in 2006, the gents have gone from playing for tips in New York City’s subway stations to opening for Bob Dylan and Willie Nelson. There’s just something about their charming ways that make these boys irresistible to each and every person their music reaches.

Live in New York! is the kind of jolly spectacle that’s hard to come by these days. It’s comedy without cynicism that we all could use a fresh breath of. If you have a bad day, you should come home, run hot water in the bathtub, and put this album on.