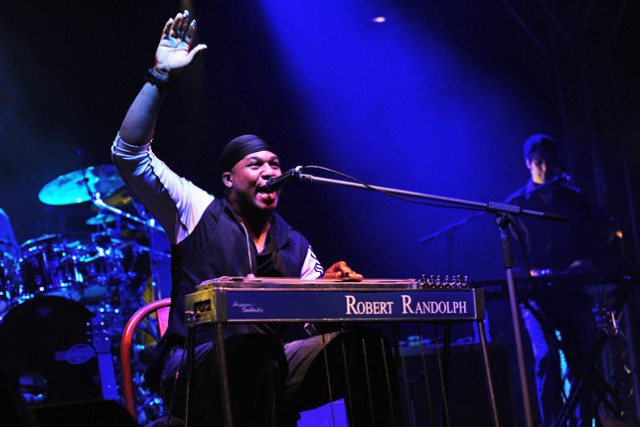 NedFest is set to launch for the 16th year in a row this weekend with new acts, good beer and old mountain hospitality.

The music and arts festival is known for its relaxed atmosphere, says NedFest organizer Kristen McFarland, and is entertaining for both kids and adults.

McFarland added that there are “lots of young families, kind of hippie kid families” and that everyone is “very, very laid back.”

Doors open Friday at 5:30 p.m. at the fairgrounds in Nederland. Saturday and Sunday festivities begin at 11:30 a.m.

McFarland says the appeal of NedFest is that festival-goers are able to see live acts in a unique setting.

“It’s kind of an intimate festival in that you’re never more than a couple hundred feet from the stage,” McFarland says, adding that many of the acts are “fan favorites.” Acts vary from bluegrass to jam band rock to jazz.

The festival starts with Bill Nershi’s (of the String Cheese Incident) Blue Planet featuring fellow Cheeser Keith Moseley and several other musicians. They’re followed by the Jeff Austin Band, headed by the former mandolinist and singer of the Yonder Mountain String Band.

Making their first appearance at the festival is Robert Randolph and the Family Band, who will headline Saturday night’s lineup. On Sunday, guitarists Paul Barrere and Fred Tackett of the band Little Feat will join “New Orleans Funk” band the New Orleans Suspects to close out the festival.

“[We looked for] somebody that would fit for our crowd and that we could afford,” says McFarland. “I wanted to get Little Feat but couldn’t get ‘em all so I got part of them.”

In between sets, smaller acoustic acts will take the stage for “tweener” sets to keep the crunch going.

There will also be late night performances down the road at the Black Forest Restaurant from 10:30 p.m. to 1 a.m. on Friday and Saturday. Grant Farm plays on Friday and Galaxy Agent plays Saturday.

Three local breweries — Left Hand Brewing Company, Very Nice Brewing Company and Boulder Beer — as well as Boulder’s Redstone Meadery are sponsoring the event and their brews will be available throughout the festival.

Artist booths will be set up throughout the festival grounds with work from local painters, sculptors, jewelry makers and more.

Attendees are allowed to camp overnight at the festival, though McFarland says many people who enjoy the festival are locals Nederlanders.

“We have a lot of people from right in the native area,” says McFarland. “Really a very small percentage of the crowd, maybe 10 percent, camps. We have people from out of state but I would say it’s mostly a Colorado crowd.”

If you do choose to camp, which is designated for nearby Chipeta Park, space is limited and both RVs and trailers are allowed. Camping is allowed Friday and Saturday night and you must buy a pass for both nights even if you intend only to stay one night.

The festival is also “zero waste,” meaning there will be recycling and compost stations through the fairgrounds and attendees are asked to bring any trash they accumulate over their time at NedFest back home for disposal.

“We’ve had recycling and composting for maybe half the years [NedFest has occurred] and we just keep working toward getting more and more people really aware,” says McFarland. “Unfortunately, even people that consider themselves environmentalists will be brain-dead and will put a recycling thing in the garbage, so we have a whole recycling team that corrects people — not to their face, but they go in and sort everything.”

McFarland says tickets, which start at $50 for a one-day pass and go up to $135 for a three-day pass, are still available. Camping tickets are $30 for Friday and Saturday night combined.

“NedFest is never sold out but it does come close,” McFarland says.

It’s important to note that NedFest is closed to dogs, so leave lil’ Namaste at home if you plan to attend.

For more information on NedFest or to buy tickets, visit www.nedfest.org.