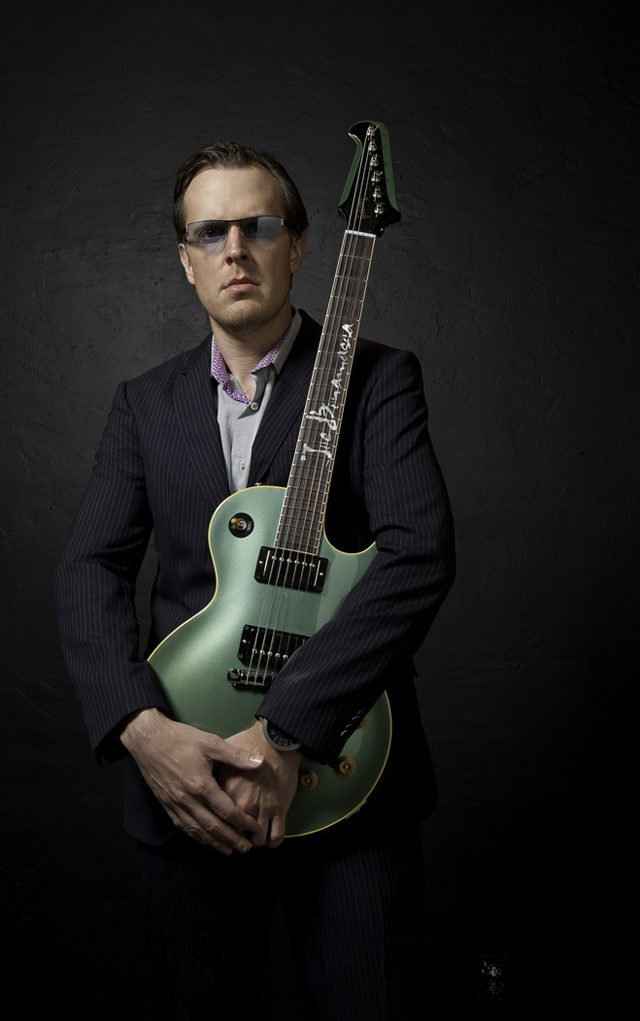 Blues-rocker Joe Bonamassa has made a habit of choosing a specific theme or musical direction before recording many of his solo albums.

For his new album, Blues of Desperation, the concept came from Bonamassa’s long-time producer Kevin Shirley, who wanted the album to feature not one but two drummers.

In a recent phone interview, Bonamassa says he wasn’t sold on the drummer format when Shirley presented it.

“You’d probably have to ask the two drummers, Greg (Morrow) and Anton (Fig), and they’d probably say the same thing: ‘We don’t think this is going to work, frankly,’” Bonamassa says. “And I didn’t think it was going to work. But Kevin has this thing, when he hears something and he knows how to put the right people in the room to achieve that. You cannot discount that for one minute. That’s why he’s a great producer.”

The presence of two drummers on Blues of Desperation isn’t quite as apparent as it is, for instance, on Allman Brothers Band albums, where Butch Trucks and Jaimoe tended to play different but complementary patterns.

There’s some of that approach on Blues of Desperation, but more often Morrow and Fig sync up closely, resulting in fat rhythms that kick up the power on many of the album’s rockers. On “This Train,” the crackling drum track recalls the beat Aerosmith used on “Back in the Saddle.” A couple of songs (“Mountain Climbing” and the title track) have the kind of thundering beats Led Zeppelin’s John Bonham brought to that band’s music. The rolling drums on “Distant Lonesome Train” give the song a cool tribal blues feel.

“Well, the Allmans, that’s a different thing altogether,” Bonamassa says of the rhythmic approach of the new album. “That’s more of a soup, where the way we approached this was two separate parts making one beat. And if you play each part à la carte, it would almost sound disjointed and not like drums. But when you come with the two parts, and you have a straight versus a swing, I mean, that’s when it really, no pun intended, that’s when it really starts to swing.”

The potent rhythms are a selling point on Blues of Desperation, but so are the meaty guitar riffs and leads and vocal melodies that turn tunes like “This Train,” “Mountain Climbing” (with its great descending signature riff) and the notably bluesy, string-accented “No Good Place For The Lonely” into standout rockers. The album also features several first-rate ballads in “How Deep This River Runs” (which has an epic feel), the ghostly “Drive” and the more acoustic and soulful “The Valley Runs Low.”

Such songs suggest Bonamassa is doing some of the best songwriting in a career that now stretches back more than 25 years to when the Utica, New York native arrived on the scene as a pre-teen guitar prodigy playing some 20 shows with B.B. King by the time he was all of 12 years old.

But the real coming-out party for Bonamassa, now 38, came in 1995, as a featured member of the band Bloodline. That group, though, broke up after one album, and Bonamassa launched his solo career. His first significant impact came with his sixth album, 2007’s Sloe Gin.

He has followed the Sloe Gin album with seven more studio albums, including such well received titles as The Ballad of John Henry (2009), Black Rock (2010) and Driving Towards the Daylight (2012).

But where as Bonamassa, up to that point, included a good number of covers on most of his albums, he has focused on all-original material on Blues of Desperation and his 2014 album Different Shades of Blue. And after writing his original songs on his own, these two most recent albums have seen him co-write with several seasoned tunesmiths, including James House, Jeffrey Steele and Jerry Flowers.

Bonamassa says the skills of his co-writers nicely complement his strengths as a songwriter.

“Well, these guys are song guys,” he says. “These guys know the structures and they know what songs and what they don’t need. I’m a riff guy. I know how to make blues-rock. So it’s the marriage of the two.”