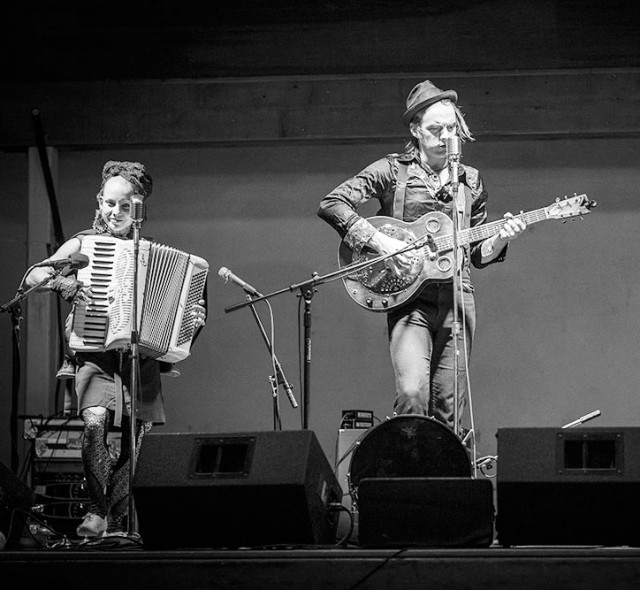 Intuitive Compass is not your average folk duo. For starters, their sound takes on more of a Vaudevillian quality than most other bands, and when it comes to their live show, let’s just say that there are bound to be some surprises.

“Usually our show will contain music and some kind of Vaudeville slapstick,” says Jason O’Dea, who in addition to singing, also plays the guitar, kazoo, harmonica and drum. “We’ve done stuff like that at the beginning of the show to get people’s attention.”

Not simply a band that is looking to play music to whoever, whenever and wherever, O’Dea and his partner, Aurelia Cohen — who sings and plays the accordion and cornet — are very interested in making an impression on audiences and engaging them. It is one thing to get up on stage, play some songs, and maybe make some random comments in between songs, but O’Dea says they are playing to their strengths by incorporating unusual entertainment elements into their shows.

“Aurelia has an extensive circus and dance background, so we’ve kind of become a Vaudeville band over the years,” O’Dea says. “Aurelia has been doing aerial silks, trapeze and stilts for a decade, so when she joined the band, we decided to incorporate a more theatrical element into the show.”

This theatricality, and the band’s ability to employ additional members depending on each concert situation, is one of the things that makes Intuitive Compass stand out. You never know what you are going to get, and the band never quite knows what they are going to do until gigs are confirmed, since a lot of their ability to perform is based on whatever limitations a venue might have. It’s all about finding creative ways to work with the space they have been given. As O’Dea recalls, they played a memorable show at The Laughing Goat — where they will be performing again on Friday, June 13 — a while back that people still talk about because of its theatrical elements.

“The Laughing Goat isn’t a very big venue, but they have a ceiling that we can rig some kind of aerial rig from,” O’Dea says. “We got a huge response from the audience the first time we were in town and did that, and in some ways we’ve been known in Boulder since then because we did aerial work in our show.”

So O’Dea and Cohen obviously know how to entertain, but their music is notable as well. You might feel like you have been sent back to the early 20th century when you hear their most recent album, Wake Up Little Song Bird. Ambling ditties like “G Minor Swing” are akin to a more stripped-down form of ragtime music, while “No Time Waltz” is, indeed, a waltz bemoaning the quick passage of time and the transient nature of our existence. Tracks like “Out in the Country” add a bit of bluegrass flair to their repertoire, and “Set Sail” is done in such a way as to make it feel like Vaudevillian folk by way of flamenco music and Middle Eastern rhythms, so there is no shortage of variety to be found.

“Before the End of Days” charms largely because of its storytelling sensibilities — think of it as a musical Craigslist ad seeking a friend before the world comes to an end — and therein lies one of the duo’s greatest strengths. The winsome title track is proof of this even though it is not specifically a story; it is a recounting of something that actually happened, and which has had a profound impact on O’Dea and Cohen’s life.

“It’s about our son coming into this world and us not wanting to let go of our dreams,” says O’Dea. “We wanted to keep moving forward with what we know how to do and what we love to do, which is to perform for folks. It’s a very honest song concerning the way I was feeling and thinking at the time.”

And just how big of an impact has their son had on their lives?

“He’s sort of known as the manager of the band, or ‘the ringleader’ as some call him,” O’Dea laughs.

So there you have it: a Vaudevillian folk duo that is managed by a 2-yearold. Sound like any band you’ve ever heard of? Well, now you have.

You know how artists are