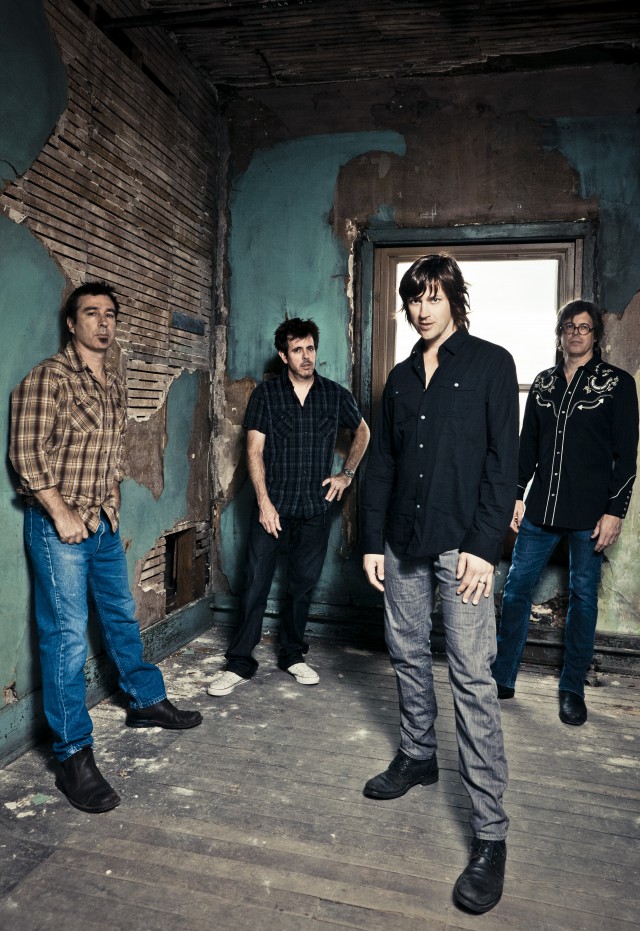 “We’ve neither burned out nor faded away. There must be a third option where you just keep plugging,” offers jovial Old 97’s frontman Rhett Miller.

Were that only the case they’d probably still be happy, but in fact, two decades in, the band’s enjoying a creative renaissance. They survived a tough stretch in the mid aughts where the Austin quartet — still boasting all its original members — came close to breaking up. They not only recovered, but assembled as outstanding a collection of songs as they’ve written since the late ’90s. It spans two albums, The Grant Theatre, Volumes I & II, released eight months apart in ’10 and ’11.

“There was a minute where it seemed pretty touch and go, but we weathered the storm, and I think it made us stronger,” he says.

The band’s blend of country twang, power pop hooks and garage swagger landed them in the same berth as forebearers The Replacements and ’90s contemporaries the Bottle Rockets. Their first two albums have their moments, and Miller’s wry cleverness peeks out from the lyrics, but it was their major label Elektra debut, 1997’s Too Far To Care, that put them on the map.

For the present tour they’re playing that album from start to finish. Like Grand Theatre, there was something cooking when they wrote those songs. Miller describes the time as “magical.”

“It hit right before cynicism crept in. It hit us right when we were at the peak of our confidence and youthfulness, and everything was clicking,” he says. “That same thing could be said about the Grand Theatre record, where we had kind of come out of the other side of this major label system’s collapse and we’re still here. So all these records in, we get to keep doing this? We get to support our family by playing these songs? It’s ridiculous and awesome.”

Miller’s witnessed the maturing of an alt-country movement that’s grown exponentially over the course of his career. These days you can’t throw a ball in a room of musicians without hitting a half-dozen beardos with a banjo or a fiddle. But while he acknowledges the growth, he doesn’t think things have changed that much.

“When we started doing this there was a real honest-to-God movement which now I think is a much bigger movement,” Miller says. “It felt like there was a real cultural force to this thing we were also ‘kind of ’ doing. But so many people were doing it in the most hackneyed Hee-Haw country way. It’s not like it’s become — it started off — schlocky. It’s such a fine line between being authentically rootsy and Americana and being Hee Haw.”

The band’s three-album run at Elektra concluded in 2001 with its fifth album, Satellite Rides. Miller’s solo career and the uncertainty of stepping back to the indies heightened tensions for a time.

“It was a growing pains kind of time for us,” Miller explains. “The label system that we’d been a part of was starting to deteriorate. I wanted to make a solo record, just because I had all these songs the band kept turning down, and Elektra really wanted to put it out. So they put out my solo record instead of a 97’s record.”

Two middling independent Old 97’s albums followed — 2004’s Drag It Up (please don’t) and 2008’s Blame It On Gravity — but they worked it out and with Grand Theatre rediscovered their groove. They’re not about to let up.

“The next record we’re talking about making is either going to be a bunch of my songs and [co-songwriter Murry Hammond]’s songs that sound like the Nuggets comps or actual covers of old ’60s garage rock songs,” Miller says. “That garage rock thing has always been a part of our sound. It got amped up the last couple records, and it’s not going away for at least an album or two.”

Miller won’t deny waxing a little nostalgic playing the album that helped make the band 15 years ago. Especially when every night he reaches “Nite Club,” the spunky little paean that threatens, “I just might get drunk tonight and burn the nightclub down.”

Miller laughs at the song’s mention.

“It really is all these years later and the same nightclub’s followed me around and it did steal my youth. It turns out what were just silly jokes were prescient,” he says. “The line every night that’s gotten more and more weird to me is the line about ‘telephones making strangers out of lovers.’ I look out at the audience and they’re not looking at the person next to them, much less me. Or they might be looking at me but it’s on their viewfinder. Weird. It is what it is. You can’t fight city hall.”