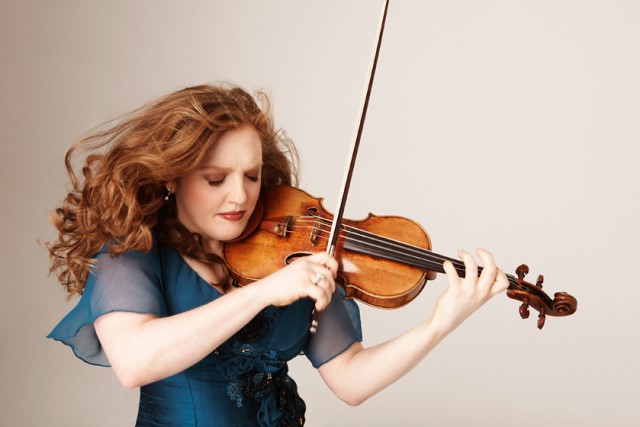 What do you call a violinist who plays concertos with orchestras, Baroque music with a period-instrument group, and heavy metal with her own rock band?

You could call her versatile “beyond belief,” like conductor Jose Serebrier did. Or you could just call her Rachel Barton Pine, since no one else performs in all three styles in the way that she does.

Pine will appear in the first role — concerto soloist with orchestra — Saturday, Jan. 11, with the Boulder Philharmonic Orchestra and conductor Michael Butterman (7:30 p.m., Macky Auditorium; http://boulderphil.org/concerts/three-bs). But that does not mean she will leave her rock sensibility at home.

“Within classical music my goal is to do the same thing [as heavy-metal bands], to give 150 percent and get everyone caught up in the emotions,” she says.

The Berg Concerto is the linchpin of this interesting program.

“The Berg has been on my list for Boulder for a long time,” Butterman says. “And this program has been completed in my mind for several years now.

I think it all works together as a unit.”

The concerto was inspired — in part — by the death of Manon Gropius, the lovely and well-loved teenaged daughter of architect Walter Gropius. The connection to Mahler is that Manon’s mother was the composer’s ex-wife Alma.

Bach is connected to the concerto too, because Berg quotes another Bach chorale about death, “Es ist genug” (It is enough). And Bach provides the link to Brahms, who used a Baroque compositional technique, and a Bach bass line, for the final movement of his Fourth Symphony.

“In this program you’re seeing ways in which subsequent German and Austrian composers have paid homage to Bach in their music,” Butterman says.

Although it was the conductor’s idea both times, Pine is quick to add, “I’m always delighted to do it. When I was 16 I did a big research project [on the concerto], reading every article about it that I could find in the library, so it’s a piece that’s very close to my heart.”

One thing Pine discovered, she says, is that “the Berg Violin Concerto is not only very intense and beautiful, but it is also an extremely personal work.” On one level, the piece is about Manon Gropius, who died of polio when she was 19. The Concerto falls into two parts, the first a musical portrayal of a playful and beloved daughter, and the second the expression of anguish at her tragic death.

But there is a second level of meaning as well. Berg himself was nearing death — the Violin Concerto was his last completed work — and the score holds hidden references to his life, including a servant girl who bore his own daughter when he was a teenager, and a later love from his adult years.

“He’s basically talking about his life,” Pine says. “It makes the piece so personal and relatable, in a way. Whatever our life path is, I think all of us have been through things like that and it makes the concerto very universal.”

As fascinating as these hidden meanings are, Pine is looking for something deeper. She explains, “The question I always come back to as a performer is, is that knowledge going to impact my interpretation?” In at least one case it does.

“When the Bach chorale comes in, Berg has a seemingly strange designation ‘amoroso’ [amorously]. Why would he write that in a piece about Manon Gropius? Understanding that he was actually thinking about his own death and [being] reunited with his true love does directly impact the way that I play that phrase. I play it in a romantic, loving way, with a hint of sensuality, something I certainly would not do if I wasn’t aware of that layer of meaning.”

But in the end, Pine says, it’s the music that matters, not the stories about the music. “Even if you have no knowledge of either the official story or the secret story, you would still be able to listen to the music just for itself and hear the different changing moods,” she says.

It won’t hurt that those moods will be conveyed with the intensity of a rock ’n’ roll, either.