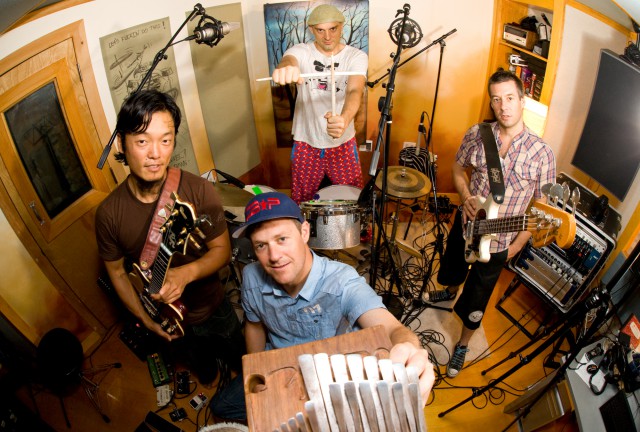 Ten years ago, musician Chris Berry found himself narrowly escaping death in Zimbabwe. He was the lead singer of the massively popular Zimbabwean band Panjea and was trying to figure out a way to break the band in the United States. That is until Zimbabwean president Robert Mugabe apparently tried to have him killed.

“He thought I was a spy from the CIA,” Berry says, more than a decade later. “I married the opposition leader’s daughter and Mugabe thought it was a ploy for the opposition to be American-backed, but he was just very paranoid. So they tried to kill me a few times and I made the decision that since it isn’t safe for me to be here, I’d come back.”

He returned to the states in 2001 after spending more than a decade having a successful music career in Zimbabwe. After discovering the music of Fela Kuti at an early age, Berry studied African dance, drums and rhythms in his hometown of Sebastopol, Calif., under master drummer Titos Sampa.

After graduating from high school, Berry made the move to Africa.

“It was the music,” he says. “I just felt like this was my path. Things snowballed for me really fast over there.”

Berry started out in the Congo, learning more about traditional tribal drumming and ceremonies. But during his time there, he started having dreams and visions of playing the mbira, a traditional African instrument sometimes described as a “thumb piano.” After counseling with his musical mentors, Berry followed his dreams to Zimbabwe, where the mbira is used heavily in Shona (a Zimbabwean ethnic group) ceremonies.

“So I got there and found these amazing people and music,” Berry says. “I started slowly getting deeper into the culture and the music, and before I knew it, I was living in a ghetto and became a singer for a traditional band.”

The band, Panjea, was received so well that they were tapped to participate in a Zimbabwean talent search and competition. The band won the entire contest, landed a record deal, and Berry began what would be a dream career in Zimbabwe. Panjea would go on to release seven albums, with some of them earning platinum sales in Zimbabwe, Mozambique and South Africa. And just as Berry was trying to take the band to the next level, Zimbabwean politics prevented it.

“I thought it was better to stay alive than to be dead … ya know?” Berry says.

Aside from the assassination attempts, most of the members of Panjea succumbed to AIDS. As a result, when Berry did return to the states, he recruited an entirely new band, but kept the Panjea name to honor those he played with in Africa.

And while Panjea is still touring and going strong with a new album, Find a Way, which hits shelves in the near future, Berry is immersed in his new project, the Chris Berry Trio, or CB3. Berry connected with New York-based electronic band The Brazilian Girls to create a new sound of traditional African rhythms mixed with the dance sounds of today.

“I wanted to experiment with more electronic music and mixing the ancient with the modern,” Berry says. “I respect The Brazilian Girls a lot and I wanted to start collaborating with them to bring that modern sound with the ancient, the grooves of the mbira and drums from Africa, and mix it with the modern electronic sound that they have. That’s where it all started. It’s an experiment that seems to be going really well now. It’s a lot more modern than what Panjea is, Panjea is a bit more world music. But with this one you can’t really say where it’s from because it’s so mixed up and sort of breaks out of world music, it’s not a world music act, ya know, even though that’s the kind of genre I’m used to being in.”

Berry says that fans have been receptive to the new sound, but he’ll be taking his time when planning out an album. There’s only one studio track from the band available, called “Regina,” but Berry plans to release new tracks every two months or so.

“It’ll be a slow, ‘stay tuned,’ track-by-track thing as we finish them in the studio and get them out to the fans,” Berry says. “And then after nine or 10 tracks, it’ll be a full album and we’ll see what we’re gonna do there. But for now, we’ll just let them out track-bytrack as we finish them.”

In the meantime, Berry’s “trio” is currently on tour, but the band itself is a sort of revolving door. The band features Berry, a bass player, a drummer and a special guest. For current and upcoming shows the band consists of special guests Michael Kang (of The String Cheese Incident), Peter Apfelbaum (of the Trey Anastasio Band) and Steve Kimock. Berry contends that the show is a high-energy, danceable experience that any music lover will be able to get into.

“We choose guest artists that can really take it to other places with a strong electronic afro-groove thing, which is kind of new, and on top of it you got this sort of soaring lead work of our guest artists,” Berry says. “Expect to dance though, it’ll be funky sounding. … It’s just very different from anything I’ve ever done, so it’s hard to describe. You just have to experience it.”