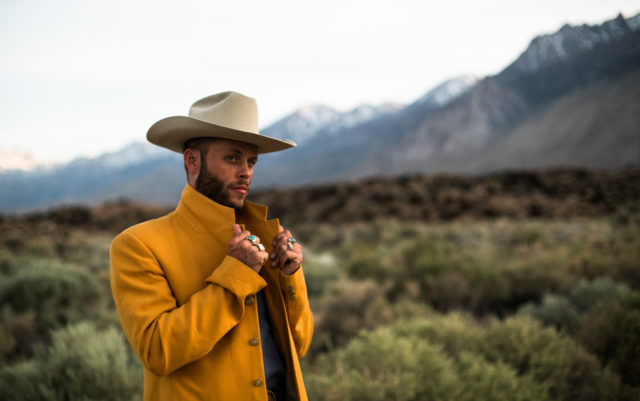 As Charley Crockett drove out of the depths of Death Valley into a field of Joshua trees, the snow began to swirl. He had just finished a tour in Arizona, sent his bus back to Texas, and rented a car, taking the back roads as he headed West. Moving into the high desert, the storm broke, revealing the unruly peaks of the Eastern Sierra. Whitney Portal stood before him, reaching its jagged and rocky edges heavenward, or at least toward the summit of Mount Whitney, the highest point in the lower 48.

“I had a vision right then and there that I needed to do something,” the country-blues musician from South Texas says months later, after he had already turned that vision into his latest record, Welcome to Hard Times.

“I had this viewpoint of this drifter kind of appearing in those Joshua trees with those snow-capped High Sierra in the background on this journey,” he says. “And that’s where the idea was born.”

The scene spoke to Crockett of transcendence, of a journey not bound by the starkness of good and evil, but full of nuance, complexity, conflict and resolution. It reminded Crockett of spaghetti westerns popularized in the 1960s — raw, gritty, often recalcitrant, heroes facing the rugged frontier juxtaposed to classic western films with “squeaky clean characters” facing off with “obvious bad men.”

“One of the interesting things about the emergence of those kind of flawed characters [in spaghetti westerns], is that they were more complex, which become more relatable to the people watching it, because life puts you in certain circumstances, and you never know what’s going to happen,” Crockett says.

Welcome to Hard Times is as much Crockett’s own story, as any dreamt up character, his own life melding with the drifter in his mind’s eye.

“I’m not saying I’ve got it the worst of anybody, but I’ve had a hard go in my life,” Crockett says in his Texan drawl. “But that’s how I ended up being a performer.”

A distant relative of folk hero Davy Crockett, Charley was born in San Benito, a tiny outpost in the Rio Grande Valley, where he grew up in a trailer outside of town. Raised by a single mother, while also spending time with an uncle in Louisiana, Crockett acknowledges “some ethnic diversity” in his lineage but focuses more on the experiences and cultures he was exposed to in his early life for shaping who he is today. That and the guitar his momma gave him at 17.

“There’s no doubt about it,” he says. “I was totally lost. Statistically, everything you can find out about me and my life and what’s happened in my life, would lead to incarceration and addiction, all kinds of things. What I grew up around and people who come from my circumstances … the expression that I found through music definitely saved me from all that.”

Also gifted with a “strong moral compass,” Crockett left Texas after high school to “hobo around and stuff.” He traveled the country, hitchhiking, freighthopping, sleeping in parks, relying on the kindness of strangers. He worked on farms and played music on the streets to get by, everywhere from New Orleans to New York to California. Along the way, he was introduced to all sorts of music and musicians, taking the outlaw country and conjuto music of West Texas and fusing it with gospel, blues, R&B, even a little hip-hop and rap thrown in. Ever the incessant traveler, it’s not unusual for Crockett to play more than 200 shows a year (barring 2020 of course.)

For Crockett, music is about wrestling through conflict — internal or external — and coming out on the other side, finding resolution in the process. It’s what keeps him rooted in country music, even as he incorporates other influences into his sound.

“There’s something impressive or something I like about how conflict can be communicated and struggled through the major key,” he says. “That’s what I love about country music is the haunting emotion that can come through music and written in the popular major key.”

Crockett’s music harkens back to the country music of yesteryear, the storytelling, the deep baritone, the quick-tempoed guitar chords set to steady snare beats. There’s a certain nostalgia to Crockett’s sound, but he’s not stuck in the past.

“I think [most people] would like to call me a preservationist or traditionalist,” Crockett says. “It’s very important for me on this album to show that no no, y’all got that wrong. I’m not just a preservationist. I’m going to bring tradition upfront and I’m going to do it in a way that you’ve never seen before, because it’s less about what I’m saying. It’s how I’m doing it. And I just think so often the folks that shake stuff up are [building on] the tradition that people have forgotten about.”

Welcome to Hard Times is Crockett’s eighth studio album since 2015, a few released as his honky-tonk alter ego Lil G.L. Some might call Crockett prolific, but that’s nothing compared to some of his heroes in country, blues and soul — folks who recorded more than 50 records in their career, he says. (For more on Crockett’s musical influences, see Heavy Rotation.)

The album was born out of a desire to make “a haunting, Gothic, dark, ’60s country record,” with producer Mark Neill, and created with a sense of urgency, he says, even more so after undergoing open heart surgery in early 2019 to fix a congenital heart condition called Wolf Parkinson’s White. Written last fall and recorded in February, it turns out the album is rather prescient for the current moment. Releasing it in the middle of a global pandemic wasn’t even a question.

“It’s like, parting the Red Sea, running through there, and then looking behind ya and it’s gone. And that’s how I felt. I couldn’t imagine sitting back and doing nothing and hoping for better days to put the record out,” he says. “Traveling entertainers and artists like myself, we tend to see society for what it is if we’re not completely blind. And so a lot of the things that I’m writing about that might be connected with people this year, they were happening last year, too.”

Not one to shut out viewpoints that don’t match his own, Crockett’s music crosses genres, as well as socioeconomic and racial boundaries, he says. It’s born out of an independent worldview nurtured by playing the hand he was dealt.

“For better or worse, I’ve dealt with a lot of negative circumstances in my life that I was able to cultivate into experience and wisdom,” he says. “In my own life, forces greater than myself led me down certain rivers, and I like the idea of swimming upstream, but you can’t swim up some currents and you gotta go where the river takes you.”