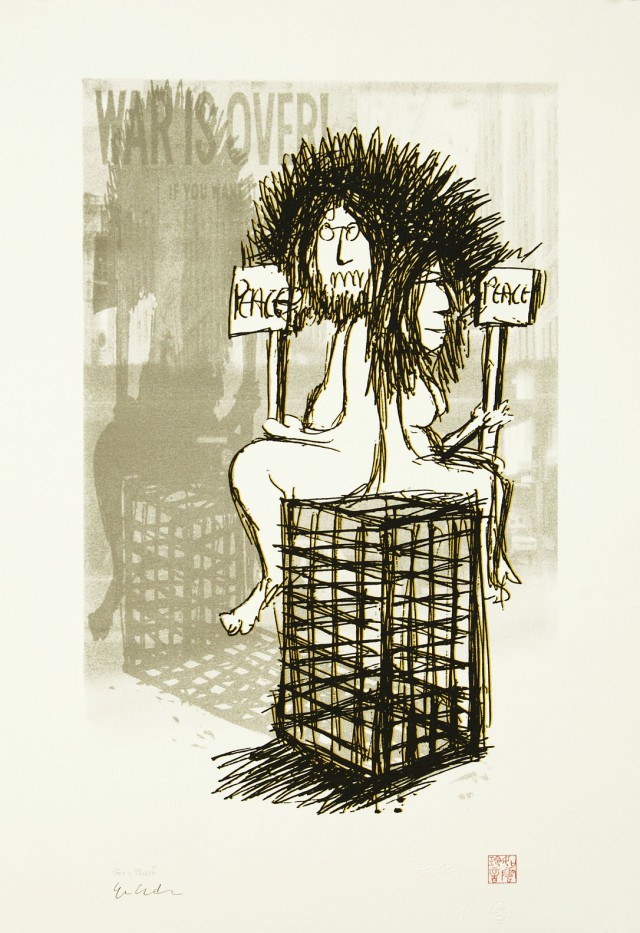 Boulder Weekly: John often expressed how much he respected your opinion as an artist. From a purely critical stance, what’s your impression of his artwork?

Yoko Ono: It’s the kind of artwork that I can’t do, that I don’t do. It’s a very different kind of thing that he was into and we were lucky that we liked each other’s work. I think that his work is very interesting because it has a sense of humor that most artwork doesn’t have. Artwork is really very famous for not having a sense of humor.

The animation kind of technique he used, not very many people were doing it in those days. But now the animation technique is “in” in the very serious art world; it’s considered to be good artwork.

BW: John hesitated to debut himself as a visual artist, and when he finally did, he was met with resistance. Why?

YO: He was always a little bit before his time in what he was doing. It’s interesting that he was doing it, but it also kind of frustrated him. Not many people said, “Oh that is great.” Especially because he was a Beatle. People thought, “Oh a Beatle is doing this, so it’s nothing.” The art world has all it’s snobbery and own standard of what should be right and he didn’t fit into that.

BW: Does it seem like people are more accepting now?

YO: I definitely think so. That’s why his shows are very, very popular.

BW: You’ve spent a lot of time in the last 20 years promoting and working with John’s artwork.

YO: That’s part of my work. If I didn’t do it I would feel very guilty. I just know that artists like to share their work and be appreciated for it and communicate with the world. He just suddenly passed away so of course he can’t do it now, so it’s very important that I do it.

BW: Do you think he would be happy to see his work touring around the United States? Would he approve of how it’s being used?

YO: Of course- he’s probably jumping with joy.

BW: Some people have criticized you for adding color to some of the prints of John’s drawings.

YO: Yes, that’s a controversial issue. The thing is, we used to do things together.

One day, the people who were setting this program up, some very professional people who are used to doing these things for artists came to me and said, “How do you like this?” They showed me one of his drawings with these bright colors. I thought, “How dare you do that!” I said, “I hope we’re not going to do this because you’re just coloring John’s work.” They told me, “We have to have color otherwise they won’t hang the work in the windows; they’ll just put it in a back room or something.” Then I said “OK, at least let me color it because John probably would not have minded it if I did it.” It was a practical situation, a practical solution. I made sure that the color was there, but not really.

In the beginning I felt so much pain about the fact that he passed away. It was kind of a burden in a way that I had to do all these things. But then I started to see that we were working together still and I just started to feel better about it.

BW: So it’s become a positive experience for you.

YO: It’s positive, but there are two sides of the coin.

BW: How do you think John’s artistic skills stand up to his musical skills?

Well, he did art in a way that he wanted to do it and that’s how he did his music too. Some people always think, well you know, his songs are simplistic or something. There was a nasty remark about, “Oh, the chords are so simple.” So? He wanted to do it that way and it really communicates very well with people.

BW: I’ve read that John considered himself more of an artist than a musician. Do you think that’s true?

YO: No, who said that? Me? I don’t think I would have said that, but you never know what I would have said. (Laughs) The thing is, he started as an artist. That’s what it was. He was very good at it. He was not very good at some things. His teacher was saying, “Maybe the best chance you have is to try to get into an art school.” And he did because he was really great at doing drawings and paintings. He was an artist first. Then he started to want to be a musician and he became a musician after being an artist. So maybe that’s what you’re talking about. He started as an artist so he had kind of the mentality of an artist. It was very interesting when we started talking to each other, he was just like another artist.

BW: Do you think that being a musician was more important to him than being an artist or were both equally important?

YO: Well, he didn’t think of what he was doing in terms of the word importance, I don’t think. Maybe joy and love. He loved to draw and of course he loved to make songs as well. It was a project of love rather than importance.

BW: I’m sure you’ve gotten to see a lot of John’s artwork that he did as a child and throughout his life. Was his work always pretty similar or did his simplistic, illustrative style emerge later in his life?

YO: It emerged later. It’s almost like Picasso — he was doing very realistic paintings and things in his blue period, back in the very serious stuff. Towards the end of his life I think he was doing something very light and beautiful. It was the same thing with John in the sense that in the beginning he was doing very heavy stuff and gradually it became lighter.

BW: Do you think that you had an influence on his artwork?

YO: No. But I was one of the admirers and I think it’s good to have an admirer instead of a critic at home. I just loved what he was doing.

BW: You really encouraged him to put himself out there as an artist, didn’t you?

YO: Well, he encouraged himself. He wanted to have exhibitions and gallery shows and stuff like that of his work. I thought that was good and of course I did encourage a little.

BW: How did he react when the Bag One fiasco happened and his drawings were confiscated? [The Bag One Portfolio was a series of drawings that were Lennon’s wedding gift to Ono. When they were displayed at the London Art Gallery in 1970, Scotland Yard confiscated eight of the pieces, which had been deemed obscene by authorities.]

BW: Why do you think that those simple drawings caused such a reaction?

BW: What have you been up to artistically? Are you still creating?

BW: Do you have a specific project you’re working on?

YO: Well, this year I’m dedicating mostly to work on John’s art. But I did a few things on the side. Next year will be more for my stuff I think.

BW: Do you have a favorite piece of John’s artwork?

YO: (Laughs) That question is a very difficult one to answer. I’m hands-on about selecting which drawings become a serigraph, so each time I’m picking something that I love. They’re beautiful, each one of them. They have a kind of vibe that only John can create.