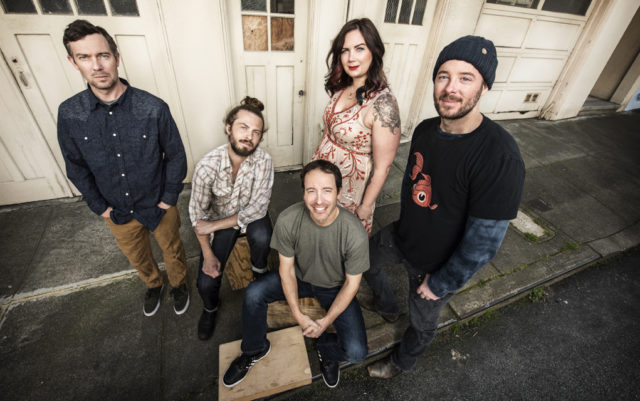 Judging by the thin strands of snow clinging to the shaded crevices, we guessed that Yonder Mountain String Band’s latest video “Alison” was shot sometime around early summer. It’s as much a video travel brochure for early spring in Telluride as a shirttail standup by the band.

“Yeah,” banjoist Dave Johnston tells us a couple of weeks ago. “We did that in June, right around the time of the festival. It was a fun video to shoot.”

The song itself, a fairly upbeat little number inspired by a pretty obscure place: an anonymous Middle English poem from the 13th century, chronicled in an obscure manuscript now held at the British Museum. Thankfully the band re-interpreted and sung it in modern English. (Kinda tough to get your point across in the original text, with lines like “Nightes when I wende and wake, Forthy mine wonges waxeth wan/Levedy, al for thine sake/Longinge is ylent me on.”) Johnston, who reads a lot of poetry, says it touches on an enduring theme.

“Me and Adam [Aijala] did the bulk of the work on that one. I guess it sort of identifies as a ‘Dave song,’ but they all come from everyone.

“It’s an old English poem, about a guy who likes a girl, who isn’t… y’know, really into him,” he laughs. “It’s not really about anyone in my life. But yeah, there’s lots of really great stuff in there.”

We look up the original.

Chaucer, maybe. Nah, predates Chaucer, who wrote in the second half of the 14th century. Chaucer-esque. Maybe, Chaucer-ish.

Johnston cracks up. “Yeah, there you go. Chaucer-ish.”

“Alison” is the first glimpse we get from YMSB’s next record, due out in the first quarter of 2017. It’s the band’s second album since fiddler Allie Kral and mandolinist Jake Jolliff joined the band in the wake of Jeff Austin’s departure in spring 2014. While Johnston struggels a bit to describe the record in handy soundbite terms, it’s pretty tough to have much perspective on a full-length release while it’s still in its incubator and the principals are still close to it. But he seems satisfied that they are fully exploring and exploiting the possibilities the five-piece format offers them.

We ask if the new members, especially the presence of a full-time fiddler, coaxed the band’s musical instincts a little bit more to traditional bluegrass territory.

“From the beginning, traditional bluegrass was never very far from the surface of what we did, even though it wasn’t something that we were trying to do,” he says. “It’s a pretty foundational form of music. John Popper categorized it as a ‘nexus’ form of music… the talent pool is wide and deep as per individual players, but bluegrass has never been about individual players. It’s almost always been about players in bands. It’s an ensemble thing.

“Something that I thought was very instinctive on our part and also very smart, and it maybe wasn’t even a conscious decision, was to go, ‘Well, bluegrass is really great music, and something that we really care about.’ When you have a fiddle, y’know, it’s like, ‘Wow, we can do fiddle tunes now or dance tunes, or whatever.’ Or maybe use that kind of music to inform what your imagination comes up with.”

Ensembles, of course, are also the product of individual personalities, playing off each other and finding their own energy within the collective mechanism. We ask Johnston if he was conscious of changes in the band’s interpersonal dynamic since Austin’s departure.

“The vibe between the five of us is very good, that’s about as specific as I can get. A lot of great things happen when you consider that camaraderie element, and how it influences how you’re going to play together,” he says.

“Jeff was definitely a one-of-a-kind personality; he did really well at being a kind of character focus, if that’s what you call it. But now I feel like we have a lot of other feelings and vibes that are picking up the focus. Like Jake is a ferocious mandolin player; he kind pulls off a nice balance between being overtly technically proficient, and also keeping a little dirt under his nails. That’s not a common thing you see very often.

When we chat, Johnston is readying himself for the band’s headlining gig at Strings & Sol at Puerto Morelos, Mexico, before heading to Colorado for a two night New Year’s eve show at Boulder Theater.

Stings & Sol of course is the annual seaside Corona Borealis of string music that everyone just enjoys too much to worry about the cultural incongruence.

“Yeah, not exactly two things you’d think would go together, but it’s a pretty fun hippy bluegrass beach party. The resort is really mellow and really accommodating. It’s a really beautiful part of Mexico,” Johnston says. “It’s always nice to get out of the cold, but it’s also nice to visit with your fans and reconnect with some of your musician friends on the beach.”